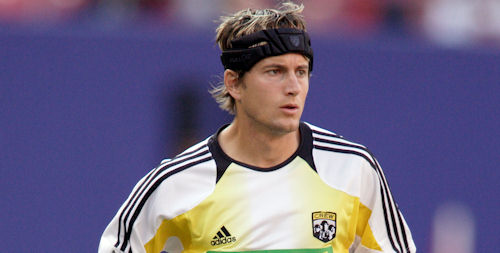 By Stefan Bondy – NEW YORK, NY (Mar 21, 2010) US Soccer Players — Despite its obvious penchant for head clashes and flying goalie fists, soccer is often overlooked as a concussion hazard, especially in a country dominated by the other “football.” But given the debilitating nature of the cases in Major League Soccer – albeit a number smaller than in the National Football League – it’s clear there’s an issue that needs to at least be explored, if not corrected.

Taylor Twellman and Chad Marshall are notable victims. So is Alecko Eskandarian, who announced recently that he’s stopped playing indefinitely because of post-concussion syndrome. Eskandarian detailed the agony and uncertainty of his recovery in an article I wrote in Thursday’s Bergen Record.

“I’m a soccer player through and through. If I could play, I would. Being an athlete my whole life, shutting it down is the worst type of torture,” Eskandarian said. “At the same time, this is my brain. It’s not a hamstring or an ankle. “I don’t care how tough you are. This about living a good life after soccer, as well. It’s really unpredictable. There’s no guarantee and you’re forced to think about these things.”

While the NFL is setting precedents with league-wide treatment guidelines, MLS has attempted other avenues of prevention.

As part of a US Soccer directive – implemented by MLS before the 2008 season – referees were instructed to give straight red cards for deliberate blows to the head. Referees are also encouraged to allow play to continue if a player is lying on the pitch, unless there’s a suspected head or neck injury.

Three years ago, MLS partnered with ImPact – a company also utilized by teams in the NFL and Major League Baseball – to promote testing and awareness of concussions. According to MLS spokesman Will Kuhns, every player is given a brain examination before the season, and teams are encouraged to consult that data whenever a head injury occurs.

But the time-line for concussion recovery is a murky area, and MLS leaves that interpretation entirely up to players and team doctors. Twellman, for instance, played eight straight league games following his concussion in 2008. Marshall sustained four concussions during a 12-month period between 2006 and 2007, ending his 2007 campaign two months early. Eskandarian sat out most of 2005 after suffering three concussions in three years.

Ross Paule was only 29 years old when he retired from the Columbus Crew because of post-concussion syndrome. Five years later, he still struggles with blurred vision and an inability to focus. Asked whether he’s played since retiring, Paule responded: “No. And I never will.”

“The symptoms are at their worse when I’m tired and sick,” he said. “It’s like the concussions broke down my immune system. It’s a serious thing, but I’ve learned to adapt.”

As head trainer of the Red Bulls, Rick Guter treated two players last year who suffered concussions during games – striker Juan Pablo Angel and goalkeeper Danny Cepero. He said there’s no public protocol for treatment, but his personal rule is that a player must be symptom-free for a week before he plays again.

Guter, who has been on the US National team medical staff since 1995, watched concussion treatments evolve from a hazy process to something scientific, particularly over the last five years.

Long-term effects now carry greater importance, he said, as well as hidden symptoms that can’t be uncovered in a conversation or a memory test. Guter also admits there that “for a long time there was quite a bit of confusion on how we should treat concussions.

“We’re more conservative than we used to be,” Guter said, while adding that most concussions among soccer players stem from head-to-head clashes or elbow-to-head clashes. “We’ve started to rely less on what the players say and more on what we see.”

Still, is it enough? Paule said the league should at least explore the idea of standard treatment guidelines. More importantly, he said, players should learn to police themselves.

“As an athlete, you’re always taught to get back out there and play with injuries and give it all,” he said. “But if something doesn’t feel right, get in and see a neurologist right away. Know the risks and get looked at.  If you don’t feel right, don’t go out there. It’s easier said than done, because when you make it the highest part of the game, you can trick yourself into believing that you’re feeling fine. Concussions aren’t something you see. It’s a complicated thing.”

Stefan Bondy covers soccer for the Bergen Record where he keeps a blog.