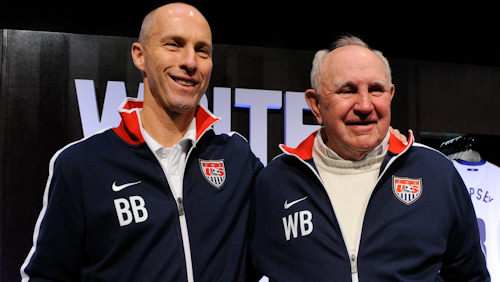 By Clemente Lisi - NEW YORK, NY (Jun 30, 2010) US Soccer Players -- The story of how the USA stunned England 1-0 at the 1950 World Cup in Brazil has been told countless times. The game winning goal by Joe Gaetjens off a pass from Walter Bahr is forever immortalized in sepia-toned photographs taken that day in Belo Horizonte, along with the subsequent celebration of the US team by Brazilian fans.

The historic goal unfolded when Bahr took a throw-in on the right in the 37th minute, unleashing a shot from 25 yards out. England goalkeeper Bert Williams was in position to make the save, but a diving header by Gaetjens changed the trajectory of the ball and it landed in the back of the net.

Bahr, now 83, continued to help soccer grow in this country following that play. Although he returned home to anonymity following the England win, Bahr coached at the NCAA level with Temple and Penn State and fathered two sons, Chris and Matt, who also went on to also use their feet as NFL placekickers.

I recently spoke with Bahr, where we discussed the USA’s performance at the World Cup, that historic 1950 game and how the sport has grown in this country over the past 60 years.

How would you assess the way the US played at this World Cup?

The US tied England in the first game. What did you think of that result?

It was a great result for us. It was important not to lose the first game and get at least a point out of the game.

This year’s US jersey has a white stripe along the side just like yours did back in 1950 as a tribute to your team. Were you happy when you saw the new US jerseys?

The design was nice back in 1950 and I’m glad they went with a similar jersey and used the same one at this World Cup. I think it helped the team.

Ever since the US was drawn into the same group as England at the World Cup draw last December, you’ve gotten a lot of attention. Does it feel good to finally get some credit for knocking off England at the 1950 World Cup?

It’s taken 60 years for many people to notice what my teammates and I accomplished at that World Cup. Better late then never I guess. It’s great to finally get some recognition. At the time, no one noticed. The newspapers didn’t mention it.

You must be recognized everywhere you go these days?

Like I said, it's nice to get the recognition. It really has been a long time coming.

What are some of the misconceptions surrounding that historic upset?

Many people, including some historians and those in our own Federation, have said what we did was a fluke. It was no fluke. The English were a very good team. The odds were 500-1 that we would win. We played our hearts out that day. We were better than them that day. There are also stories about how we walked around in straw hats and smoking cigars before the game. That never happened.

How did you celebrate the win afterward?

The crowd ran onto the field and lifted Joe (Gaetjens) on their shoulders and paraded him around the field. The crowd had really been behind us for most of the game. The English players were really good sports. They shook our hands and were respectful. In the locker room, no one said a thing. There wasn’t any champagne or anything like that.

How has soccer in this country grown in popularity since 1950?

You live in Pennsylvania and are Philly soccer icon. What does soccer mean to Philadelphia?

Philadelphia has always been a soccer town. The immigrants who lived here have always played the game and loved the sport. There was a time in the 1920s and 1930s that the US team was made up of many players from Philadelphia. The city finally has an MLS franchise in the Union and a new soccer-specific stadium.

Are you excited about them playing in the Philadelphia area?

Yes, I'm glad there is a professional team here. I think the fans will come. I attended the team’s first game and the crowd was amazing. I really think it will be a success.