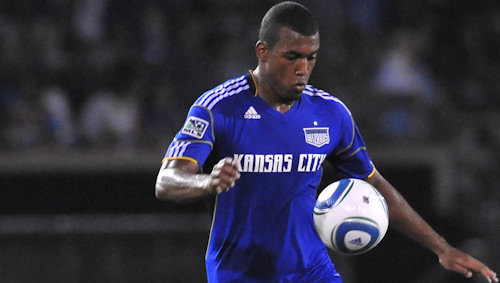 By Jason Davis – WASHINGTON, DC (Nov 15, 2010) US Soccer Players -- If Kansas City Wizards forward, University of Akron product, and 2009 Hermann Trophy winner Teal Bunbury plays in South Africa this week, he will become the latest in a long line of Hermann Trophy winners to represent the United States National Team.  Since the creation of the award, annually given to the county’s best collegiate player, Hermann Trophy winners from five different decades have gone on to represent the United States as senior internationals.  The pace has slowed in recent years, with Bunbury poised to end a six year drought in Cape Town.

The trophy’s history began in 1967, when National Professional Soccer League president Robert Hermann inaugurated the award to recognize the best college player in the country. The trophy’s second winner, 1968 recipient Manual Hernandez, went on to represent the United States twice, beginning a trend of winners appearing for the US National Team. 1969 and ‘70 winner Al Trost, a midfielder from St. Louis University and one of only three men to win the trophy in consecutive years, captained the United States throughout the 70’s. Dan Counce (1973), Steve Ralbovsky (1975), Glenn Myernick (1976) and Angelo DiBernardo (1978) all appeared for the United States.

Every Hermann Trophy winner from 1983 to 1994, starting with Duke defender Mike Jeffries through to Indiana University midfielder Brian Maisonneuve, became an US international at some point in their careers. Some winners, like Amr Aly (1984), Tom Kain (1985), and Ken Snow (1988, 1990) made a handful of appearances.  Others became regular parts of the team during a period in which the US pushed to establish a regional and worldwide profile.

The renaissance of the US National Team in the late 80’s meant more games and a larger role for the country’s best college players.  As the United States redoubled efforts to gain international credibility, college soccer proved a ready source of talent.  The Hermann Trophy was an obvious indicator of potential.

Forward Bruce Murray, the 1987 winner from Clemson, earned 86 caps over eight years and led the front line in the USA’s return to the World Cup at Italia ‘90.  At the end of his international career in 1993, Murray held the USMNT all-time goal scoring record with 21. 1989 winner Tony Meola manned the nets for the United States 100 times, holding down the National Team starting goalkeeping spot in both the 1990 and ‘94 World Cups.

In 1991, Alexi Lalas won the trophy while playing for Rutgers.  In 1992, it was goalkeeper Brad Friedel from UCLA.  In 1993, Claudio Reyna of the Universtiy of Virginia took home the award.

Together, Lalas, Friedel and Reyna combined to earn 290 caps for the United States, proving to be the most prolific trio of consecutive winners in terms of National Team contributions.  The early 90’s was the golden age of Hermann Trophy winners who would be become US internationals, and the 1994 World Cup team the culmination of the period.

The 1994 US World Cup roster included four Hermann Trophy winners: Lalas, Reyna, Friedel and Meola.  Lalas and Meola both started the Americans’ landmark victory over Colombia in that tournament. Reyna went on to represent the US 112 times over the course of 12 seasons and was a part of four World Cup teams.

Following Maisonneuve in’94, several years passed before the trophy was again won by a player who would later appear for the USA.  The changing complexion of college soccer, specifically the inclusion of more international players, led to a period of non-American winners.  Those Americans and US-eligible players who did win failed to earn a call.

The dry spell was broken by Alecko Eskandarian, 2002 winner out of Virginia, though the MLS veteran has just a single cap earned seven years ago.  Real Salt Lake defender Chris Wingert followed as trophy winner in 2003, and like Eskandarian, has a single cap to this point in his career.  Six winners since Wingert have yet to appear as US internationals or were not US-eligible.

Players that may have contended for the award in a previous generation had new options with the advent of the Bradenton Academy.  With talented young Americans taking a different path to their professional careers, the number of American Hermann Trophy winners with US caps has waned considerably.

Out of 39 winners since 1968, 19 have played for the US National Team. Of those 19, just seven have come in the last two decades.  MLS has increased the number of American professionals by leaps and bounds since 1996, both making it more difficult for Hermann winners to stick out and providing US National Team coaches with a greater array of readily visible choices.

Bunbury’s call up and potential debut is a chance to end a period of Hermann Award-irrelevancy when it comes to the US National Team.  On the flip side, Bunbury might be an anomaly in contemporary American soccer, a Hermann-winning college product who is both talented and American.  There are no guarantees that the combination will occur with any regularity.  It’s not difficult to imagine another run of Hermann Trophy winners who won’t be playing for the US National Team players.

Nevertheless, the record speaks for itself.  Over the 42 years of the award’s existence, the Hermann Trophy has given American soccer a litany of National Team contributors, players who helped return the United States to a position of prominence in both the region and the World.  The trophy’s place in American soccer history from a National Team perspective is no doubt secure.