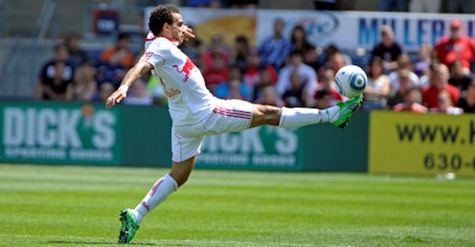 By Jason Davis – WASHINGTON, DC (Jun 30, 2011) US Soccer Players — There's a question floating about among MLS watchers these days, a natural response to some of the past year's more intriguing personnel swaps. This particular question revolves around one of the players involved, and the reasons why he’s been so quickly shifted from team to team despite a stellar resume as a top League talent. It's one of those questions that comes to dog a player no matter how much he tries to shake it, how hard he works, or how fully he does everything he's asked no matter where he goes once a whiff of it has hit the air.

The player is Dwayne De Rosario. Since leaving Houston at the end of 2009, De Rosario hasn't been able to find a stable home. He left Texas for Toronto, a local product going back to his hometown to help Major League Soccer’s first Canadian team match their results to their amazing support.  It seemed like a natural fit.

It didn’t work out. TFC was unable to find a winning formula with De Rosario on the books, slogging through two disappointing seasons that strained his relationship with the fans and the club alike. 2011 began with the midfielder off in Scotland training with Celtic, a clear sign he desperately wanted to spread his wings where the pay was better and the soccer of a higher profile.

TFC jettisoned De Rosario for an unproven (but promising) midfielder named Tony Tchani, an average left back named Danleigh Borman, and a first round draft pick on April Fool’s Day… a somewhat fitting coincidence. Despite the return TFC got for De Rosario, it was clear the club was cutting bait on their most marketable player.

New York was better, but hardly a smashing success. Playing second fiddle to the likes of Thierry Henry and Rafa Marquez, De Rosario wasn’t the central creative force he had been with both the Earthquakes/Dynamo and TFC. Age was certainly beginning to show, though De Rosario could still take a game over on his best days.

For a time, New York appeared to be the answer.  Relieved of the burden of carrying the team on his shoulders, De Rosario could go back to doing what made him a MLS Best XI selection over and over again.  He ‘s a player capable of pulling the strings on a pass or the trigger on a shot and turning the ridiculous into the sublime, almost out of nowhere.

Once again, something happened.  Be it a Hans Backe change of heart, a desire to free up cap space or – and here’s the question now floating around De Rosario, who has always had the reputation of being one of the League’s larger prima donnas – a bad fit in the Red Bull locker room. On Monday, the Red Bulls sent De Rosario down I-95 to DC, straight up for midfielder Dax McCarty. Could a “bad attitude” be to blame for De Rosario sudden and frankly shocking disposable status?

Maybe, but then again this is MLS we’re talking about where even the logical conclusion might not be accurate.  After all, Toronto and New York aren’t exactly the hallmark for stable clubs getting it right.

Dwayne Rosario is an all time MLS great, whether he ever scores another goal or completes another pass. He was that good in his prime, a player with attacking abilities that set him far apart from his MLS peers. He has iconic, time capsule goals on his resume that will long outlive his career as MLS charges into new eras. He might have been destined for a move to Europe once upon a time, but like his two-time MLS Cup rival Shalrie Joseph, nothing ever came of whispers and rumors. For better or worse, De Rosario wasn’t able to find a place to ply his trade abroad and became an MLS mainstay.

Like others, De Rosario had the misfortune to be a Designated Player-caliber talent already playing in Major League Soccer when the League instituted the rule. Despite regular raises in salary, De Rosario was never going to be flashy enough name for clubs – even in his hometown – to willingly give one of their precious few DP spots to him.

Beyond Toronto, he wasn’t a marketing linchpin, and even there his name wasn’t needed to sell tickets. In other words, De Rosario hit a glass ceiling, the same one other North American players have hit in the past. Was he taken for granted? Or was it just a case of wrong place, wrong time?

His infamous check-signing celebration while with Toronto last year seems to sum up this latter-day Dwayne De Rosario for a lot of people, even if he had a point. Still an excellent player, bitterness over his not-quite-upper-crust salary has dogged his reputation since leaving Houston.

The glory of MLS Cup titles with the Earthquakes/Dynamo franchise seems like a long, long time ago, when De Rosario was an ultra-confident swashbuckling midfielder whose out-sized personality – on and off the field – wasn’t a detriment to success. Maybe that was a function of a less scrutinized League, De Rosario’s relative youth, a coach capable of keeping him in line, or all of them together working in concert.

Whatever it was that had De Rosario on the move so much in 2011, DC United might be his last chance to prove he hasn’t lost what made him the great player he was for most of the last decade. Age isn’t De Rosario’s friend, and while United are in desperate need of a player with his particular skillset, there are significant questions as to how effective he can be at 33.

Apparently, neither Toronto nor New York saw enough return on their investment to justify keeping him.  Whether or not that was an issue perhaps exacerbated by his temperament is almost irrelevant once DC opted to make their move. United can’t afford to wait for him very long with another season close to halfway through and already on the brink of failure.

If De Rosario is incapable of melding with this team and recapturing a measure of his old form in the process, it will be the third in a single season.  Though the specifics of what led to his departure from Toronto and New York aren’t available for public consumption, the implications loom large.  A once great player in this League now known more for what he can’t do with a team than what he can do on the field.  For both DC and De Ro, this is an opportunity for that to change.