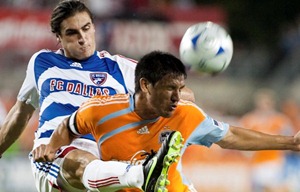 By Justin Shaffer – SEATTLE, WA (Feb 22, 2012) US Soccer Players — This past Christmas, my brother’s gift to me were two tickets to the Seattle Sounders “Opening Day."  Shortly into explaining how the Sounders would open their campaign against Santos Laguna in 2012 and how the schedule was setup with the Sounders in three different competitions (MLS, CONCACAF Champions League, and the US Open Cup), my frustrated brother interrupted me, “Why does soccer have to be so confusing?”

If you don't think that's a hurdle in attracting new fans, you're wrong.  The lack of simplicity in something as basic as the schedule isn't a benefit to mainstream fans, it's an annoyance at best and a disincentive at worst.  While MLS can’t really do anything about the confusing nature of the various competitions, removing or reducing the complexity of the things they do control would go a long ways towards making the League and the sport more accessible to fans.

Unfortunately, when creating the 2012 regular season schedule, MLS continued to move away from simplicity, opting for the unbalanced schedule. When MLS commissioner Don Garber announced the changes back in November, he suggested that a balanced schedule was just too much to handle with 19 teams and three different competitions.

"It’s simple math," Garber said in his State of the League press conference announcing the changes. "389 games would almost be impossible for us to execute with the other competitions we’re required to play, the weather issues we have … the challenges in a handful of markets, the FIFA dates," he said. "All the things we have to do differently in the United States from a competitive standpoint, just the travel impact that exists in our country."

While Garber is right about the amount of travel being unique issue for MLS, issues with the quality of play can be attributed more to MLS’s frugal salary structure and roster restrictions than calendar congestion. Four extra games a year per team is also a poor excuse to move to an unbalanced schedule, particularly when those games could be played in place of the playoff system.

There’s a sort of symbiotic relationship inherent in the structure of a league. Since the Commissioner brought it up, let’s stick with the English Premier League as an example. The EPL uses a system of relegation and promotion to provide some incentive for each team to continue playing to win (or at least not lose). As much as I like the relegation and promotion system it’s not a realistic option in North American soccer.

Instead, since it’s inception in 1996, MLS has used the playoffs as that motivation.  The League was designed for eight of ten teams to make the postseason. And, on the opposite end of the spectrum, MLS rewards failure by providing better draft picks to those teams at the bottom of the league.

Playoff systems make sense where it’s not possible for every team to play one another during the regular season, either due to the large number of teams (in the case of the World Cup, March Madness, etc.), separate leagues (Major League Baseball), or the intense physical nature of the sport (National Football League). MLS does not share any of these issues. Using a playoff system to determine a champion only serves to diminish the importance of the regular season and, worse, often means a lesser team is crowned champion.

In 2010, the Colorado Rapids finished 7th out of 16 teams in the regular season table but went onto win the MLS Cup. The 2009 MLS Cup winners, Real Salt Lake, finished in a three way tie for 8th place and only qualified for the playoffs on goal differential. However, in both cases, the League’s structure dictated that those four games mattered more than the 30 games played throughout the regular season by each team.  In fact, in the sixteen years of MLS play, only 6 times has the best teams actually been crowned MLS champion.

During his 2011 State of the League, Garber highlighted rivalries as one of the benefits for an unbalanced schedule.  He stressed their importance for drawing general interest and increasing the TV ratings. Rivalries, we believe, will help be the fuel to drive that energy and it's a big part of our strategy, so I think people will see in a week, when we lay all this out, that rivalry focus will be a big part of the format," Garber said."

Unfortunately, that wasn't what happened once the actual schedule was released.  Despite highlighting the rivalries as a benefit, the League’s schedulers did a poor job of actually applying that logic to the schedule. The Texas Derby between Dallas and Houston goes from two games a year to a single game. Dallas’s  place in the Western Conference also means that their Brimstone Cup rivalry with Chicago is reduced to a single game each year. North of the border, Vancouver gets only one game against each of its Canadian rivals, Montreal and Toronto.

The Atlantic Cup (NYRB vs DCU), California Clasico (LA vs San Jose), Heritage Cup (Sounders vs San Jose), SuperClasico (Chivas USA vs LA), Pioneer Cup (Columbus vs Dallas), Rocky Mountain Cup (RSL vs Colorado), and the Trillium Cup (Columbus vs Toronto) all have three games each resulting, however, in a distinct home-field advantage for one club due to the odd number of games.

And in the one rivalry where MLS could’ve restored some order of balance, they failed again. The Cascadia Cup features three teams from the Western Conference, which means 3 games between each team. Instead of scheduling each team to get three home games and three away games, this year Portland gets both Vancouver and Seattle at home twice, while Vancouver gets Seattle at home once, and the Sounders get on each team at home once.

MLS has a habit of crowning every game as the next big moment, yet they continue to undercut the importance of following the League game-by-game while frustrating their existing fans.  Instead of setting itself apart in the American sports landscape by creating a unique brand of simplicity, transparency, and accessibility, this League opts for complications.

Justin Shaffer joins USSoccerPlayers after regularly contributing to the site's comments section.  Look for his byline every other week.

This time the rumor is FIFA potentially sanctioning a European Premier League in competition with UEFA’s Champions League, but it’s a familiar story.