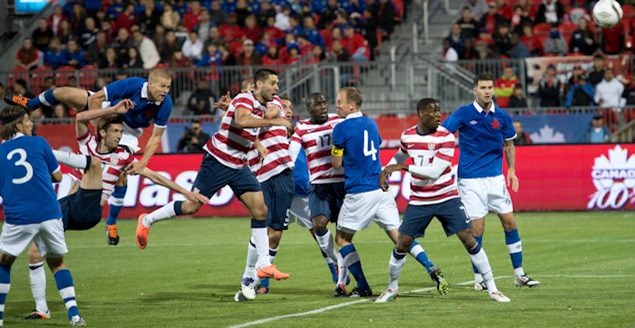 By J Hutcherson – WASHINGTON, DC (Oct 17, 2012) US Soccer Players – Trust me, I checked and the site still reads "US Soccer Players. Still, what's happening with Canada impacts all of CONCACAF. This is a Confederation in need of strong teams, and Canada can’t get it right frequently enough to matter. Yes, we all remember that they showed well against the United States in a Gold Cup but a blip doesn’t make a reputation. Playing in World Cups is the only metric to really judge a national team, and Canada hasn’t been to the show since 1986.

What was once progression turned into malaise. That’s after the expansion of Major League Soccer into the country and multiple attempts to reestablish the National Team program. The intent is there, but the results don’t fall. The total collapse against Honduras in the latest game that counts is a disaster. There’s no need to play with terms. Canada expects better, and Tuesday is a botched opportunity. Now, it’s back to trying to use the Gold Cup as a platform. The value of that competition in a World Cup Qualifying year is questionable. It’s a closed set, with no entry into the Confederations Cup.

Canada is between cycles. That’s the weight of failure at the semifinal stage of qualifying. Canada’s competitive schedule is clear, and that’s the worst thing that can happen to a team.

It’s that team aspect that the 2014 qualifying cycle calls into question. In a few days, they went from being gifted points against a Cuba squad missing multiple players to a thrashing from a good team but certainly not a great one. Again, we can argue choice of words but it has to be stressed how wrong it’s gone for Canada.

For CONCACAF, this is a major problem. Though the leadership focus might be on Central America, there’s an opportunity to build quality in the North American zone. Canada as a contender creates a regional battle for the Gold Cup and qualifying. That was the promise of June 21st, 2007 when it was Canada playing the United States tougher than Mexico would in the Gold Cup final. It was supposed to be a start, pushing the program along with the revived intensity of having topflight soccer.

The ideas to make professional soccer stick in Canada make the US experience seem reasonable by comparison. Tied to the United States during the original North American Soccer League era, Canada’s topflight teams consisted of clubs in the US second division. Development suffered, and the responses ran the gamut from a league of European reserve teams playing in Canada to looking across the border for topflight soccer.

MLS Canada should be on the mind of every Canadian soccer fan. Though the comparisons to that older league are normally not welcome by the push forward in the MLS era, the NASL offered what they thought was a solution to both teams in the early 80’s. The NASL fix was national teams as club sides, with Team America and the Montreal Manic’s Canadian-only policy. Both failed miserably, but Canada managed to qualify for the ’86 Cup. Advantage Canada, and it lasted for all of a cycle.

In 2012, these are programs and teams with little in common. Well, except for that shared interest in Major League Soccer. The MLS push to 20 clubs includes Toronto, Vancouver, and Montreal. It also brings with it the concept that part of the League’s role is domestic player development. This is country specific, with MLs somehow meeting its original obligation to develop talent for the US squad as well as the added problem of figuring out how that should work in Canada. The results aren’t there, again choosing words to reflect what happens when a team is demolished in World Cup Qualifying.

Where this leaves Canada is at least somewhat MLS dependent. Major League Soccer’s Canadian clubs are supposed to be the difference maker in a country without a lot of channels. There’s no established major college soccer. The main youth development systems are USA-specific. Even MLS’s academy system has more to do with a few US-based clubs than it does the Canadian contingent. All of those are steps that don’t require yet another revamp of the Canadian Soccer Association or the National Team program.

Unfortunately, the focus will likely be on the CSA and the national team coaching staff rather than focusing on development. ‘What went wrong’ should be asked again and again, but not as a problem with an internal solution. This was never a squad that would threaten the confederation’s elite for a spot in the World Cup. They were at best the half team in the 3.5 World Cup places. Even that was probably a stretch. The answer is development, and the focus should be on Canada’s topflight.