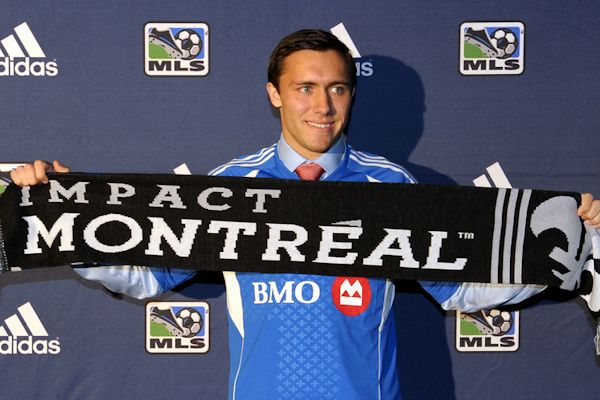 By J Hutcherson – WASHINGTON, DC (Jan 8, 2013) US Soccer Players – When you believe you can take a few things for granted about your favorite domestic soccer league, one club deciding to opt for a different way can seem a bit jarring. The response to Montreal Impact president Joey Saputo’s tweets outlining his vision for his club wasn’t exactly accepting. Instead, many Major League Soccer fans wondered why it’s ok for an MLS owner to talk about less of an American presence in a primarily American league.

“I said that being in a city with a European influence, our fans want to see players other than Americans.”

“I also did say that because we are limited in the amount of foreigners, we have to work within a system that integrates the two.”

Anyone who follows MLS knows it’s rarely that simple. Saputo’s coaching and player personnel moves speak to a tweak on a different vision for what it means to be an MLS club. Like the New York Red Bulls, it’s a model that borrows heavily from Europe. Unlike the Red Bulls, Saputo’s team plays in perhaps the most European city in North America. Barring an expansion to Quebec City, that’s not likely to change. Faced with that very specific circumstance, the Impact ownership’s response makes some sense.

Though the same criticism applies to the biggest professional sport in North America, MLS suffers from too many lookalike teams. The tactics end up interchangeable, leading to a familiarity that drags down the quality of games. It’s professional sports as risk management, with few front offices and coaches willing to take the kind of risks that might turn their club into something special. After all, they’ve seen what’s happened with New York, Toronto, and Chivas USA.

All three of those teams started versions of a conversation for difference in MLS, and all three have yet to turn that into success stories. That weighs on other clubs who might consider adjusting their own situations. Why wouldn’t it? Those three examples are enough to convince anyone to stick with what works well enough in this League to have a shot at success. Attempting a redesign that could destabilize your club is a bold move that most teams and ownerships aren’t willing to take.

Montreal’s situation is different, almost categorically. You can’t put enough stress on their particular environment, their fan base, and their expectations. It’s not Chivas USA revisited when a team calls for a specific identity that may not mesh with MLS as a developmental league for the US National Team. That role had already changed before the League expanded into Canada and had to make the distinction between domestic and foreign players for teams in a second country.

Adding to Montreal’s choices is their newness. They weren’t around for the lessening of single-entity rules, the designated player, and the other moves that turned MLS into a different league than the one that launched in the mid-1990’s. It’s tougher for established clubs to redefine themselves. We’ve seen re-brandings and re-launches with varying success, but it’s not as if the League’s fans suddenly forgot that these teams existed under other names and other operating ideals. That’s not the same issue for Montreal, especially since they had a clean break between their minor league era and moving the club to MLS. They can do the same between an uneventful expansion year and year two as well.

What’s at stake in the wider conversation is the purpose of MLS clubs on both sides of the border. For a League that’s moved away from a single-entity identity as well as domestic player development, Montreal’s open discussion of what their club should be in isolation is interesting. Right now, that’s where we are. Once again, a club is trying to take a different look at Major League Soccer.

I would like to join with former US Soccer Players columnist Andrew Dixon in paying tribute to the work of Roland Rogers, who passed away earlier this month. Rogers founded the Black Athlete Sports Network, a website where I first read Andrew’s columns. There’s no greater compliment that I can think of than saying of someone that they put others first. From what Andrew describes in his tribute to Mr. Rogers, there’s no doubt that he was a person who got that right. Though I never met him, we had Andrew in common. Mr. Rogers made it easy for me to see a unique talent, occupying what I believe to be a critical spot in American soccer discourse. It takes an equally unique talent to develop that kind of writer. Though Andrew pays me a compliment in his tribute, the real compliment goes to his first, and to my mind best, editor Roland Rogers.