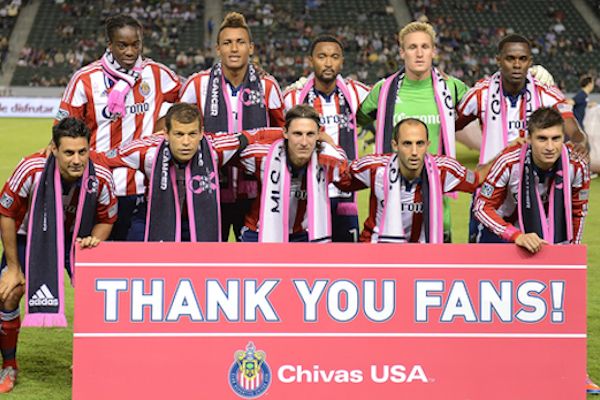 By Jason Davis – WASHINGTON, DC (Jan 16, 2013) US Soccer Players – José Luis Sanchéz Solá, the man known as “Chelis” and the new head coach of perennial basket case Major League Soccer club Chivas USA, can be forgiven for not having the best grasp on the machinations that go into the MLS SuperDraft. He’s new to this after all, suffering from the usual unfamiliarity with the MLS process that afflicts most foreign coaches. He’s learning on the fly, and no one seems to have told him that it’s best to keep your SuperDraft cards close to the vest.

When he brazenly declared his first choice for Chivas’s number two overall pick on Thursday to be UConn senior Carlos Alvarez, Chelis broke a cardinal rule of the draft process. Even if Chivas is certain of their pick, it’s not customary to tell the world who you plan to choose. Doing so eliminates almost any chance of leveraging draft position into a trade for additional picks, a common move at any draft. By stating flatly who Chivas USA wanted, Chelis turned Thursday into a forgone conclusion for his team.

That seems fine with Carlos Alvarez, the player coveted by Chelis. Alvarez told SoccerbyIves’s Ives Galarcep on unequivocally Sunday “I want to go to Chivas.” The club, despite its struggles in recent years, is the young Angelino’s preferred destination. That’s as much about the club’s connection to its Mexican sister club than anything Chivas USA has done in MLS, but it speaks directly to the renewed push to focus on Mexican-American talent. In a small way, Chivas USA’s proclamations are validated by Alvarez’s preference. Another young Mexican-American player in the pool, North Carolina’s highly rated Mikey Lopez, echoed Alvarez’s statements.

So, in yet another rebuilding offseason for Chivas USA, the two most prominent players of Mexican descent year’s draft class appear to be embracing the club. This is at least an early indication that Chelis’ could have some substance to go with the rhetoric. Considering the state of the MLS draft (valuable, but hardly crucial to a team’s success) and the long-term direction of MLS player development, what Chivas USA loses in draft leverage through Chelis’s words is ultimately of little import. If the club is going to follow through on its promises, missing out on a pick or two in a draft that features few players who fit their criteria hardly matters.

In Chelis, for all of his lack of SuperDraft nous, Chivas USA has the perfect man to lead the charge into a new era of Mexican-American focus. His credentials as a Mexican futbol mind are solid, his ability to project the necessary image obvious. When Chelis speaks about returning Chivas USA to its roots as an American club modeled on its Mexican sister, players like Carlos Alvarez and Mikey Lopez listen. Maybe that’s because they see the Los Angeles franchise as a stepping stone to the Guadalajara club, but that’s less important to the success of the project than the simple fact that players like them actively want to play for a perennial MLS also-ran. While their peers would prefer to land with the Galaxy, Sounders, Real Salt Lake, or any number of teams with better recent records and a more obvious chance at a championship, Alvarez and Lopez are enthusiastic about the ambitious project at Chivas USA.

None of this leads directly to any kind of success on the field, of course. There’s reason to doubt that the doctrine espoused by Chelis can work in MLS, a League that typically punishes teams that range too far from the norm. How can an MLS club eliminate such a large portion of the player pool and hope to be competitive on the field? Until we see his team in action, and they prove it doesn’t just mean making themselves attractive to a group of young Mexican-American players, the revolution at Chivas USA is nothing more than a news making curiosity.

As expected, in the aftermath of Chelis’s statements Chivas USA issued a denial that the club’s draft choice was already a foregone conclusion. That appears to have been damage control, a scramble to regain some of that leverage lost when the new head coach showed his hand. Alvarez’s status as one of the top talents in the draft isn’t consensus, and there are moves Chivas USA could make that would allow them to both draft Alvarez and pick up compensation from their rivals. If everyone knows that Chivas USA will pick Alvarez, all of that is out of the window.

Thus, we have the new Chivas USA: half ardent attempt to remake the club in the image of Chivas Guadalajara (with an American bent), half bumbling MLS naïf. That potent combination makes Chivas USA something it hasn’t been in a very long time: newsworthy, interesting, and worthy of attention. Mistake or not, Chelis’s statements about Carlos Alvarez, and the declaration of intent it represents, makes real all of the talk we’ve heard out of LA since the Mexican coach took charge amid a new focus on Mexican and Mexican-American talent. There are young players on board, anxious to play for the Goats, and the American soccer world has raised a curious eyebrow in their direction.

Chelis has yet to coach a game in MLS, and we’ve yet to see the new look Chivas USA take the field. Yet, they’ve become captivating in a way they never were before.