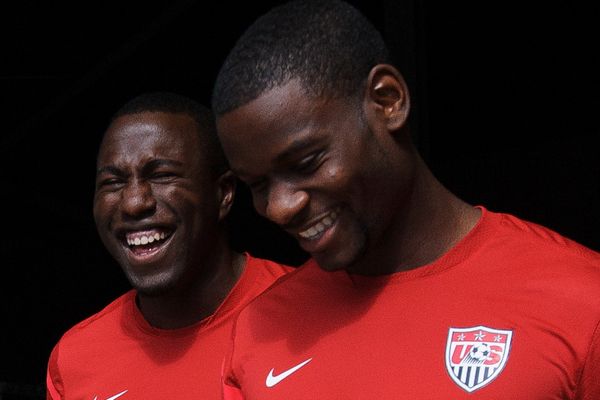 By Jason Davis – WASHINGTON, DC (Jan 24, 2013) US Soccer Players – Americans have trekked to nearly every corner of the globe in search of paying jobs as professional soccer players. They’ve gone to Russia, New Zealand, Norway, Romania, Peru, Mexico, Israel, Bosnia & Herzegovina, England, Germany, Portugal, Spain and many, many more. Anywhere that there’s a professional league of some repute that opens its doors, you’re bound to find an American—or, at the very least, a history that includes an American name or two. Sometimes, players land in far-flung leagues because they have family ties to the country in question. Often, it’s just a case of circumstance, that a team there showed interest and the player was willing to take on the adventure.

Such is the case of Maurice Edu, now on loan at Turkish giant Bursaspor from English Premier League side Stoke City. Edu is not the first American to find himself playing in the soccer hotbed of Turkey – he’s not even the first to play for Bursaspor – but the list he joins isn’t long. Before Edu decided to take his talents to Bursa, a handful of his compatriots played there, often very briefly, and almost always as stepping stones to later stops where they would make their most remembered mark.

Goalkeeper Brad Friedel was the first American to land in Turkey. After several attempts to obtain a UK work permit ended in denial, Friedel joined Turkey’s most storied club, Galatasaray, in 1995. He spent just one season there, playing sporadically as a backup before moving to the newly formed Columbus Crew in 1996. Friedel’s time in Turkey came before the during the first wave of American internationals in Europe, well before he established himself as one of the best players the United States has ever produced. Friedel has talked many times about how much he enjoyed his experience at Galatasaray. The fanaticism of the fans is something special.

It would be 15 years before another American would venture to Turkey.

The reopening, as it were, of the Turkish soccer frontier came in 2011 when two young Americans of prodigious talent but frustrating recent club situations landed there on loan. Jozy Altidore joined Bursaspor on loan from Villareal, his third temporary stint away from Spain in as many years. Six months in Turkey served the striker well enough that he moved on to his current club, AZ Alkmaar in the Eredivisie, where his career has flourished. Altidore made 12 appearances for Bursaspor before leaving for Holland.

Freddy Adu also spent some of his 2011 in Turkey, playing for second division side Rizaspor. The stop was one of four loans he made while contracted to Benfica, the club that purchased him from MLS in 2007. Adu made eleven appearances for the small Turkish club and scored four goals before returning to MLS with the Philadelphia Union in 2011. While the stint was relatively successful, Adu, like Altidore, wasn’t in Turkey long enough to make a meaningful impact. The stop is just one of many he made abroad before returning to Major League Soccer, making it easily forgettable.

Turkey has a competitive league with rich clubs and entree into the biggest European competitions. The soccer culture is intense and passionate. There is a litany of reasons why players should be open to playing there. Yet the number of Americans with Turkish clubs on their resumes is disproportionate to the relative profile of the Super Lig. Only Serie A has a lesser history with Americans than Turkey among leagues of note, and Italy’s better quality likely plays a large role in that circumstance.

“Why don’t more Americans play in Turkey?” is not an easy question to answer. Perhaps it’s cultural, though Americans have adjusted to locales as strange or stranger than any in Turkey. Maybe Turkish clubs simply don’t express a general interest in American players, a very real possibility that could be less about the American player’s ability than a lack of initiative on either side. It is, after all, a two-way street.

Perhaps the fanaticism of the fans, something that Friedel remembers fondly, is intimidating for many Americans. Whatever the reasons, Turkey has remained an untapped option for American players throughout the modern age American soccer. Aside from Friedel, those that have played there (or are currently playing there in the case of Edu) made the move to Turkey on loan and out of a necessity for regular playing time.

It’s certainly no secret that Americans typically aspire to leagues of greater prominence than the Super Lig. That puts Turkey squarely in a group of countries that is usually only attractive to Americans as a stepping-stone. Hence, loan moves and signings of opportunity.

Maurice Edu is even now settling into his role at Bursaspor. It’s impossible to know how his experience will go, though the early returns are positive. Will Edu’s time in Turkey help promote the league as a viable place for Americans to play? After a gap of 15 years between Americans in Turkey, three have now played there in the short span of a few years. Wesley Sneijder’s move from Inter Milan to Galatasaray is exactly the type of marquee transfer that could inspire a wave of talent to consider Turkey as a worthwhile place to play.