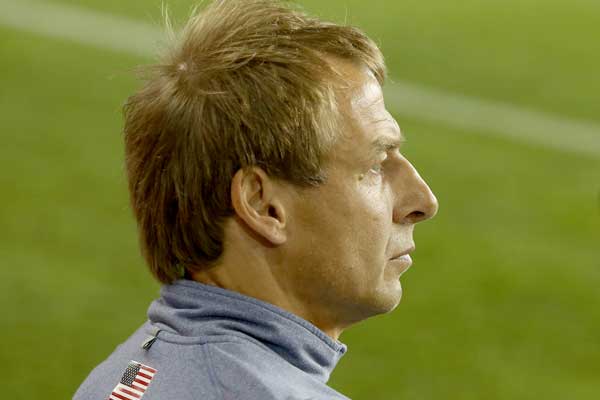 By Jason Davis – WASHINGTON, DC (Jan 31, 2013) US Soccer Players – After a tough to watch friendly between the United States and Canada on Tuesday night in Houston, the quick takeaway after an arduous 90 minutes was that maybe the United States and Canada shouldn’t play each other anymore. They should certainly take a break, at least. Nothing good happens when the two get together, and by nothing good, I of course mean goals.

It went further than that though. Perhaps because of National Team coach Jurgen Klinsmann’s strange compulsion to start players out of position or because Canada entered a meaningless friendly with a young team bent on constricting the space in midfield and smothering the American attack, nothing seriously approaching a goal happened. The Canadians threatened a time or two through DC United star Dwayne DeRosario, and the American offense picked up a bit of life when Benny Feilhaber entered the game. Still, for the most part, the two sides merely knocked the ball around without giving any indication that they meant to use it for its intended purpose.

Klinsmann said afterwards that he was pleased with the progress made by his team over the last three weeks. There was no evidence of that progress in the finished product on Tuesday night, though a handful of players managed to give something of a noteworthy performance. Josh Gatt in particular entered in the second half and provided an immediate spark, if only because he appeared to be the only player on the field willing to take a risk.

The whole episode was an exercise in conservatism, from the lineup Klinsmann put out to start to the way those players went about their task. The only thing more conservative than the US approach and play on Tuesday night was Canada’s plan to sit behind the ball, close down potential passing lanes in midfield with extra bodies, and hope to find their way into the American net via a counterattack or set piece.

The game was a classic example of the limbo in which the United States remains mired when it comes to dictating a game. Good enough that the lesser lights of CONCACAF (like Canada) will bunker and attempt to frustrate a more talented American team, but not yet adept enough at breaking down a crowded defense to make the opponent pay for the tactic.

Granted, a January friendly featuring second and third-choice players isn’t the best example, but we’ve seen this kind of thing before. Against a committed defense, there’s an inability to work in concert to open up space when the opponent’s sole good is to limit it. That looms large with the Hexagonal round of World Cup Qualifying starting next week.

So far, Klinsmann has yet to prove that he can get his team to play effectively when faced with an ultra-defensive opponent. Nor has he shown a desire to start players who might be suited to the task, which is difficult to understand. The latter is more worrisome, because the issue transcends individual player selection. No matter the makeup of his roster (A, B, other), Klinsmann has the potential to set out a team with one or more players occupying strange new sections of the field.

Tuesday’s game in Houston had an eerie similarity to the last time the two nations played, a dreary scoreless draw in Toronto in June of 2012. Two games make a pattern, and the pattern is not appealing. We’ll set aside not scheduling Canada anytime soon. Klinsmann’s apparent lack of tactical flexibility (or unwillingness to exercise any) doesn’t breed confidence ahead of a trip to San Pedro Sula, no matter the ability to call up his best and brightest from Europe.

It would be easy to conclude from Tuesday’s stalemate in Houston that the United States lacks depth in its talent pool. It would be easy to wonder if Klinsmann was being honest in his assessment of the MLS batch of players when he called it “deeper” than he expected. It would be natural to consider why it took more than a year and a half for Klinsmann to form that assessment, or if he spent too much time indoctrinating this particular group of players into his system of fitness first. The performance of the team he selected from that “surprisingly deep” MLS talent pool and then worked with for three weeks leading up to a meaningful friendly shouldn’t mean much, and yet it’s hard to put out of mind completely.

Luckily for Klinsmann, he’s unlikely to need too many of the players who couldn’t unlock Canada’s defense on Tuesday. Even if he did, the different makeup of the rest of the squad makes it difficult to know how they’d perform. The problem might not be certain individuals (the aforementioned depth), but the way that particular team worked, or didn’t work, together.

Never mind that they had three weeks of training under Jurgen Klinsmann’s direction. In Honduras, Klinsmann won’t have the chance to make multiple changes at halftime to try to fix a very obvious problem. Get it right from the start, or the trip could very well end up pointless.

The timing of a scoreless draw with Canada was unfortunate, because it dented confidence in Klinsmann just as the next, and most intense, round of qualifying begins. Everyone involved will want to shake it off. For the players, that shouldn’t be too difficult. Will it be the same for Jurgen Klinsmann?