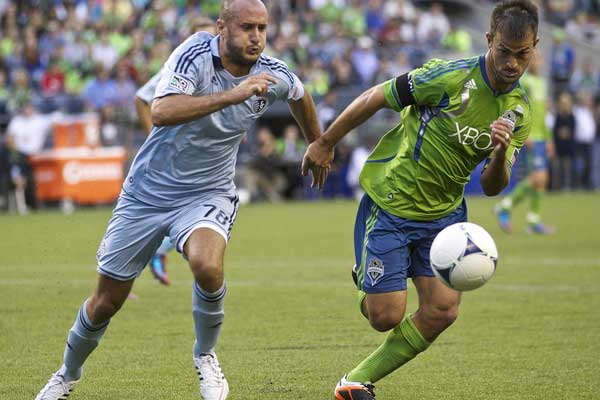 With Seattle losing Patrick Ianni for a while, what are Sigi Schmid’s options in central defense?

Schmid’s seen it all as a coach, so while Ianni’s start of training camp injury is unfortunate, Seattle will find a way to adjust. They might choose to go with Zach Scott until Ianni is back playing central defense (reports say he’s out for up to six weeks), which seems the most likely route; they also might do a Barcelona, as it were, and play a central/defensive midfielder in central defense and let Jhon Kennedy Hurtado do the heavy lifting.

The point being, Seattle has a month to get it figured out, and Ianni might be back before then. The uncomfortable parallel to last season’s Galaxy loss of Omar Gonzalez going into the regular season and the Champions League knockout rounds will no doubt be on Schmid’s mind.

Is Ramiro Corrales going to play, or coach, this season?

Both. According to Geoff Lepper’s article on mlssoccer.com, Corrales will re-sign with San Jose to play for the team and work with the club’s academy. What is in danger of being missed in the on-going celebration of the length of Corrales’s career is that he can still play at a high level in a variety of positions: fullback, wide midfield, central midfield, and perhaps even central defense. Corrales should’ve been the option to slot in next to Victor Bernardez in central defense when Jason Hernandez wasn’t available last season.

Have things changed at Toronto?

Two successive regimes couldn’t find a place for a guy who scored 10 goals and 9 assists (admittedly in 52 games) for teams that didn’t exactly light up the League? Apparently not, as Toronto gave up on Joao Plata for a second-round pick in the 2015 draft from Salt Lake.

Let’s give Salt Lake some credit and suggest that they won’t completely fall apart in 2013 and 2014. This suggests the draft pick Toronto acquired will be in the 30s, that is, the later stages of the second round. Is that value for money when Salt Lake gets a fast, young forward who should fit in well with an organized team that has expectations? I know, I’m supposed to be answering questions, not asking them. Still, has anything really changed with Toronto?

Which goalkeeper leads the US Men’s National Team in career shutouts?

How many players are on the Revolution’s training camp roster?

Thirty-four players, according to the pdf on the club’s official site. So, how many coaches? There’s Jay Heaps, an assistant, a goalkeeper coach, and a strength-and-conditioning coach. That’s it. Four.

Even if you concede New England probably has academy coaches and the like present to help out, how is a coach supposed to get his points across to 34 players? How is a non-roster player or one who was on the fringes of the squad last year supposed to get an opportunity?

As New England jettisoned its Reserve Team (excuse me, I mean signed a working agreement with Rochester to loan four of its players), those opportunities will apparently come in the USL, for fringe players. While we all agree MLS has a budget it needs to follow, improving quality of play and development are still part of the job. If you believe in a head coach, why not give him the resources to succeed?