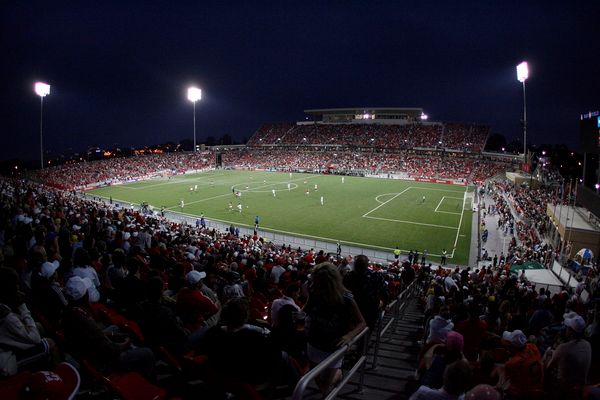 It was a whirlwind, but it doesn’t stop there. Now would be a good time to throw aside any assumptions regarding Nelsen’s status as an active player. Whatever they might be, they’re probably wrong.

After attending the news conference to announce his appointment at TFC, Nelsen heads back to London, where he will be available for selection by manager Harry Redknapp when QPR take on Clint Dempsey’s Tottenham in an English Premier League fixture. Yes, Ryan Nelsen is, as of Tuesday morning, both Toronto FC head coach and first choice Queens Park Rangers center back. Nelsen remains tied to QPR and their relegation scrap for the remainder of the 2012-13 Premier League season, unless Harry Redknapp allows him to leave sooner.

The unprecedented situation, the brainchild of new TFC president Kevin Payne, puts Toronto in the unenviable position of not knowing exactly when their head coach will be ready to start his new job. As far as anyone can tell, it’s a wholly new way to hire someone, fraught with head-scratching details that strain believability. It’s also completely of their own making.

Admittedly, this is only the latest act in a long running play that’s turned a once-promising club into a project. Performances haven’t met expectations, the supporters openly question the club’s direction, and attendance at BMO Field fell in 2012 as once again the club didn’t make the playoffs.

Now, under Payne, the clubs’ new president and general manager, Toronto faces a waiting game to fully transition to their latest coach. This is as perplexing as it is messy, lacking the stability that Toronto needs.

When Nelsen takes over becomes the question, alongside what the team does between then and now. Also announced on Tuesday was a new assistant, Fran O’Leary, who has no professional coaching experience and only earned his UEFA coaching license this week. O’Leary’s experience is at the collegiate level, and that transition normally takes time.

Is it worth the risk for Nelsen, a player with a reputation as a coach in waiting? There’s no questioning Nelsen’s credentials. From his time as an All-American at Stanford through to his latest English stop at Queens Park Rangers, Nelsen’s qualities as a consummate pro and leader made him an obvious candidate to turn to coaching when his career was over. During his introduction in Toronto on Tuesday morning, Kevin Payne went to great lengths to frame Nelsen as a player with clear and directed interest in coaching, even in his early years with DC. Payne told the gathered Toronto press of how, at age 21, Nelsen’s volunteered as a coach at George Mason University in northern Virginia just to learn. Fran O’Leary was the head coach.

Rumors of Nelsen moving back to MLS, perhaps as a player/assistant at his old club, made sense. Even Nelsen taking over as the head coach at a place like Toronto FC wasn’t out of bounds, because the League had examples of young, recently retired players succeeding like Jason Kreis and Ben Olsen.

Still, to have Nelsen sign on with Toronto FC while his immediate future is still contractually obligated to QPR, leaving him in no position to lay a foundation for the new season and the club with a vacuum to fill in his absence, means his new career starts without him. He can’t help but be sidelined over personnel decisions. He’ll have no time to earn the respect of his charges before finally arriving in the middle of their campaign. If the season starts poorly, which would hardly be a surprise in Toronto, Nelsen will enter a scene already suffering in morale and form possessing none of the experience needed to know how to turn things around.

A young head coach needs every advantage he can get in order to make the transition. Nelsen will have almost none.

What he will have is Kevin Payne backing him up. The most obvious subtext to Tuesday’s proceedings was Payne’s consolidation of power at the top of TFC food chain. Nelsen is most decidedly Payne’s hire, a handpicked appointment with whom Payne is intimately familiar. Unwilling to wait out Nelsen’s contract, and desperate to move on from last season, Payne made the move for Nelsen despite the unprecedented situation. There’s no doubt Payne knew what he was doing and chose to go ahead with the move.

For all the complications and potential problems, Payne has done Nelsen at least one favor. If it all goes wrong, Nelsen gets a pass. At worst, he’s a young exuberant coach who took an ill-advised opportunity at the behest of an old mentor. For better or worse, there will be other opportunities. Few would blame him for taking the chance. The blame will fall squarely on Payne.

If it all goes wrong. Maybe, it won’t.