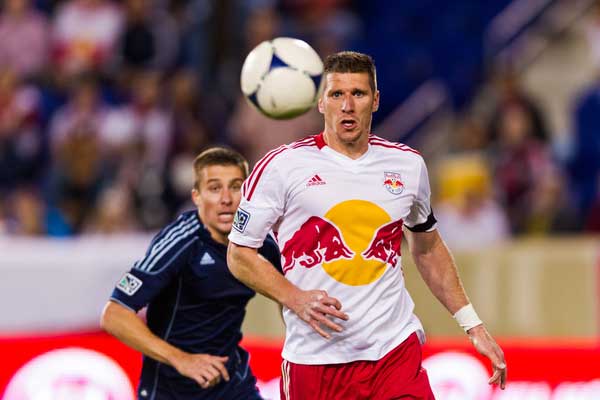 By Jason Davis – WASHINGTON, DC (Feb 7, 2013) US Soccer Players – It’s wheeling and dealing time in Major League Soccer. Everything is on the table as clubs work to firm up their rosters ahead of First Kick, just a little over three weeks away. With rights, draft picks, international slots, and allocation money all trading hands the goal is simple in theory. Making the playoffs remains the primary goal in this League, the difference between good and bad.

Value is fluid. Need drives the market, but not necessarily the need to add talent. Sometimes “need” has more to do with ridding yourself of perceived disruption more than getting anything of equal value in return.

Such is the case with the three biggest MLS trades to go down this week. Toronto FC striker Eric Hassli moved to FC Dallas for a draft pick. Kenny Cooper returns to FC Dallas from the New York Red Bulls in return for a helping of allocation money. Chicago Fire speedster Dominic Oduro joins the Crew for midfielder Dilly Duka plus the MLS rights to England-based winger Robbie Rogers. Each one should have fans asking why. All three illustrate the strange nature of the MLS player transfer system. Let’s start with Cooper.

The Red Bulls traded their leading scorer from 2012 back to his original team for an undisclosed amount of allocation money. Here, MLS replicates its fellow American sports leagues by making paramount the need for teams to massage their payrolls. In other words, in an MLS without restriction, Kenny Cooper is still a Red Bull. Instead, because New York needs the cap relief and has plans to sign other players to improve their team (they’ve already traded for RSL striker Fabian Espindola), Cooper became expendable. The wisdom of the move waits until the season plays out, but trading the league’s second leading goal-scorer is never the easiest or best option. It’s even hard to know if New York made out okay in the deal without disclosure of the fee. Will they soon regret shipping a successful player on the off-chance one or more of his replacements can fill the goal-scoring void?

In the meantime, the Red Bulls used some of their newly created cap room to sign midfielder Dax McCarty to a well-deserved contract extension. Maybe securing their best midfielder was worth losing their leading goal-scorer.

For Columbus, the Crew snagged Oduro from Chicago for Dilly Duka, a promising young player at odds with head coach Robert Warzycha, and the rights to Robbie Rogers. Rogers is currently unattached but shows no signs of returning to MLS in the near future. He was unaware that his MLS rights now belong to Chicago until he read it on the internet. The Fire’s return on a player who scored 18 goals for them over the past two season is a promising midfielder with 45 career games to his name and control of a player who is unavailable.

The trade is less obviously lopsided than FC Dallas’s trade with New York for Cooper, but not much more than that. One can’t help but wonder if it was the rights to Rogers that put it over the top, despite the uncertainty as to when he might return (if he returns) to MLS. Everything is on the block in this League, even future considerations for a player currently on the other side of the ocean.

Then there’s TFC’s outright dumping of Designated Player Eric Hassli. It would be wrong to call it anything but, even if Toronto would like to offer a more flattering account. Hassli’s salary was high, he publicly expressed a desire to leave, and we got the expected response from the club. What this turned into was a deal for Dallas, giving up a draft pick that’s dependent on Hassli’s performance. From the outside, it looks like a fire sale, even if reports that TFC is not picking up a significant portion of Hassli’s salary are true. Dallas took advantage of the discord and bought low on a player who should help them replace the offensive production of recently sold Brek Shea and did it without using a Designated Player slot.

Judge the fairness of these trades before the players involved take the field with their new teams at your own risk. Right now, we simply don’t know how players, tactics, and opportunity will mix over an MLS summer. Even with their one-sided appearance, the teams that look to be on the worst end of them made the trades willingly, and for reasons they deem important. New York, with less punch up front. The Fire, slower and less threatening than before. Toronto FC, now with just one MLS-savvy forward on their roster and with a messy exit. None of it makes much sense, but everything is on the table. Even if the team sitting on the other side isn’t offering really offering much at all.

In Major League Soccer, “nothing at all” can sometimes be more than enough.