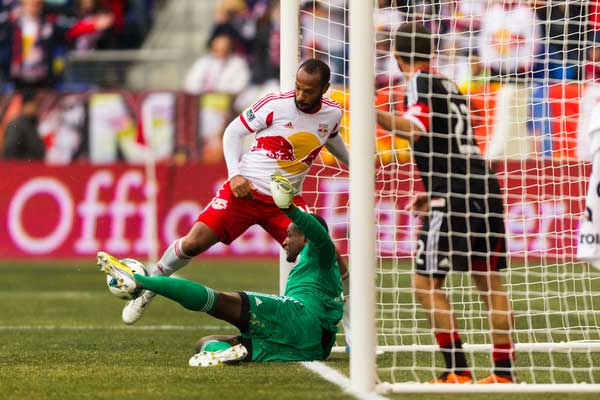 By Clemente Lisi – Harrison, NJ (March 18, 2013) US Soccer Players – Rivalries define soccer. Without them, there would be less passion, less excitement and less hype. As Major League Soccer and NBC touted this week’s round of games as “Rivalry Week,” there was no bigger rivalry on display than New York versus DC United. The Atlantic Cup showdown is arguably the League’s best and biggest rivalry. After what happened Saturday afternoon, the rivalry between them has gotten even more intense.

With his team locked in a scoreless tie against DC United at Red Bull Arena, New York Red Bulls coach Mike Petke tried to stay calm on the sidelines. He paced. He fidgeted. He even barked orders at his players.

“Push forward,” he shouted at one point midway through the second half. “Come on!”

Whenever DC United got the ball and played it on the left flank to Dwayne DeRosario, Petke stood up and reversed himself, waving his arms and yelling: “Get back! Get back!”

Around him, 22,022 fans braved the 37-degree temperatures and falling snow, chanting incessantly for 90 minutes. After all, there is nothing like a good, old-fashioned rivalry to get the juices flowing for the fans, players and coaches.

The game ended 0-0, although the Red Bulls were the ones to create most of the chances. Not only did New York come closest to scoring (in the 24th minute and again in the 56th when both Fabian Espindola attempts slammed against the crossbar), but the Red Bulls could have won the game at the end.

In a moment that screamed goal-line technology (and with MLS Commissioner Don Garber in attendance), Brandon Barklage’s stoppage-time attempt appeared to be a goal, but United goalkeeper Bill Hamid used a hand to swat the ball away. Replays were inconclusive. The debate will rage on.

A fed-up Petke stood motionless on the sidelines as the players on the bench around him jumped up and down in disbelief.

“Let me tell you, it sucks to sit back and watch it unfold. You just say, ‘What the hell do you have to do to get the ball into the net?’” he told reporters after the game.

Hamid, who had a great afternoon, said the ball never went in.

“I got there before it went over the line,” he said.

Saturday’s game – the first of three games between the teams during the regular season — marked the first meeting between the sides since last year’s tense playoff series, which was twice delayed (by Hurricane Sandy and subsequently by a snowstorm) before United ultimately prevailed.

Historically, these two teams have had little love for one another. Given the geographic proximity of the teams, New York and DC have been natural rivals since the league’s inaugural season in 1996. It is essentially the oldest rivalry in MLS, although the series has been lopsided. Entering the game, DC United held an overall edge of 31-20-8 all-time, including a 6-1-2 record in the playoffs.

Petke, who once played for New York and DC, said both teams have “built up the hatred” over the years.

“It has continued all this time, so for me this game and what it means never changed,” he said. “Even the players today, no matter where the teams are in the standings, have learned to be a part of this. It just lives on.”

For the Red Bulls, 2013 is the chance to once again hit the reset button – but memories never die. New York fans even unfurled a banner to set the tone – emphatically stating “Revenge is Here!” – before the opening whistle. Not to be outdone, a few hundred United fans made the trip north, sitting in a section tucked way up in the upper deck. The contingent also made its voices heard throughout the game.

Both sides had something to cheer about. For the Red Bulls, it marked the first time its overhauled roster played before a home crowd. For United, DeRosario was making his season debut, a much-needed offensive weapon if Ben Olsen’s team wants to go even further than last year’s Eastern Conference final.

In the league’s early years, the then-MetroStars played at Giants Stadium. The league considered the team its flagship franchise and expected it to recreate the days of the New York Cosmos. That never happened. Instead, it was DC United – under coach Bruce Arena — that emerged as the best team, winning the first MLS Cup and building on that a dynasty that lasted for much of the late 1990s. The MetroStars (and later Red Bulls) never lived up to its potential.

The Red Bulls hope that after 18 years of futility and an empty trophy case will culminate with a title in 2013. Thierry Henry, as usual, exuded the most passion on his team. He grimaced and gestured all game long each time his teammates misplayed a ball or turned it over. Henry even shook his head each time he made a mistake or shot the ball off target. For Henry, it has been a frustrating few years in New York.

He remains frustrated. Henry left Red Bull Arena without talking with reporters after yet another disappointment for New York. It was also another chapter in a rivalry between two teams that saw DC United get the better of New York once again.