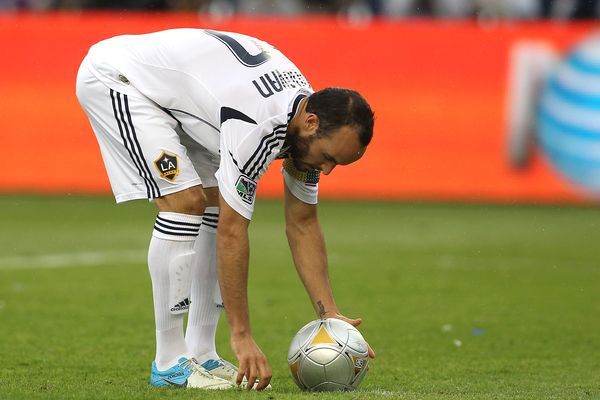 By Charles Boehm – WASHINGTON, DC (Mar 28, 2012) US Soccer Players – It’s been quite a month for the US National Team, with memorable World Cup qualifying results against Costa Rica and Mexico after the mini-controversy of the Sporting News story detailing the confusion and consternation in some quarters of the squad over the past few months. Keeping in mind last month’s rough start to the CONCACAF Hexagonal round in Honduras, it’s been a time of meeting and overcoming adversity with a renewed focus on spirit, unity and combativeness.

Landon Donovan, the man many would call the best US player of the past decade at the very least, has not been a part of it.

That alone makes him a target for scorn in the eyes of some fans and observers, given that his absence from both club and national team has come through his own personal choice of a personal hiatus, rather than forced by injury or loss of form.

I had the opportunity to attend both of Donovan’s public appearances in the nation’s capital this week as he rejoined the LA Galaxy and returned to the spotlight for the first time in four months. There was a smile on his face as President Barack Obama welcomed the Galaxy to the White House on Tuesday, and a spring in his step at LA’s training on Thursday morning. When club officials finally made him available to the media, he admitted that watching his teams in action without him was the final trigger in restoring the hunger and love that had gone missing more than a decade of nearly non-stop play.

“I definitely needed a break, and was fortunate to have a lot of people both personally and professionally that understood that,” he said on Thursday. “And now I’m excited to be back and to move forward and enjoy playing. I wanted to get the enjoyment back. And I watched our first game against Chicago, the Galaxy game, at home and really had that itch again to play, and I knew that I was ready.”

For many of the fans who work long hours in cubicles, on sales floors or on our feet in pursuit of the wages that bring us our daily bread, Donovan’s need for a sabbatical from the game we love is bewildering and disappointing, an abdication of the dream job that others would kill for. A betrayal, even, of club and country, and the gifts that make him such a rare and successful talent.

Yet there’s ample reason to look at Donovan’s choice in the same light as one would a concussion or a torn ligament. The thousand-yard stare that reporters saw float over their heads as he answered their questions at MLS Cup 2013 was a sign, just the way a player’s limp or grimace hints at the body’s pain and loss of capacity. Donovan simply does not possess the typical athlete’s psyche, and it’s turned out to be one of the defining features of his career, nearly as influential as his speed, skill and chart-topping game IQ.

Think of the curiosity and intelligence that prompted him to learn Spanish as he played with Latino friends growing up in Southern California. Or the stunning bravery that allowed him to step up and stand out in the 2002 World Cup before he’d celebrated his 21st birthday.

The flipside of this coin is the introspection and sensitivity that leads him to think, feel and act so differently from others in his profession. He’s arguably the most intuitive American player of his generation, and it’s taken him on a different path from the rest.

His remarks to a room full of schoolchildren during a “Let’s Move!” health and fitness Q&A at the White House underlined the reality that his fly’s-eye vision doesn’t switch off when he leaves the field. He’s aware of his blessings, yet lately seems to have discovered a desire for something more.

“Growing up, when I would go outside, I met people from all parts of the world, with all different backgrounds, all different abilities and sometimes disabilities,” said Donovan. “And you realize when you play, you learn something – that we’re all the same, and we’re all people in that way. So if you’re sitting in front of your phone or your computer all day, those opportunities don’t come to you. But if you go outside and play, you can see there’s a lot more to life and a lot more to the world.”

The coaches who’ve recognized and respected his uniqueness most readily are also those who’ve coaxed the greatest achievements out of him. On Thursday Donovan admitted that neither Jurgen Klinsmann nor Galaxy coach Bruce Arena were happy with his hiatus. After a decade together, Arena understands his midfielder and will surely plug him back into the lineup as soon as Donovan’s body allows it.

“To be honest, it was really seamless,” said Donovan, who has not been collecting a salary during his break, of his return to the Galaxy squad. “I’ve known a lot of these guys for a long time and I think they understood how badly I needed some time away. So there wasn’t a big deal made. We all kind of just fall back into our friendships and our camaraderie, and I’m fortunate to play for a team like this. There’s probably a lot of other teams that wouldn’t have been as accepting.”

The next question, of course, is whether Klinsmann will do the same.

“This week was pretty difficult, watching the US in those games when you want to be a part of it,” said Donovan when I asked him for his reaction to the USA’s courageous 0-0 road draw with Mexico on Tuesday. “I realize I have a long way to go both on the field and off the field to work my way back into the national team, and that’s my goal. I miss being a part of that and I want to represent my country again.”