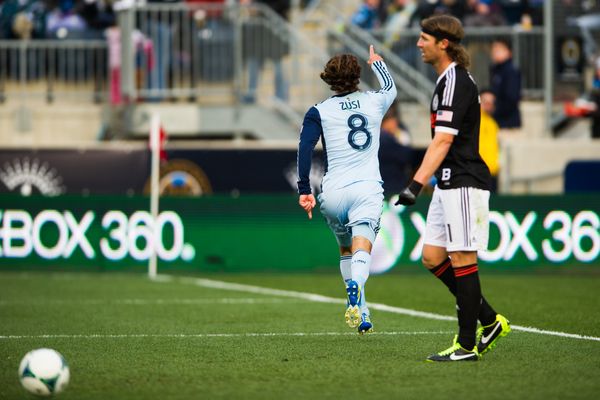 In the first game on the 2013 Major League Soccer regular season schedule, the Philadelphia Union ere gleefully proving the pundits wrong by outplaying highly favored Sporting Kansas City.  They almost made it through the first-half, only for Sporting’s Graham Zusi to cancel out Sebastien Le Toux’s 17th minute opener with a 41st minute goal.  The second-half belonged to KC, with Oriol Rosell scoring in the 66th and Claudio Bieler adding a third goal in the 83rd minute.

“Everything we thought we could take advantage of worked, and it didn’t just work for a couple minutes. It worked for most of the first half,” Philadelphia coach John Hackworth said. “If we executed on the chances that we had, we walk into halftime up two, maybe three goals and unfortunately that didn’t happen. Then it’s a matter of us managing the game, reading critical moments and execution and on the flip side, that’s what Sporting KC did tonight.”

Considering they scored, Philadelphia didn’t have the worst opening day performance on Saturday.  Far from it, since they were the only losing team to get on the board.  Vancouver shutout Toronto 1-0 at BC Place on a 59th minute Gershon Koffie goal.

“I think it’s very good to get our first win the first game of the season,” Vancouver coach Martin Rennie said. “It’s always a bit of a nervy affair, and in the first half we were a little bit scratchy in our passing and in our technique.”

Houston kept the trend going with a 2-0 win over DC United.  An own-goal put the Dynamo up in the 80th minute with Ricardo Clark scoring in the 89th.  Dallas shutout Colorado 1-0 at FC Dallas Stadium with Jackson’s 11th minute goal the difference.

“As I said to the guys, you know we did not have a real good performance,” Dallas coach Schellas Hyndman said. “We have had better training sessions than what we showed. At the same time we showed a lot of character, a lot of discipline and commitment to defend, and to come away with the three points. The three points is three points that Colorado does not have.”

In the first real surprise on opening day, Seattle was on the wrong side of a 1-0 score line at CenturyLink Field, losing to Montreal.  Davy Arnaud scored the game’s only goal in the 35th minute.  Columbus had no issues in front of a noticeably small crowd at the Home Depot Center, seeing off Chivas USA 3-0.  Federico Higuain opened the scoring in the 51st minute with Josh Williams doubling the lead in the 88th.  Dominic Oduro scored the Crew’s third deep into stoppage time.

“Tonight, Columbus was the fair winner,” Chivas USA coach Jose Luis Sanchez Sola said. “However I liked the way my team played and how we fought throughout the game, but we need some more tools to solve the game and I need to provide those tools for my team, I’m responsible for that. I didn’t provide the tools to my team but I have what is hard to get, a team that fights the 90 minutes of the game. I’m very proud of my team and this is just the beginning.”

Sunday looked to continue the lopsided version of the shutout trend, with the Galaxy beating Chicago 4-0.  Mike Magee scored the first three of those goals, with Robbie Keane adding the fourth in the 80th minute.

Portland and New York changed the plot with the Timbers staging a comeback for a 3-3 draw on national cable.  New York opened the scoring on the road through Fabian Espindola in the 9th minute.  Portland drew level in the 14th when Diego Valeri scored, but Espindola had the Red Bulls in front by the 24th.  Jamison Olave doubled New York’s lead in the 28th minute.  Portland’s comeback started with Darlington Nagbe’s goal in the 56th minute and New York provided the equalizer in the 83rd by putting the ball into the back of their own net.  It was Portland pushing late, but unable to come up with a winner.

In the final game of opening weekend, Real Salt Lake scored twice in the second-half to… you guessed it… shutout San Jose 2-0 at Buck Shaw Stadium.  Alvaro Saborio had both goals, scoring in the 71st and 85th minutes.

“They are a very good team. They have the Supporters’ Shield, so we have to come here and make our opportunities happen,” Saborio said.

1. It’s easy enough to play up or down Week 1 results, but two teams had gut check moments that already speak to major problems.  First on that ballot is Philadelphia.  It’s tough for any club to see their plans work for 40 minutes and then revert to what everybody expected.  Sporting KC is a good team, full stop.  Philadelphia isn’t, and they’ve got to get over what they showed in the first-half if they really want to improve.  Chivas USA was just plain bad against a workmanlike performance from Columbus.  There’s no upside to glean from that game.

2. New York surviving against Portland’s second-half onslaught might be the biggest indicator for who turns into a power in the East.  No, the Timbers aren’t great and New York squandered a lead as much as Portland fought back.  Then again, New York didn’t lose on the big stage in front of the kind of home field advantage that puts off other teams.  In 2013, it’s away out West that will determine the Eastern powers.  For those wondering if you can make a similar case for Montreal with their win over Seattle, mark us down for a definite maybe.

3. Don’t make too much of Chivas USA’s attendance on Saturday night unless of course you really want to.  Some, bordering on a lot, of this is on the wonderful schedule-makers at Major League Soccer for putting back-to-back games at the Home Depot Center over opening weekend.  The Galaxy have their own relative to scale attendance problems and are well aware that their might be 20k soccer fans willing to spend on their product but there aren’t 30k.  Into that environment, MLS went with Saturday and Sunday games in the same stadium.  So take that 20,124 the Galaxy announced versus Chivas USA’s 7,121 the night before as an indication that MLS doesn’t do enough to protect its product.