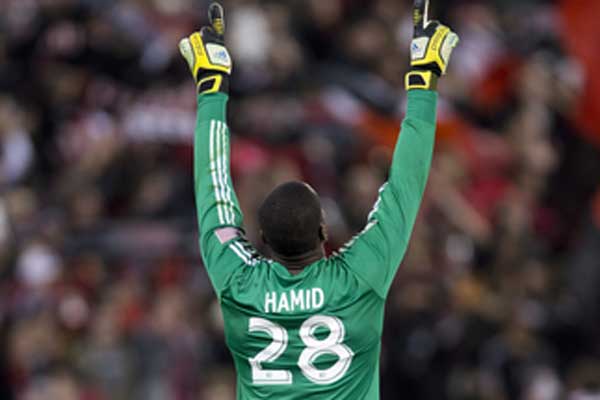 Canada’s issues competing in this league are over!  Chivas USA will surprise people!  Last season’s show of strength from Kansas City won’t carry over in 2013!  New York can’t turn a lead into a win!  And so on and so forth.  It’s the second week of the season, so let’s at least pretend we can control the impulse to go pundit crazy all over the MLS schedule.

Yes, the Canadian clubs did quite well.  Toronto beat Sporting Kansas City 2-1 in front of25,991 at their cold weather home Rogers Center.  Robert Earnshaw scored three minutes in and doubled that lead from the penalty spot in the 21st.  Claudio Bieler pulled a goal back in the 77th.

“I thought we didn’t play very well in the first 45 minutes,” Sporting KC’s Jimmy Nielsen said.  “We lost it in the first 45.  I think we played a very good second half.  I hope that will be a lesson for us, everybody would have that in their minds, what to do and what not to do.  It’s definitely not what to do what we did in the first half.”

Vancouver continued the show of Canadian strength with their 2-1 win over Columbus at BC Place.  Gone was the lackluster soccer on display last week at the same venue.  In its place?  Daigo Kobayashi opening the scoring for the Whitecaps in the 6th minute, Jairo Arrieta equalizing in the 46th, and Kenny Miller scoring Vancouver’s winner ten minutes later.  Finishing off the Canadian dominance in the second week of the season, Montreal knocked off Portland 2-1 at JELD-WEN Field.  The Impact led by two goals with Hassoun Camara’s opener in the 31st and Felipe Martins’s winner in the 60h minute.  Ryan Johnson scored for the Timbers in the 80th minute.

Philadelphia shook off a tough second-half in week 1 with a 2-1 win over Colorado in Week 2.  This game had to be moved from Saturday to Sunday due to weather conditions in Commerce City.  Amobi Okugo opened the scoring for the Union in the 34th minute.  Colorado equalized in the 69th, with Jack McInerney scoring Philly’s winner ten minutes later.

Chivas USA also turned around a disappointing opener with a 3-1 win over Dallas at The Home Depot Center on Sunday.  Dallas opened the scoring on the road with a goal from David Ferreira in the 57th minute.  Juan Agudelo equalized in the 68th and Oswaldo Minda scored the winner in the 76th minute.  Giovani Casillas added a third goal deep into stoppage time.

In Sunday’s MLS Game of the Week on ESPN 2, San Jose converted a stoppage time penalty to beat New York 2-1 at Buck Shaw Stadium.  Eric Alexander opened the scoring for the Red Bulls in the 17th minute.  Adam Jahn equalized in the 83rd minute.  In stoppage time, Chris Wondolowski had his first penalty attempt blocked only for the referee to call encroachment.  Wondolowski setup a second attempt and converted to take all three points.

1. If it wasn’t clear from our intro, it’s too early to tell about any team in this league.  Week two heroics still count, but they need to be measured against more than what happens over the opening couple of months.  In the opening weeks, it’s simply far too early to start examining trends.  Does this really need to be stressed?  Apparently, it does.  What we can look at early on is responses from week-to-week.  Chivas USA and Philadelphia chased what might’ve been dispiriting losses with wins, the best response.  Portland chased a surprising comeback with a Week 2 loss against a team they should beat at home.

2. Yes, it’s still Week 2 and it’s too early to refer to anything as ‘of the season.”  Still, do MLS postgame quotes get any better than what we heard from Chivas USA’s Jose Luis Sanchez Sola?  “In this team we are all obligated to play soccer, but nobody is obligated to do the impossible.  However, this team today got to the edge of the impossible.” In the official quote sheet, they felt the need to tell us the team in question was [Chivas USA].  Yeah, we got that, and Dallas got a nice compliment since they’d have to be quite the team when only ‘the edge of the impossible’ can beat them.  Still, it’s quite the quote.

3. Jason Kreis went out of his way to make sure no one was confused about his opinion on Real Salt Lake’s inability to win a game at RFK.  Shocked looks all around, it’s not a concern.  “We have a few places where we haven’t won, and I’m sorry, I just don’t give it much thought. I’m sorry, I don’t care. I know everybody really wants to care, but I really don’t care.”  Let’s assume Kreis doesn’t care, should he?  Probably not.  MLS likes to build up home stadiums as fortresses, but Salt Lake’s season isn’t likely to tilt on a Week 2 visit to the oldest stadium in Major League Soccer.  Some stats can wait for bigger games.