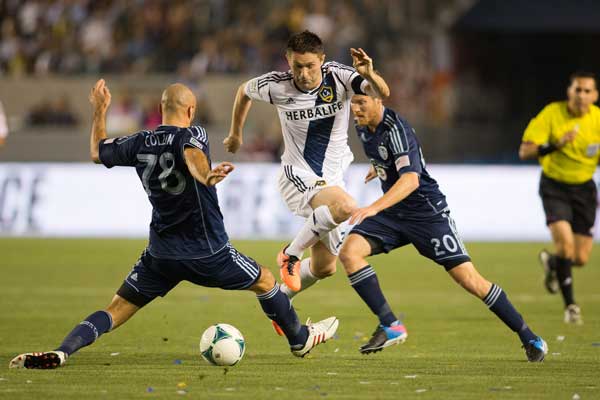 By Clemente Lisi – NEW YORK, NY (April 22, 2013) US Soccer Players – The MLS season may be young, but we are at a point where we can start to get a snapshot of which teams are playoff contenders and which ones are not, which players are scoring and which ones are not. It also gives us the chance to look at Major League Soccer overall and whether these trends will persist into summer.

In the Eastern Conference, Montreal is hot. In the West, ditto for Dallas. Although it is still relatively early (only eight games for most teams), trends are starting to emerge. Getting off to a good start goes a long way in Major League Soccer, especially if teams hit a losing spell over the summer or down the stretch. Points gained now come in handy later. Why work yourself out of a hole – like DC and Seattle have created for themselves – when you can be near the top of the standings from the start and ride the wave of optimism.

Heading into Week 8, with nearly 1/4 of the season done, there are other things we have learned by looking at the piles of statistics MLS likes to churn out every few days. From who is scoring to a goalkeeper’s goals-against-average, there is always someone, somewhere in MLS, doing something.

The start of the 2013 season has confirmed a few suspicions we all had over the offseason. The East will be a tight race. If the season had ended this past Friday, for example, then Toronto FC would have missed the postseason by just two points. Of course, the MLS regular season is more of a marathon than a sprint. But this snapshot in time does give us some clues into how teams will do over the next few weeks and months if they sustain the momentum.

Below is a statistical breakdown so far and what may occur this season:

Situation: Over the past three seasons, the first-place finisher in the Eastern Conference has averaged 15 wins and no fewer than 13. This season, however, it is possible that 13 wins gets you the top seed in the conference. Of course, getting the No. 1 seed – or even getting the Supporters Shield for best overall record – does little to guarantee a team MLS Cup success. Only six times (out of 17) has a team added the MLS Cup to its Supporters Shield trophy. In 2012, Sporting Kansas City finished first with an 18-7-9 record, good for 63 points. In 2011, Sporting Kansas City again finished tops with a 13-9-12 record (51 points). In 2010, the New York Red Bulls went 15-9-6 (51 points) to finish on top. That’s an average of 55 points or 18.3 wins. If that’s the case this season, then Montreal is 14 wins from finishing on top. Just to make the playoffs (based on 2012 when Houston finished fifth with 53 points with a 14-9-11), Montreal needs 10 wins. That is something totally doable, barring an epic collapse.

Situation: The Western Conference is a little different. The last four MLS Cup champions have come from this conference: Real Salt Lake (2009), Colorado Rapids (2010) and Los Angeles (2011, 2012). There also seems to be less parity on the Western side. Last season, San Jose Earthquakes came in first with a 19-6-9 record. FC Dallas, which is currently in first, is off to a roaring start, already at 5-1-1. It’s hard to see Dallas not making the playoffs. Making this season’s start even more spectacular is that the team didn’t make the playoffs last year. The Western Conference will be less tight than the East. This was the case last season. San Jose had 23 more points than the Vancouver Whitecaps, the fifth team that reached the playoffs. By contrast, the gap in the East between first and fifth was 10 points (KC 63; Houston 53). Heading into this weekend, Dallas had an eight-point lead over Vancouver, who was fifth.

Possible outcome: FC Dallas maintains its momentum, but fails to win the West. Look for Los Angeles or Real Salt Lake to grow as the season progresses.

Situation: MLS goal scorers are not doing as well as they did last season. Week 6 saw an average of 1.56 goals per game, bringing the season average to a dismal 2.24 goals a game. That average is lower than the season average at this point of the season compared to the League’s previous 17. Last season, the regular season ended with an average number of goals of 2.68, the highest in four years.

On an individual level, things are also down. To keep up with the season record-tying pace set in 2012 by Chris Wondolowski’s 27 goals will be hard to replicate. Heading into this weekend, top scorer was LA’s Mike Magee (in five games) and Toronto’s Robert Earnshaw (in six games), both at five goals. Unlike teams, individual players, especially strikers, can’t stay on the same blistering pace for an entire season. There are peaks and valley (not to mention injuries).

Possible outcome: No one will set any records this season for scoring. The League average will pick up over the coming months, but look for it to hover around 2.5.

This is another category that follows a record year. In 2012, the League’s average attendance was 18,807 (the highest ever), breaking the record set in its inaugural year 1996. That figure was also up five percent compared to 2011.

This season, so far, the average is a respectable 17,744. That figure has been boosted by a Week 7 average of 19,677. That was the second-highest total of the season following Rivalry Week’s 23,140.

Possible outcome: Interest will remain strong in MLS. Look for another record-breaking season.