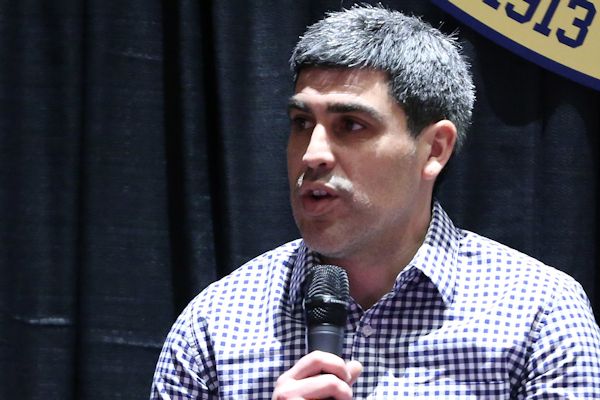 By Charles Boehm – WASHINGTON, DC (Apr 26, 2012) US Soccer Players – Claudio Reyna climbed heights reached by only a select few other American players during his glittering 14-year career, and since retiring in 2008 he’s spent much of his time working to make it easier for others to follow in his wake. Through his role as US Soccer’s youth technical director as well as the foundation he created to bring the game to more urban communities across the greater New York region he calls home, Reyna has his eyes on the future.

In 2011 he led in the creation of US Soccer’s new coaching curriculum, a sweeping document “designed to improve development of players in the organized player base in the United States, concentrating on creating more organized, age-appropriate training sessions, developing coaching practices and creating an environment that is fun for the players,” in the words of the Federation.

This week, almost exactly two years after the curriculum was unveiled at Nike’s world headquarters in Beaverton, Ore., USSoccerPlayers.com had an opportunity to chat with Reyna in depth as he visited the nation’s capital to deliver the keynote speech the US Soccer Foundation’s annual Urban Soccer Symposium at Georgetown University.

“I think we’re really diving into it,” he said of the wider youth development debate in the US soccer community. “For so long it was, ‘Oh, it’ll happen, kids will develop…’ I definitely feel if I were to look at a player’s path today, compared to mine, I would think it’s better today: being able to, first of all be identified at a much younger age for US Soccer if you’re an elite player. And to just start off the game in a local town, play rec soccer – it’s available for any kid, except this urban, inner-city population that we’re trying to tackle.”

The curriculum and its emphasis of possession, technique and intelligent movement (predominantly via the basic shapes of a 4-3-3 formation) were met with cautious optimism by members of the coaching fraternity. Now, 24 months down the road, Reyna holds a similar attitude as he surveys the progress made – not just during that timeframe, but also since his own coming of age in the early ’90s.

“For so long it was sort of this gray area where players popped out and made it somehow, but there was no identical path,” he said. “From my path to Brian McBride’s to Clint Dempsey’s – every single national team player, no one from [age] 13 went up the same path, and that’s what’s happening around the world in other ages – kids play at one club from nine, 10 then they go up to the first team, that’s their path.

“And in the US, through our research we found that everyone’s path was almost a roll of the dice, and by luck in some ways, and by obviously, talent and hard work. But still, it wasn’t a clear path so I do think we’ve made big steps moving forward and youth development is being taken seriously,” he continued.

Reyna was speaking in the aftermath of Bayern Munich’s 4-0 demolition of European and world soccer’s incumbent role models FC Barcelona, and he took pains to clarify that despite the impressions of some observers, the Spanish juggernaut’s ethos had influenced but not dominated his curriculum’s ideas.

“I think a lot of people say that because Barcelona is sort of this other-galaxy-type team,” he said. “There are some things that we grabbed out of what they do, but I wouldn’t say exactly like that. It’s possession-based soccer, and whether it’s Barca, Arsenal, Man U, Bayern – all the leading teams and national teams, they all have a possession-based [approach].

“They’re able to keep it, they’re able to move it, and however they develop their strategy behind that is a little bit different. Some are more counterattack, some are more direct – Manchester United is more direct to the goal, and Barcelona is more of this ‘move the ball around until they tire out.’ But it’s still all based out of being able to keep the ball and possess it.”

Reyna considers himself only “a small part” of the larger effort to improve the quality of players and teams across the country. Yet he also hopes to exert influence on the crème of the youth crops via careful evaluation of the US Soccer Development Academy’s member clubs over the long term.

“With what’s mentioned in the curriculum, we want to be able to give sort of boundaries, and let the teams evolve in their own way. They might grab what we do but they might just tweak it a different way,” he said. “We feel that good players will develop in an environment where soccer is trying to be played the right way.”

In addition, yes, Reyna wants even the best DA teams to put form before function, because he believes it produces better prospects for the national teams.

“If I’m going to a youth game, I want to be entertained. I don’t want to see a 1-0 boring draw where a U-15 team is packed in, stealing a goal, [winning] 1-0,” he said. “I know that makes the U-15 team very happy, but we almost want sort of this free game in the youth game where they’re going back and forth and teams are winning 5-3, versus hanging on for 1-0.

“So these are things that we’ve got to continue to hammer in and talk about, and when we bring the youth national team players in, we can really highlight a little bit more what we’re trying to do through the national teams.”