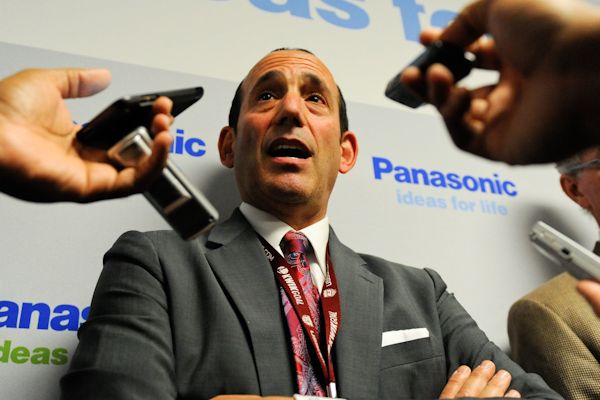 By Jason Davis – WASHINGTON, DC (Apr 26, 2013) US Soccer Players – After several weeks of silence – the type that usually doesn’t portend well for public efforts to get a stadium built in one of the most difficult cities in the world to build a stadium – Major League Soccer commissioner Don Garber announced in Toronto that the league hopes to make an expansion-related announcement in the next four to six weeks. After some confusion surrounding the nature of the teased announcement, the league went to great pains to make sure it was clear it would be in regards to the proposed team in Queens.

Now for four to six weeks of rampant speculation. It would be odd for the League to set up everyone up for a letdown, so it seems safe to assume they expect to relate positive news on the New York front come May or June. While another team in the New York market would have massive ramifications for MLS from a commercial standpoint, the wisdom of betting on a market that has yet to fully support the New Jersey-based New York Red Bulls remains a point of contention among fans.

The variables that keep the Red Bulls from maximizing the potential of New York are difficult to ignore. Their marketing efforts, particularly in the areas most critical to the success of a team in Queens, are minimal. Their location, on the other side of a snarl of roads, bridges, tunnels, and trains from Queens and immediate vicinities, makes drawing from the eastern side of the city difficult. Any argument that ignores those issues, or minimizes the ability of New York (a city with a metropolitan population of approximately 20 million people) to support a second team in that location, is transparent in its bias. Those who argue against an MLS team in Queens aren’t really arguing that it won’t work. They’re arguing other cities “deserve” it more. Or, that MLS should “protect” the Red Bulls from their own incompetence.

Of the other candidates, Orlando seems the most “ready” (although they have stadium deal hurdles to clear). San Antonio has the (expandable) stadium in place and an enthusiastic fan base (although the Scorpions are only in their second year). Atlanta is a large city in the Southeast, where the league needs a team (although there’s not much buzz).

The only problem is that MLS isn’t in the business of dolling out franchises based on checklists. Nor should they be. The current recently-set precedents says a city should have a lower division side first; it says a city should have an existing fan base, preferably organized, clamoring for a team; it says an ownership group independent of MLS should be behind the push. Yet none of those things are in and of themselves guarantees of success, nor are they applicable in New York. New York is special. Denying that fact won’t change it.

There’s an element of panic about MLS these days when it comes to the Queens project, however. Mayor Michael Bloomberg backs the stadium, but leaves office at the end of the year. The continued progress of Orlando puts pressure on MLS they might not be able to withstand, and they’ve been clear that the preference is to get New York done before moving on to other candidates. Then there’s the New York Cosmos, on the verge of a revival in Queens’s backyard on Long Island, with their own big plans for a fancy stadium. The proposed site for the Cosmos 25,000 seat arena is about ten miles from the Flushing Meadows location MLS is targeting.

On Thursday while talking to Associated Press sports editors, Garber said, “The Cosmos are a very storied brand steeped in the past. Pele is not playing for them anymore, and neither is Franz Beckenbauer,” a clear shot at their ability to be relevant in a modern American soccer context. It was the first indication that some resentment resides at MLS headquarters over the Cosmos and their plans. It’s the first crack in a previously stolid face of denying the Cosmos plans (which don’t involve MLS at this juncture) had any particular impact on MLS and its goals.

Rather than the outwardly stated goal of entering a new New York team into the market as a natural rival to the Red Bulls, it seems MLS is on the verge of a de facto, off-field, rivalry with the Cosmos. Maybe it was always there for us to see, but Garber and his staff did a good job of burying those concerns, at least publicly.  A race to the finish line with the Cosmos could cloud judgment so many are already keen to declare faulty. A race with the Cosmos gives more ammunition to critics who see the New York project – so unique by recent MLS expansion standards – as a Garber-led boondoggle.

MLS says an announcement is coming. It defies logic that they would tease an announcement that the New York project is dead, or on hold, or unlikely to succeed. Yet, no visible progress exists in New York government (though that might be more a function of the opaqueness of New York government) and the city is now engaged in multi-million dollar city-funded refurbishment of two soccer fields within the footprint of the proposed MLS stadium. If MLS is on the verge of announcing progress there, why is New York spending money to fix those fields?

Therein lies the problem with Major League Soccer’s quest to expand into New York, a market it clearly believes remains untapped. The process creates questions, and whether there’s a legitimate argument for placing a team in Queens or not, critics of the effort needn’t look far for proverbial grenades to lob in Garber’s direction.

A team within the boundaries of the five boroughs of New York City might just be the rocket ship that takes Major League Soccer to a new orbit of television revenue and marketing clout. It might not. We know where Major League Soccer’s money lies, and in four to six weeks we’ll find out if that bet has any chance of paying off.

Even if the bet comes through, don’t expect it to silence the vocal dissenters. It’s going to take a lot more than a single step forward to convince them all of this is a good idea.