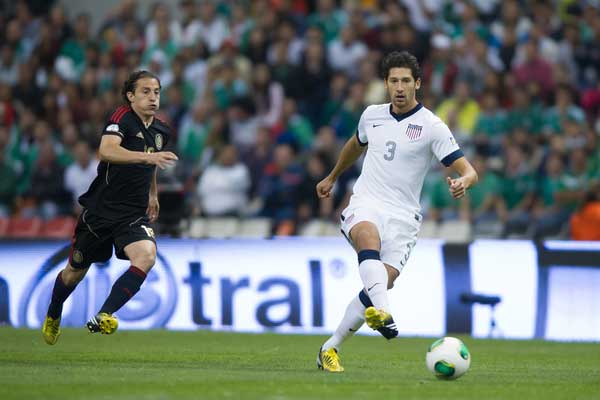 By Charles Boehm – WASHINGTON, DC (Apr 5, 2012) US Soccer Players – It’s hard to think of a modern-era United States National Team player who endured a rougher introduction to the rigors of World Cup qualifying than Omar Gonzalez.

Thrown straight into the starting lineup in his first-ever qualifier by head coach Jurgen Klinsmann, February’s 2-1 road loss to Honduras, the LA Galaxy center back struggled in the harsh conditions of San Pedro Sula. Gonzalez lost his mark on the game-winning goal, earning harsh reviews (including several ratings of 3.5 out of 10) from pundits.

Six weeks later, the picture changed dramatically as Gonzalez proved a quick study at the international level, moving on from his baptism by fire with two brave, composed performances in last month’s positive results against Costa Rica and Mexico. The tall Texan was a rock at the back as the USA took an impressive four-points, stabilizing the Yanks’ World Cup prospects and calmed the frayed nerves of fans.

“The whole week was great. I felt a lot more confident coming into this camp than my first one, just being around the guys felt a lot more comfortable,” Gonzalez told me and several other reporters after LA’s training session at Georgetown University last week. He had just rejoined his club teammates after the USA’s 0-0 draw at Estadio Azteca in Mexico City, a game causing him to miss out on the Galaxy’s celebratory trip to the White House.

“So I kind of got settled in and two good performances, starting with a great battle against Costa Rica, which I think really built some good chemistry,” he continued. “We fought the whole game and fought for each other, which was great. I think everyone saw that on TV. And that just led to another great performance in Mexico where again, we all worked together and worked towards the same goal.”

According to Gonzalez, that rough outing in San Pedro Sula was actually a welcome introduction to the demands of high-pressure national team occasions.

“Honduras, that atmosphere was as tough as it gets, with the humidity and the heat, the field, the fans,” he said. “That was a great way to start off my career with the national team. I think learned a lot from that game and I felt a lot more prepared for going into Azteca.”

At that point it was easy to forget that Gonzalez was until fairly recently an outsider to the National Team setup, an MLS standout whose club exploits did not translate to a call-up in the order many fans hoped and expected. Now he finds himself at the forefront of Klinsmann’s quest for generational evolution along the back line.

“I think that I’ve been ready for that level for a while now and it’s great to be in the mix,” he said of his transition to international play. “It’s great to get that kind of recognition. But that’s not what I’m looking for, I’m just looking to be on the team, do my job, help win games and qualify for the World Cup and do whatever I can to be a part of it.”

Gonzalez admitted that he’s been on the radar of the Azteca’s home club, Mexican giants Club America, for some time.

“We’ve talked before, nothing as of late. But I wasn’t there to just impress them, I was there to win a game,” he said in DC. Gonzalez holds further ties to Liga MX on account of his uncle’s career with Monterrey some three decades ago. In fact, as he waited with growing frustration for his US call-up, Gonzalez openly mulled switching his national team allegiance to the country of his parents’ birth.

“They never came around,” he said last week. “But who would’ve known, if they did come around, what I would’ve done? I don’t know what I would’ve done. But I’m really happy that I’m here with the US. It’s been a dream for me since I was a young boy and now I’m living out my dream.”

Unfortunately for Gonzalez, his next showdown with Mexican opposition did not play out quite as happily.

On Wednesday night the Galaxy hosted Monterrey in the first leg of their CONCACAF Champions League semifinal at the Home Depot Center, and the MLS representatives fumbled away a 1-0 lead in the dying moments when Rayados stars Humberto Suazo and Aldo de Nigris struck to snatch victory from the jaws of defeat. It was Gonzalez whose concentration flagged momentarily as he lost his mark on de Nigris’ 90th-minute matchwinner.

“Oh, man, I just fell asleep on that last play. It was pretty poor on my part, and I should have done better there,” Gonzalez told MLSsoccer.com afterwards. “I saw the cross coming, saw it coming, but my body just wasn’t moving. I’ve got to do better there. Just got to learn from it and, hopefully, it will never happen again.”

Now LA must travel south and make history of even greater significance than the USA’s scoreless draw. Few foreign teams have ever won in CCL play on Mexican soil, and the Galaxy will face a must-win situation at a sold-out Estadio Tecnológico on Wednesday in Monterrey.

So the learning process continues for one of the USA’s brightest center back prospects, as he finds that his usual rewards for high achievement are increasingly tougher assignments on bigger stages, with slimmer margins for error.