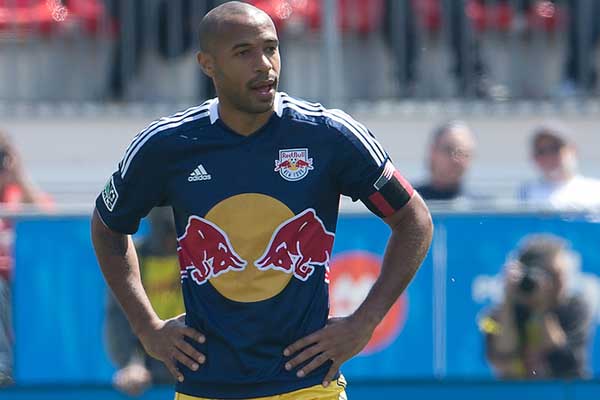 We open in Toronto, where the historically hapless Toronto FC might not be winning in 2013, but they also weren’t losing. Their run of four draws in a row ended at home with a 2-1 loss to New York.  Tim Cahill opened the scoring for the Red Bulls in the 39th minute with Toronto’s Jonathan Osorio equalizing in the 83rd. The road to another point for TFC seemed set, only for Cahill to score again in the 89th minute. Unfair to Toronto? Maybe, with the Reds leading in shots, shots on goal, and corners.

At Saputo Stadium, Montreal shutout Toronto 2-0 with goals from Andres Romero in the 57th and Marco Di Vaio in the 76th. Chicago played a man down after the referee sent off Jeff Larentowicz in the 63rd minute. Vancouver did the rest of the Western Conference a favor by splitting the points with leaders FC Dallas in a 2-2 draw. Vancouver inadvertently opened the scoring in the 9th minute with an own-goal and it was 2-0 Dallas when Matt Hedges scored in the 47th. Vancouver’s Kekuta Manneh scored in the 72nd and Camilo equalized three minutes later. The referee sent off Dallas’s Jackson in the 78th, but Vancouver was unable to get a winner with the man advantage.

New England shutout Philadelphia 2-0 in front of an announced crowd of 18,383 at Gillette Stadium. Diego Fagundez opened the scoring in the 61st minute and Lee Nguyen made it 2-0 ten minutes later. Staying in the East, the Crew shutout DC 3-0 at home with goals from Dominic Oduro (15th), Josh Williams (26th) and Federico Higuain (47th – penalty). The referee cautioned seven players, four from the Crew and three from United. During the pregame, Crew Stadium’s scoreboard caught fire. The game went ahead on schedule.

“I’ve got to tell you that I don’t think there’s a page in our book that talks about scoreboard fires, but certainly fires in general are a part of our safety plan,” Crew president Mark McCullers said. “I’m really proud of our staff and the way they responded; they were calm, they were professional, and they were expert in what they did.”

Portland beat Sporting Kansas City 3-2 on the road, with Sporting taking the lead less than 60 seconds in when Chance Myers scored. Ryan Johnson equalized for the Timbers in the 24th, but Myers put KC up again in the 29th minute. That lead held for all of four minutes, with Darlington Nagbe equalizing in the 33rd. Rodney Wallace scored Portland’s winner in the 58th minute.

At Rio Tinto Stadium, a reworked Galaxy without its starting forwards Landon Donovan and Robbie Keane shutout a reworked Real Salt Lake 2-0. At least LA had some idea of their lineup, with RSL’s Robbie Findley and Alvaro Saborio scratched from the lineup during warm-ups. Mike Magee opened the scoring in the 6th minute with Charlie Rugg doubling the lead in the 13th.

“It wasn’t just Donovan and Keane,” RSL coach Jason Kreis said. “There were five players that started tonight with the Galaxy that aren’t typically in their strongest eleven. So much so that when I got their lineup I was nervous to even write it up on the board. I was wondering if there was any way I could just sneak it in that they were playing LA’s strongest lineup. I feel that our guys have had a tendency over the past to let down when they are playing a team that they think is weaker than they are; and tonight they got shown that team isn’t weaker than we are. Their eleven was better than our eleven.”

At the Home Depot Center, Chivas USA and San Jose drew 2-2. It was the Earthquakes opening the scoring in the 40th minute through Chris Wondolowski. Mario de Luna equalized for Chivas USA in the 4th and Tristan Bowen put them ahead four minutes later. San Jose’s Cordell Cato split the points with a 76th minute equalizer. San Jose outshot Chivas USA 21 to 7, putting 7 of those on frame to Chivas USA’s 3. Houston and Colorado finished 1-1 at BBVA Compass Stadium on Sunday. Drew Moor opened the scoring in the 47th minute with Giles Barnes equalizing for the Dynamo in the 66th. The referee sent off Houston’s Brad Davis in stoppage time.

1. Peter Vermes is talking specifically about his club in describing their primary problem in that 3-2 loss to Portland, but he might as well be talking about every team in MLS week-to-week. “The problem is that we just gave the ball to the other team,” he said. “You can’t give balls away so the other team can counter. It’s one thing if you serve it into the box, the ball gets cleared and then they go from there. But it’s another thing to just give a clear pass to a guy. It wasn’t just wide guys, it was central midfield guys too. We just gave away the ball away way too easy which put us under pressure too many times.”

2. If it’s finally time to talk about the standings, is it too early to talk about goal differential? In terms of what it means as a tiebreaker, yes it is. Still, goal differential does show how teams separate themselves in the early going. It’s an obvious point, but a better goal differential means winning games by multiple goals. LA leads the league in differential at +8, two goals better than Western Conference leaders Dallas. LA’s also played seven games to Dallas’s nine.

3. It’s odd talking about wakeup calls for teams in the bottom half of the table with only one win, but the more you look at what Toronto FC coach Ryan Nelsen had to say after their 2-1 loss to New York, the more it starts to make sense. Dallas finished with the most ties in MLS last season, just missing the playoffs with nine wins. No team made the postseason with more ties than wins.  In 2012, it was a different story. Four teams made the playoffs with more ties than wins, but all of those teams finished with double-digits in the win column. Toronto’s ratio is four ties for one win after eight games. Ninth in the East, they already know that’s not good enough. As Toronto’s Jeremy Hall said, “It’s got to stop. We are dropping points.”