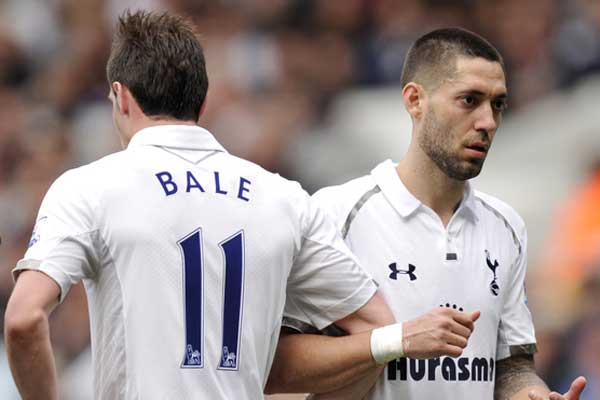 Clint Dempsey scored for Tottenham in their 3-1 win over Manchester City, complicating the Champions League picture in England's Premier League.  Spurs trailed from the 5th minute at White Hart Lane, but Dempsey equalized in the 75th and they went ahead from a Jermain Defoe goal four minutes later.  Gareth Bale added a third in the 82nd minute.  The win has Spurs in 5th-place with 61 points, a point behind Chelsea and two points behind Arsenal.

"The fans raised the roof and that gave us even more belief to go forward and we were able to score two more after that," Bale said.  "All three goals were important. The first gave us the belief, the second killed them off a little and the third sealed it. It was a great comeback.”

The news wasn't so good for Tim Howard's Everton, shutout 1-0 by Sunderland.  Everton are 6th in the table, but now trail Spurs by five points with 34 games played to Tottenham's 33.  Geoff Cameron was a stoppage time substitute in Stoke City's 2-0 shutout of QPR at Loftus Road.  Peter Crouch opened the scoring in the 42nd minute and Jonathan Walters made it 2-0 from the penalty spot in the 77th.

In Norway's Eliteserien, Mix Diskerud scored in Rosenborg's 3-1 loss to Haugesund in front of 5,391 at Haugesund Stadion.  Haugesund opened the scoring from a 15th minute penalty and doubled their lead in the 35th.  Diskerud pulled a goal back in the 51st minute.  A red card to Rosenborg in the 66th made things easier for Haugesund, scoring their third in the 89th minute.

Staying in Europe, Alejandro Bedoya's Helsingborg shutout Brommapojkarna 2-0 in front of 2,083 at Stockholm's Grimsta Stadium.  Mattias Lindstrom opened the scoring in the 6th minute and Robin Simovic doubled the lead in the 84th.  The referee cautioned Bedoya in the 58th minute and he subbed out in stoppage time.  In Belgium's playoffs, Sacha Kljestan's Anderlecht lost 2-1 to Zulte Waregem, who took a two goal lead before Dieumerci Mbokani scored in stoppage time.  The loss drops Anderlecht to 2nd-place trailing Zulte Waregem by a point midway through the playoffs.  Kljestan subbed out in the 74th minute.

In Holland's Eredivisie, Jozy Altidore subbed out in the 54th minute in AZ's 3-1 loss to PSV at AFAS Stadion.  PSV led 3-0 when Aron Johannsoon scored for AZ in the 86th minute.  Altidore left the game with an injury that isn't expected to cost him additional playing time. Carlos Bocanegra's Racing Santander were shutout 1-0 by Villarreal in Spain's second division.  In Serie A, Michael Bradley subbed on in the 72nd minute for Roma coming back to draw 1-1 with Pescara.  With Pescara leading from the 14th minute at the Stadio Olimpico, Mattia Destro equalized in the 51st.

Fabian Johnson's Hoffenheim were on the wrong side of a5-0 shutout to Bayer Leverkusen that drops them to 17th in the Bundesliga.  Timmy Chandler's Nurnberg were shutout 1-0 by Greuther Furth.  Steve Cherundolo subbed out in the 66th minute for Hannover 96, losing 6-1 at home to Bayern Munich.  A Hannover own goal opened the scoring for the visitors.  With Bayern up 5-0, Andre Hoffman scored in the 84th minute.  Hannover are 11th in the table.  Jermaine Jones subbed on in the 64th minute for Schalke, shutout 1-0 by Eintracht Frankfurt.  Schalke missed a penalty in the 24th minute.

Mexico, and Herculez Gomez subbed out in the 74th minute for Santos Laguna's 1-0 shutout of Monterrey.  Felipe Baloy scored in the 18th minute. Jose Torres subbed out in the 84th minute in Tigres's 3-1 win over Pachuca.  Carlos Calcido (22nd) and Lucas Lobos (41st) put Tigres in the lead before Pachuca pulled a goal back in the 66th minute.  Salciso scored again in the 87th.  With 15 games played, Tigres are top of the Liga MX table with a one-point lead over Atlas.

In a tough game for the National Teamers at Tijuana, they lost 2-1 at home to Morelia.  Leading from a 34th minute Daniel Marquez goal, Tijuana gave up goals in the 74th and 76th minutes.  Joe Corona subbed on in the 70th minute and the referee ejected him in the 88th.  Edgar Castillo also saw red, sent off in stoppage time.  Michael Orozco started and DaMarcus Beasley subbed on for the second-half in Puebla's 2-0 loss to Atlante.

Freddy Adu debuted for Bahia in Brazil, subbing on in the 82nd minute in a scoreless draw with Juazeirense.