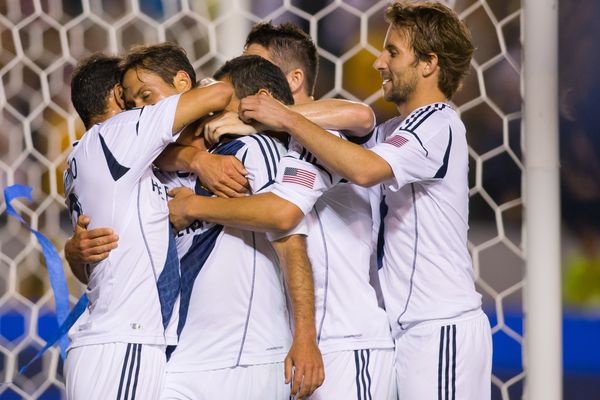 By Tony Edwards – San Jose, CA (Apr 30, 2013) US Soccer Players – In Tuesday’s column, Tony asks if this season’s MLS results suggest it’s time to start anew in Salt Lake, wonders if we already know the five playoff teams from the Eastern Conference and looks for answers to the Chicago situation.

Did the Galaxy leave any question about which is the best team, again, in MLS?

No Donovan, no Keane, no Dunivant, no Cudicini. Mike Magee was captain. Their goalkeeper had played a total of zero league minutes. Playing in Salt Lake. Of course it was 2-0 to the Galaxy. Let’s not get entirely ahead of ourselves. The Galaxy hit twice in the first quarter hour of the game, then sat back and watched Salt Lake have more than 70% of the possession and out pass Los Angeles by almost 400 passes (601 to 221).

What if it’s time to start asking questions of Salt Lake, dubbed the preseason favorite in the Western Conference by me, among others. To start closer to the ground, how can a team supposedly as good as Salt Lake allow that Galaxy team to fly home with the points that easily?

In terms of the bigger picture around that franchise, what if this past off-season’s reboot didn’t go far enough and the team needs a revamp? What if this group’s haul of one MLS Cup and one Champions League runner-up represented an underachievement rather than standard setting?

This could all be nothing but a bad game and an adjustment period. Chivas USA’s fast start, and Seattle’s early schedule has created something of an odd set of standings in the Western Conference. Still, here’s the danger for Salt Lake: They’ve always told us that just getting into the playoffs isn’t good enough. The team, as presently constructed, will make the playoffs in the West this season, but is that now good enough? Finish fourth and get the home field for the play-in game? Or, is their idea to win cups?

Are the Eastern Conference standings going to change appreciably between now and the end of the season?

I don’t think they will. The seedings will change, especially as Columbus and Kansas City figure things out and the long season forces Montreal and the Red Bulls to rest some of their veteran players, but if you look at the teams seeded sixth through tenth, there are too many weaknesses to say, ‘yeah, they could go on an extended run.’ The usual caveats apply such as injuries and transfer window signings. Toronto might be the team that proves me wrong.

Even though he made three substitutions, why did Chicago’s Frank Klopas seemingly not make any tactical adjustments on Saturday?

Any coach who keeps running out Sherjill MacDonald week after week at least gets credit for sticking with his player, or for trying to give a designated player a chance. Beyond that, what was Chicago’s plan, either before or after the red card? And what made Klopas think taking out Joel Lindpere, unless he was hurt, was going to help his team?

For good or ill, you know what San Jose, Los Angeles, Houston, and Kansas City are going to do. We are starting to have an idea about Montreal and Portland. Two months into the season and the Fire are doing their best to give the Chicago fans and media more reason to focus on baseball. What kind of team is Chicago? Are they a possession team? Do they attack quickly from wide? Try to counter-attack?

Chicago has regressed from last season’s mediocre showing and, in a more competitive Eastern Conference, they need to make major changes to compete, because the roster, as currently composed, used, and coached, isn’t good enough.

Toronto President Kevin Payne, can you give me some tips on how not to put pressure on young players?

I’ve got one for Mr. Payne, don’t compare your latest signing, Matias Laba, to Maradona or Riquelme.

“Diego Maradona, Juan Román Riquelme, [Fernando] Redondo, [Esteban] Cambiasso – they all began their careers as youth players at Argentinos Juniors,” Payne said, before informing us that Laba also matriculated there before signing as a youth designated player.

Hey, this 21-year old adjusting to a new league, new country, new coaching… let’s compare him to some of the greatest players ever.

I’m curious to see what kind of player Laba is. Is he more of an Argentinian ‘#5,’ like a Mascherano, more of a Veron/Cambiasso player, or a ‘#10?’ Also, does Nelsen ask a 21-year old to adapt or will he shape the team around this new player?

Are there better times on the immediate horizon for Colorado?

With both Martin Rivero and Pablo Mastroeni making second-half appearances against Houston, the Rapids might be approaching full strength.

Two months into the season, maybe no team has suffered from their injuries more than the Rapids, but so much of success MLS is health and roster depth. As every team in the Western Conference can beat any other team and three of the presumed favorites (Seattle, San Jose, and Salt Lake) are underperforming, Colorado hasn’t been buried by their frustrating start. However, their margin for error has shrunk and they can’t count on other teams continuing to give away points.