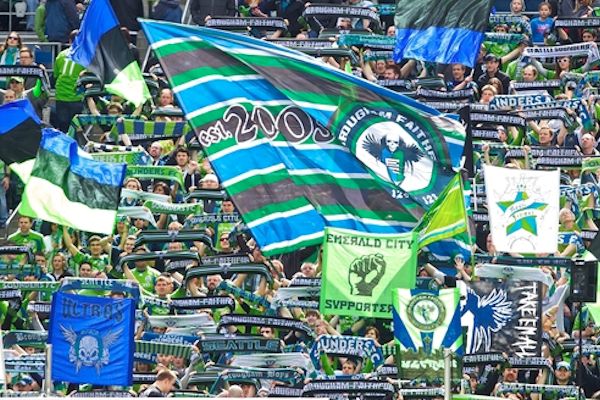 By J Hutcherson – WASHINGTON, DC (Apr 30, 2013) US Soccer Players – On Tuesday, the National Basketball Association decided that they like their league exactly how it is and wouldn’t allow the Sacramento Kings to relocate. Good news for Sacramento fans and probably good news for Seattle Sounders fans. The Kings likeliest destination was Seattle, once again reminding us that Major League Soccer doesn’t exist in isolation even in its strongest market.

With all due respect to the MLS attendance records reset by the league’s decision to expand to Seattle, it’s an interesting time in a market in transition. It’s not just the NBA allowing the Seattle SuperSonics to relocate to Oklahoma City as the highly successful Thunder. It’s the absence of competition in a market that lacks both arena sports and has a baseball team currently spending another season where contending doesn’t seem likely. In other words, there’s not a lot of competition for the summer professional sports market.

It’s been ten years since the Mariners averaged over 40,000 a game, back when they were one of those teams where sellouts were the norm. The last time they averaged over 30k was 2007. Last season’s average attendance was 21,258. That charts what a market once was for professional baseball with an indication of what might happen should the team return to relevance. It’s a question of winning for Seattle baseball. For Seattle soccer, that’s a threat, especially when the soccer team isn’t winning.

To Major League Soccer’s credit, they initially treated Seattle’s remarkable drawing power as an outlier, a combination of events particular to a single market that favored soccer. As expected, the longer Seattle continued to draw the more MLS began to treat the Sounders as the example for what an MLS club can achieve. Trophies are nice, but a reliable gate of over 40k per game might be the bigger win. It’s taking advantage of a market’s particular situation and building something that’s unique. After all, Seattle could be another team selling out a soccer-specific venue that seats around 20k. That’s MLS success as usual, not the competitive change Seattle offers every time their crowd doesn’t look out of place in that mammoth National Football League stadium.

Yes, I know. Once converted to soccer, no American sports fan would backslide towards a sport they used to follow. The change is permanent, soccer fandom is different, and so on. Except it’s not. MLS already has multiple examples of fans giving up on teams. It’s the difference between respectable crowds and problems, and we’ve seen it in markets that once upon a time seemed fully committed to soccer. Winning certainly helps, but even then there’s the pull of what’s new or what’s successful to draw fans away.

DC United might be the only MLS team to have shared a stadium with a Major League Baseball club, but the pull of the other summer sport is real. Proximity certainly doesn’t help. DC’s push for a new stadium in their preferred location would have them close enough to the Nationals stadium. With the baseball team expected to win, the crowds show up. United saw off baseball’s return to the market by sharing the same lousy stadium and putting on a better show. Now, they’re at a venue and competitive disadvantage. The Nationals winning means more fans going to games and the enthusiasm in the market shifting to the baseball team. That was obvious in 2012 and it’s not likely to change in 2013.

That’s the scenario that could play out with Major League Soccer’s expansion to Queens. Should the rumors that we’re weeks away from an announcement that expansion announcement prove true, MLS will build within sight of a professional baseball stadium. It’s dueling summer sports in close proximity. Just like in Seattle, it also involves the established baseball team currently in a down cycle.

The New York Mets averaged over 50k a game their last season in Shea Stadium in 2008. Their first season in Citi Field, the attendance dropped to around 30k in a venue that seats 45,000. Last season, they averaged 28,035. We don’t have a hard number on what a competitive team will draw at Citi Field since the Mets have finished fourth four seasons in a row. What we do know is that there are enough Mets fans in the New York market willing to go to see a winning team to fill Citi Field. When that happens, what does it mean for the soccer team next door?