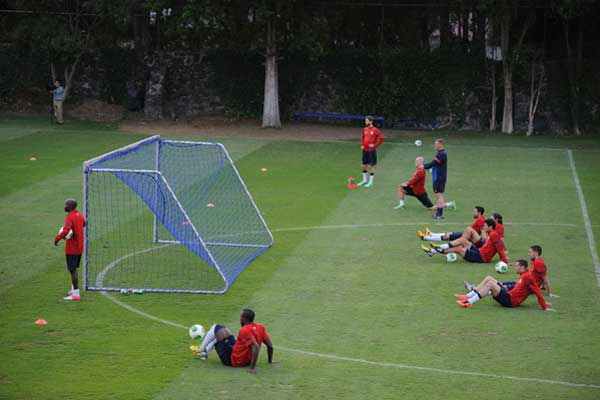 By Charles Boehm – WASHINGTON, DC (Apr 19, 2012) US Soccer Players – Last spring, ahead of the outset of CONCACAF semifinal round World Cup qualifying, US National Team coach Jurgen Klinsmann scheduled two high-profile international friendlies and approached the resulting stretch of five games in 18 days for his squad as a “a five-game tournament,” to replicate the rhythms and demands of the World Cup and other premier competitions.

“We’re treating this period of time like it would be a small tournament because this camp is a lot about how the players build chemistry and deal with a longer period of time being together,” Klinsmann said at the time. “It’s about how they are willing to go the extra mile in that time period to answer a lot of questions in that stretch. That’s why we’re calling it almost a mini-tournament.”

The US went on to post a 2-1-2 record during that phase, but their performances and results would probably not have guaranteed a banner run had they come in an actual knockout tourney.

A year later Klinsmann and his staff seem to be following an almost identical path in the lead-up to June’s three influential Hexagonal qualifiers, the first on the road at Jamaica before two massive home matches against Panama and Honduras.

Much like last year’s duels with Scotland and Brazil, the USA will host Belgium in Cleveland on May 29, then mark the apex of the US Soccer Federation’s 100th anniversary celebrations with a glamor matchup against Germany at RFK Stadium in the nation’s capital four days later. The following week brings the June 7 visit to the Jamaica National Stadium in Kingston before trips to Seattle and Salt Lake City.

In 2013, it was five games in 18 days. This time around, it’s five in 20. And while it’s too early to know if the technical staff will renew the “mini-tournament” talking points that were emphasized relentlessly before – including the team’s custom-tailored travel, training workload, nutrition, scouting, even the use of “tournament format” in the assignment of jersey numbers – the mental and physical demands are likely to be the same, if not greater, for players and coaches.

That’s because in a tightly-contested Hex already being called CONCACAF’s toughest ever, taking maximum points from home games – and avoiding stumbles of any kind against opponents likely to finish below the US in the final standings – could make all the difference for a squad still seeking their best form.

“We all know how difficult it is and how much of a grind it is,” striker Jozy Altidore told Yanks-Abroad.com this week. “We’re still trying to find out what works. I don’t think it’s any secret to see that. I think you can tell by watching any game that we’re not as fluid as we want to be. Are we getting there? Yes, but there is still work to do. These next three games will kind of dictate how the Hex goes.”

Past US coaches have prepared for similar tasks by scheduling exhibition matches against countries with similar attributes to the opponents in question. Klinsmann, as has been his wont since his arrival, has elected to seek out the toughest possible adversaries for this spring’s warm-ups.

Belgium defeated the Yanks 1-0 at King Baudouin Stadium in Brussels in his third game in charge two years ago, while Germany, even though expected to be below full-strength due to the DFB Pokal final between Bayern Munich and Stuttgart taking place on June 1, remain as daunting a test as any national team on earth.

Both will provide a welcome barometer of the USA’s overall quality. Yet the differing styles and attitudes of the subsequent trio of regional rivals should also necessitate significant tactical adjustments and perhaps different personnel in the lineup as well.

It’s a friendlier stretch of the schedule than this winter’s bearish introduction to the Hexagonal. Nevertheless, it poses stiff demands and perhaps offers even less room for errors.

“I think you have to go one game at a time,” US striker Herculez Gomez told ussoccer.com earlier this month. “You can’t go in thinking, ‘Oh my god, there are three in a row and we have to make the most of it.’ You have to prepare for one game at a time. Take care of the first, then you worry about the second. I think it’s the only way to approach these games. You have to give the respect that’s due to each and every single team you face because they’re not easy teams. It’s not an easy region, so we can’t look past anybody.”