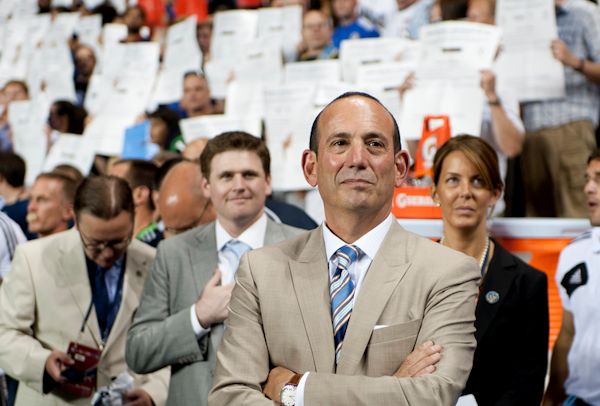 By Jason Davis – WASHINGTON, DC (May 24, 2013) US Soccer Players – There’s a saying that goes “Good things come to those who wait.” For Major League Soccer, this axiom is both truth and fallacy all at once. As the league grows and changes, rewards come slow even as the need to push and prod increases.

Such is the case of the naming New York City FC as Major League Soccer’s twentieth franchise. The combination of Manchester City’s money and the New York Yankees’ influence made the choice to sign up the stadium-less team a relatively easy one. Perhaps MLS planned to have a stadium deal in place before handing off the reigns to the new owners or announcing a start date, but the opportunity to leverage two such powerful organizations to Major League Soccer’s benefit was too good to pass up. If MLS was intent on placing another team in the New York market, it was better to act sooner rather than later.

The benefits of another MLS team in the New York metropolitan area are obvious. Additional attention on the league in the country’s largest TV market alone might excuse all of the energy expended by Don Garber and company. Add City’s wealth and the Yankees’ local influence, and it might not be going too far to say that the league had no choice in the matter. There’s a certain amount of inertia that comes with such rich and powerful organizations.

In his remarks on the launch of NYCFC, Don Garber repeatedly mentioned giving the New York Red Bulls a naturals rival in the market. Logically speaking, any New York team based in the city is an obvious geographical rival to the Red Bulls across the river in New Jersey. Nevertheless, Garber’s discussion of rivalry prompted a backlash from passionate fans of New York’s original team, who cried foul at the notion that the league should be “telling” the fans which teams are their club’s rivals. Rivalries happen naturally, they said. You can’t and shouldn’t force rivalries. Other MLS fans took up the cause, voicing their displeasure at the league dictating notions of rivalry.

While the sentiment is true, and whatever rivalry – if any – NYCFC has with the Red Bulls will develop over time, MLS fans are oddly romantic for a group whose connections to their teams are relatively recent by almost any typical soccer standard. A sense that MLS and its “corporate” mentality isn’t to be trusted seeps into any discussion of the way the league office chooses to steer the American soccer ship. There’s a stringent desire for MLS to be “authentic”, whatever that might mean in a modern context.

The reality of the situation clashes with those notions. MLS, both as a competition and as a “product” does not have the luxury of organic growth. Running directly counter to those ideals is the mandate of MLS, and especially Don Garber as the public face of the league, to do whatever necessary to push the league’s agenda getting bigger and better, and doing it in short order. No public sentiment for holding back and being satisfied exists, and even if it did, it would not sit well with a group of investors anxious to recoup the significant losses sustained during the early history of the league.

Rivalry, and Garber’s insistence on promoting it where it might not exist, is simply the flashpoint of a fundamental disconnect over how MLS can become a better, more financially prosperous league while also having something of the authentic, grassroots, community feel traditionally associated with soccer clubs. While most of the soccer world struggles with the notion of big money infiltrating a game that has been a staple of life for over a century with clubs equally as old, American soccer fans must swallow the hard truth that the livelihood of their club and their league is tied to selling a “new” product by any means possible. That includes the exploitation of rivalry, especially when geography says it should take root in some measure.

Very rarely do hardcore MLS fans take themselves outside of the bubble they inhabit to consider how selling the game necessitates things like pushing rivalries that haven’t yet formed. Simply being a fan skews your outlook. While MLS can’t afford to alienate the fans it already has, promoting the idea of rivalry between two teams that have yet to play a game is a low risk move meant to attract the attention of others.

Everything about MLS is conjured. Portland, Seattle, and Vancouver may share names with clubs whose history reaches back into a past long enough ago that most of their current fans weren’t alive, but that does not make them immune to the reality of Major League Soccer’s lack of populist history. This is a league born of the modern corporate age into a world thick with competition. In order to succeed in its mission to become of the world’s best soccer leagues, it must do everything it can to carve a deeper mark into the American sports landscape. Any other approach is dereliction of duty.

Considering the distance they have to go thanks to the youth of the league and the immaturity of the North America as a soccer region, most things are forgivable.

Perhaps it just a fact of this modern American soccer condition that the Major League Soccer’s methods and the desire of fans to have a team and a league that feels authentic will clash. Fans want to feel connected to their teams, to have ownership of their characters, and to have a part in writing their histories. MLS wants to increase the popularity of the league to bring more money, to bring more money into the game, and to lift soccer in America to a level on par with the best competitions in the world.

They are equally valid aims that make for terrible bedfellows.