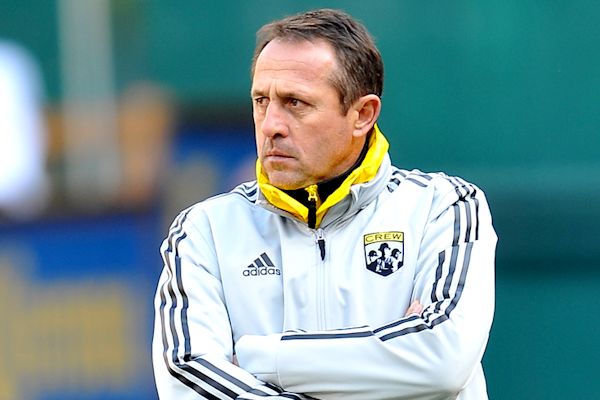 By Jason Davis – WASHINGTON, DC (May 14, 2013) US Soccer Players – Dissatisfaction is rising in the land of the yellow uniform. On Saturday afternoon in front of a home crowd at Crew Stadium, Robert Warzycha’s chosen team, playing the way Robert Warzycha directed them to play, lost to the Colorado Rapids 2-0. The goalless effort took the Crew’s run of scoring futility to 225 minutes, a frustrating run of impotency that have some among the Crew faithful wondering if it’s not time to make a chance. Specifically, a change at the top.

Warzycha has led the Crew since the 2009 season, when the team promoted him in the wake of Sigi Schmid’s departure to run the new MLS Seattle Sounders. That year, he led the Crew to a second consecutive Supporters Shield, on the back of a roster build by Schmid. Two more playoff appearances followed, though Columbus took obvious steps back and failed to advance out of the first round each time. Each time, it was the Colorado Rapids doing the honors.

Now, nearly one-third into the 2013 season, the Crew find themselves sitting in 6th-place in the Eastern Conference and struggling to find the net. Consistency is elusive, despite a strong collection of offensive talent. It wouldn’t be wrong to say that the Crew are underperforming, and when that is obviously the case, the head coach’s job security naturally comes into question.

If Crew fans are looking towards the team’s owners, the Hunt Sports Group, to send Warzycha packing, they may be in for a long wait. HSG owns two MLS clubs, the Crew and FC Dallas (remaining one of two groups – the other being Phil Anschutz’s AEG – that still controls two franchises) and hasn’t parted with a coach by their own choosing since May of 2008. Back then, it was FC Dallas head coach Steve Morrow who got the axe after a particularly humbling 5-1 home defeat to the LA Galaxy. Morrow’s side was in the midst of a month-long winless streak at the time.

The man who replaced Morrow on a permanent basis was Schellas Hyndman, still in the job in this, his sixth season. During his time in charge, Hyndman’s teams have performed admirably in some years and poorly in others. Included among two playoff appearances, including a runner-up finish in the 2010 MLS Cup Final (Rapids, again), Hyndman has a seventh place and a sixth place finish on his resume. Yet he remains in charge in Frisco, entrenched as the guiding force behind the franchise. It might be a matter of loyalty–Hyndman coached HSG chairman Clark Hunt at Southern Methodist University–or because HSG as FC Dallas took the long view.

In 2013, whether through the stability of Hyndman’s presence or the natural cycles of MLS, FC Dallas is the best team in the League through one-third of the season. That’s not quite validation for not firing Hyndman during the lean times, but it does speak to the benefit of consistency at the top.

The Crew’s coaching history is even more stable, considering the direct line from Schmid to Warzycha. Warzycha’s status as a Crew legend-turned-coach gives him a history with the club and the owners that will be tough to discount. Not since the club parted ways with Greg Andrulis in 2005 has the Crew shown the stomach for a mid-season switch on the bench. Warzycha took over on an interim basis before Schmid’s arrival the next season, and stayed on as an assistant before rising to the top spot in 2009. All told, Warzycha has been in Crew colors in one role or another for the entirety of their existence–nearly two decades.

The question for both Crew fans and the people responsible for the decision to keep Warzycha or let him go is whether loyalty and stability trump change. There is no obvious replacement, not part of the way into the season, so any switch now would only be for the sake of shaking things up in a bid to revive a faltering campaign. As there’s no guarantee that such a move would result in better play, it would appear as a punitive move. Warzycha has a standard to meet, and if he’s failing to meet it the club has every right to move on.

The Crew sit three points back of Philadelphia for the last playoff spot in the Eastern Conference. At this point in the season that’s hardly a disaster, no matter the scoreless streak and lack of home success. With plenty of season left to turn things around, Warzycha might merit the benefit of the doubt. If he’s flexible enough and can find new ways to utilize the obvious talent at his disposal, Columbus should have no problem competing for a playoff berth. That might just be enough to warrant leaving Warzycha in the job, at least until it’s clear even the playoffs are out of reach.

How crucial to the success or failure of a team is stability? How does a club balance a current run of bad results with the kind of stability needed for a turnaround? How far must the Crew sink – relative to expectations – for Warzycha to lose his job?

Perhaps it’s just circumstance that neither of the Hunt Sports Group-owned franchises have turned over their head coaching spot in the last five years, and not an overriding philosophy of fostering stability. Both Hyndman and Warzycha had good years at the helm, leading their teams to some regular season or playoff success. Changing coaches, especially in MLS where the coaching ranks are shallow to begin with, might not be on the table.

Dissatisfied Crew fans shouldn’t hold their breath. Since the dismissal of Steve Morrow, HSG has lived through some terrible seasons with each of its clubs under the direction of the men who still hold the jobs of head coach. There’s no reason to think they change that approach.