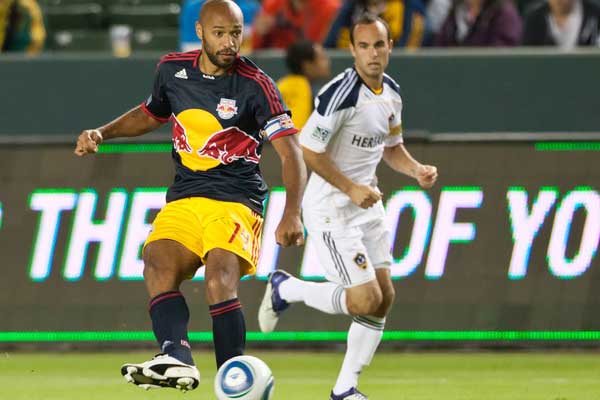 By Clemente Lisi – NEW YORK, NY (May 17, 2013) US Soccer Players – New York versus Los Angeles is the dream matchup everyone from Major League Soccer executives down to the casual fan have wanted to see take place at an MLS Cup final since the very beginning. It’s the marquee market meeting in American sports, and soccer is no exception. That the teams have grown into the two most expensive squads in MLS in recent years, along with a noticeable animosity toward each other, only helps.

As expected given their championships, the past few years have been about Los Angeles. Though the two-time MLS champions may be the ones with the silverware, the Red Bulls are the ones with all the momentum going into Sunday’s game.

There has been a role reversal between the teams over the past few weeks. The Red Bulls are riding high and in first place in the Eastern Conference thanks to a five-game unbeaten streak. The wins have moved the Red Bulls to 21 points in what has been a crowded field of contenders in the East that includes Houston, Kansas City and Montreal.

Rookie coach Mike Petke has done all the right things after a rocky start. His hope is to continue in this direction and that his side hasn’t peaked too early. Remember, winning streaks in May mean very little if you don’t make the playoffs and win games in the fall – just like the Galaxy did in 2012.

Los Angeles, on the other hand, has underperformed. While the Red Bulls have gone 4-0-1 in the last five, the Galaxy went 3-2-0 (a record held respectable by Wednesday’s 4-1 road win against Philadelphia.) Add to that the strength of the Western Conference and the Galaxy’s 17 points is good enough for third place. The loss last weekend against Vancouver hurt. It was the first time this season where the team scored and didn’t come away with at least a point. That’s because the Galaxy have a tough defense and an equally prolific offense. Sure, they miss David Beckham in the middle, but the team still has Landon Donovan, Juninho, Mike Magee and Robbie Keane. Of course, a star-studded lineup doesn’t guarantee results. Ironically, just take a look at the Red Bulls over the past few seasons and you can see why.

Ahead of the clash at Red Bull Arena, there are a few areas where roles reverse, notably when it comes to coaching and grading the designated players.

Petke shows immense maturity as a coach. Despite the absence of a few players, the former defender has made the best of what he has – not all Red Bull coaches of the past can claim the same – and in the process amassed points. For the first time in maybe ever, Red Bull fans and the team’s coach have a mutual respect for one other.

A fan favorite in his playing days, Petke puts his heart and passion into every decision. He may not be perfect, but he’s close – at least from a fan point of view – and that has helped build positive energy around the squad during home games.

After a rough start, Petke did a good job shoring up his backline. He even said recently that having some depth has certainly helped because the “competition going on at certain positions made guys elevate their game.”

That philosophy and style is not so different from what a veteran like Bruce Arena does with his teams. The Hall of Fame coach has been there, done that at the college, MLS and World Cup levels. There isn’t a hole big enough that he can’t get out of. Last season he guided a Galaxy team left for dead at the end of the regular season. Instead, the team pulled together during the playoffs and won another MLS Cup in the process. Arena is a fighter and master motivator. For now, he remains cautiously optimistic – at least when it comes to his public comments.

On the field, this matchup is, as usual, a battle of superstars. Thierry Henry and Tim Cahill are having a strong go at it. The duo have combined for eight goals, are responsible for taking the majority of shots on goal, and are playing like they were in their Premiership days. Despite that excellent synergy, all eyes will be on LA forward Landon Donovan.

Donovan was the difference in Philadelphia, showing a progression in his return to form. Robbie Keane also rejoined the lineup against the Union, recording a goal and an assist. Keane had missed six of the team’s previous seven matches. His absence was a huge blow to the Galaxy. Without Keane, the team lost its aggressiveness. As long as Donovan and Keane can stay healthy and in the starting lineup together, LA has a cutting edge unique in MLS.

By his own admission, Donovan knows he still has some work to do. “I think I’m really close to being back to my normal self,” Donovan told the Galaxy All-Access Podcast ahead of the Union game. “The physical part I’m sort of over the hump. Technically, with the ball, I’m sort of over the hump, where everything is kind of coming naturally again. I think what I’m lacking a little bit is that final confidence, making the best decision all the time. When I’m at my best, I’m consistently making the right decision on every pass, every play. That’s still falling a little bit behind. Once all that sort of falls into place, then I can get back to actually being a better leader and helping others. Right now I’m still focused on myself because I’m not quite there so once I get that part right I can start helping others and making the team better, and I think that’s better for all of us.”

Of course, it is better for the Galaxy if Donovan is at the top of his game. Until then, it’s the Red Bulls who are flying high. If Petke, Henry and Cahill continue to perform at their current levels, New York (and not L.A.) will be lifting MLS Cup in five months time. Should that occur, it truly would be a role reversal.