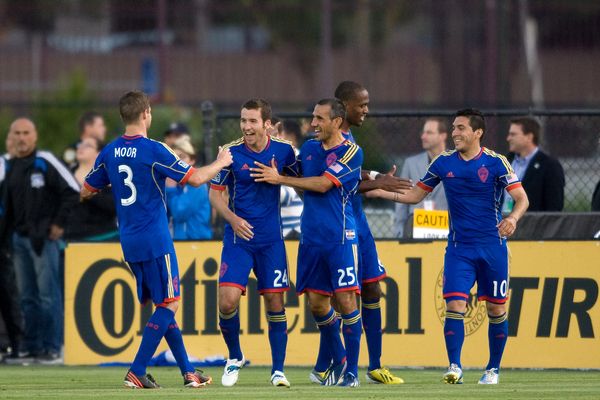 By Jason Davis – WASHINGTON, DC (May 22, 2013) US Soccer Players – The shaking out of the standings through Week 12 of the Major League Soccer season leaves more questions than answers. The few absolutes we have – the Galaxy are pretty good, the Sounders aren’t as bad as they appeared, New York has talent – are bracketed by uncertainty about a number of teams lurking just around the line delineating who makes the playoffs and who does not.

One of those teams is the Colorado Rapids. Currently in 5th-place in the competitive Western Conference, the Rapids are equal parts surprising effectiveness and curious enigma. Talented enough under head coach Oscar Pareja to be a dangerous test for any team, the Rapids have suffered through a debilitating injury epidemic that makes just how good they can be a mystery. Whether by design or circumstance into duty, Pareja relied on youth and role players to navigate the early part of the MLS season.

Despite their place in the standings (in the playoffs if the season ended today – that old gag), the Rapids are actually sixth in the West when it comes to points-per-game. The Sounders, who were in last place as recently as two weeks ago, have just one fewer point with two fewer games played. If the season ended today without Seattle having a chance to jump over the Rapids (and others), it would be unfair.

Watching the Rapids play, one can see the potential. Pareja’s influence is obvious in a style of play that is a far cry from the rough-and-tumble days of Gary Smith and the 2010 MLS Cup championship side. With a changing of the guard across so many positions, Pareja has re-molded the Rapids in something less reliant on a two-headed monster up top (formerly Conor Casey and Omar Cummings) and a double-whammy combo in midfield (Jeff Larentowicz and Pablo Mastroeni). Given the team’s 7th-place finish last season and the turnover in the roster in Pareja’s second year, it’s clear he has the mandate to change the Rapids in ways that might not result in immediate success.

As they sit, the Rapids are in either a perfect position to climb the ladder and return to the playoffs or crash back down and miss out for another year. Several teams behind Colorado are “underachieving” – at least according to standards set last season – and could regain their form and jump over the Rapids. Colorado’s challenge looks daunting in the face of the number of strong teams in the West. Whatever the struggles of the Sounders, Earthquakes, and Whitecaps, it would not be surprising to see one or more of those teams find a rich vein of form and push their way up the standings. If the Rapids are going to hang on to their place, or improve it as they surely want to do, they’ll need to do better.

First and foremost, the Rapids need goals. Despite their standing, the Rapids have the fewest number of goals in the conference at 11. That number directly relates to their injury crisis. New acquisition Edson Buddle and second year attacker Tony Cascio missed significant time during the start of the season. The cast of players forced to carry the slack highlight the roster disparity that all MLS teams struggle with. Atiba Harris, an adequate at best MLS striker who has never scored more than four goals in any of his seven seasons, rookie DeShorn Brown, a talented, but raw, young player still learning the pro game, Danny Mwanga, former number one pick of the Union-turned reclamation project, and Kamani Hill, a journeyman forward doing only the bare minimum in their stead.

The light at the end of the burgundy tunnel is that the injury crisis can’t be much worse than it was. Pareja has enough of his team healthy to begin to form a first choice side, something he has not yet been able to do to this point. He should be able to rotate out some of the younger players, giving them a much-needed break in light of heavy minutes. If Buddle can find even some of his old LA Galaxy effectiveness, more goals will come. Rather than hope week-to-week to just cobble together a lineup that can compete, Pareja can enact whatever plan was in place before the rampant injury bug forced him to merely survive.

That the Rapids did survive to this point, earning a respectable 1.33 points-per-game considering the number of key players missing in action, sets them up to be contenders for a playoff spot through the remaining two-thirds of the season. That is, of course, if their own efforts to get better aren’t eclipsed by the improvement of the clubs immediately around them. The Rapids recovery won’t take place in a vacuum, and there are only so many points up for grabs in the hotly contested Western Conference. Colorado absolutely must take points from their nearest rivals in the West – in addition to maximizing any opportunity to collect points against Eastern Conference teams – if they’re to stay above the playoff line.

It’s the Rapids misfortune that the teams that have struggled thus far have high ceiling they’re still capable of reaching. It’s the Rapids luck that their own ceiling might be much higher than originally thought, unfocused as it was through the injury problems of early season. As those issues resolve themselves, Oscar Pareja’s task is to settle a team that is too used to coping with flux to know itself what it is capable of doing.

This is a critical time in the 2013 Colorado Rapids season. Get it right, with a healthier squad now available and several rookie contributors proven up to the task, and they could surprise. Get it wrong, or suffer another spate of injuries that puts the brakes on any forward momentum, and they’ll drift back down to the bottom end of the standings.