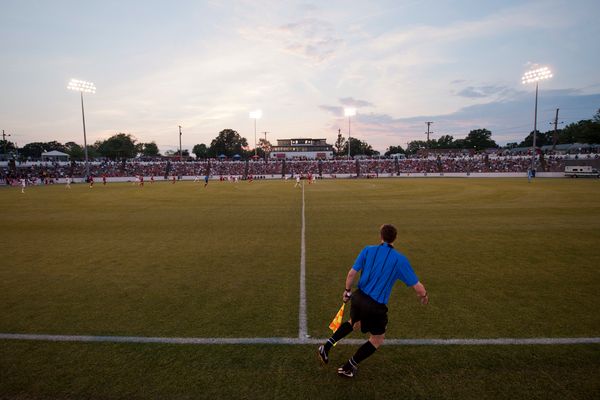 By Jason Davis – WASHINGTON, DC (May 30, 2013) US Soccer Players – Just call the third round of the US Open Cup “Upset Watch 2013.” As the biggest boys on the block enter the competition, all eyes turn towards the possibility of a lower division side taking out their Major League Soccer opponent. Maybe it’s the “magic of the Cup”, maybe it’s the lack of interest on the part of some MLS teams, maybe it’s underrated quality of those second- and third-division teams… whatever makes for US Open Cup upsets, there are bound to be a few every year.

The third round of the Cup came and went, leaving four MLS sides to deal with the shame of waiting until next year. There’s some ignominy in losing at this point for MLS teams, though the sting of disappointment ends quickly when the schedule brings another league game.

DC United managed to survive to play another round in the Open Cup thanks to a win over the Richmond Kickers on penalties. After 120 minutes of soccer, the game was scoreless, a testament to the struggles of United across all of their games. They hit the post, they missed easy chances, but in the end they came out on top. Perhaps the question now is whether or not Ben Olsen’s men can use a win like that to springboard themselves to better MLS form. Logically speaking, a Cup run of any type is just the kind of thing that should boost the flagging morale of a poorly playing team, helping them to get a win here or there as they try to climb up the league ladder.

That’s certainly the prevailing narrative in England, where the FA Cup’s relative importance makes it a trophy worth winning even as the biggest clubs play their reserves in the early rounds. Lesser teams, particularly those fighting relegation, sometimes benefit from the confidence gained by progressing through successive rounds of the tournament. No such connection exists in the United States, in part because the US Open Cup has long been an afterthought for nearly all of the country’s topflight teams. Previous incarnations of the tournament that required MLS teams to play off against one another created even less incentive to push for the trophy, with coaches opting to rest their starters rather than risk potential injury.

On the other side of that coin is the deflating nature of being upset. If Colorado or San Jose spiral downward in league play, we might soon look back on their Open Cup defeats as a factor. Losing begets losing, or so the saying goes. Of course, no one would expect LA or Seattle to put too much focus on their Open Cup losses, no matter the relative shock. The Galaxy will continue to be favorites in the West, and the revived Sounders remain talented enough to overcome their poor start and make the playoffs by the time October rolls around. The difference lies in just how hard each team takes their ouster.

If the 100th edition of the US Open Cup feels a little different than most previous editions, it’s because of a number of factors coinciding. There are two relatively strong divisions of professional soccer below MLS anxious to prove themselves against MLS teams. The spot in the CONCACAF Champions League that goes to the winner of the tournament provides incentive beyond just winning a trophy and collecting the prize money.

In recent years, clubs like Seattle and Sporting Kansas City identified that value, pushing the whole of the league to take the tournament more seriously. Additional depth for MLS clubs, gained through academy signings and larger rosters, means the quality of the teams put out even by those MLS teams that refuse to risk their biggest names is higher than ever before. Where once an upset in the Cup was something of a humdrum occurrence because no one seemed to care, it’s now something worth noting, and if one is of the mind, celebrating. That’s true despite the new no-bid hosting rule, which prevents MLS teams from simply paying US Soccer for the right to play their Open Cup matches at home.

Cross-country travel helps level the playing field. In some cases, for those teams not inclined to go for it anyway (hello, LA), it provides a ready excuse for the status quo.

Not everyone is on board with prioritizing the Open Cup in a meaningful way, but enough have come around that the tournament is rapidly gaining in importance. Even if the LA Galaxys of the world choose to invest little into their campaign – citing complaints of travel and schedule congestion, as is Bruce Arena’s usual stance – there’s enough interest from other teams hopes to push the Open Cup up a small step in relevance. It helps that fans, ever more committed to their teams and anxious to win no matter what trophy is up for grabs, take it upon themselves to demand access to the games and accountability on the field.

Still, the Open Cup remains something of a half-important, half-dismissed competition. The seriousness with which it’s taken a function of who’s involved, where they’re playing, and the resources needed to get through the early rounds change from club-to-club. Like in so many other places, including England, the effort put forth to win the Cup rises the deeper in the tournament the MLS teams go.

Bruce Arena and the Galaxy won’t be losing any sleep over their upset defeat at the hands of the RailHawks last night in Cary. Some things will take longer to change than others. But the Sounders, the standard-bearer for taking this tournament and its rewards seriously, have to wonder what happened with their earliest exit from the tournament since their pre-MLS days back in 2006. Somewhere between those two is the truth about the new relevance of a tournament that was so widely disrespected it had nowhere to go but up. Which it has in its 100th year, even if just by a little.