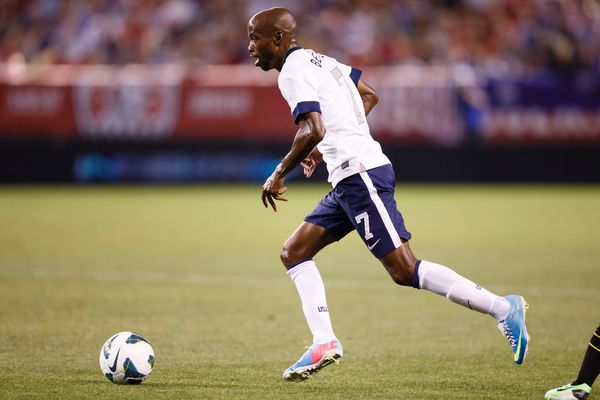 On his overall thoughts on the match:
“Obviously a negative result, but I think an important game because it gets us right in our toes now. We know where players are, and we had to jump start these three and a half weeks, having guys come in on Sunday and Monday and throw them into a game right away. There’s a lot we can learn from these opponents. This is why we play teams like Belgium, like Germany, like Russia or like Italy because there’s so much that you can read from those games. Obviously you want to win them and when you lose them it’s not such a big pleasure, but I’d rather play Belgium 10 more times than El Salvador 100 times because that’s where you learn. Therefore, we take the defeat and go to Washington and get more into a flow and more into a rhythm. We will get the rest of our players in – we’re still missing five or six guys – and we’ll make sure we do a better job on Sunday against Germany.”

On he is worried that losing games like this will hurt the team’s heading into the World Cup Qualifiers:

“Not at all. Those are games that you need to play. There is no player that is going to have sleepless nights over the next couple days. They understand that when they make mistakes they pay for it in a defeat. I don’t think that confidence comes into play there. They understand why certain things happen and then you can correct it. Every day’s work on the training field going through certain elements and principles that help us build toward Jamaica. That is what we are working towards. We want to make sure there is a better flow and a better understanding on the field and better communication for when the games come that we badly need to win. There is no problem with confidence.”

On what he learned today about the competition at center back:
“We want to watch the game first. We want to see how all the goals developed and what mistakes were made because there’s always a series of mistakes leading to goals. We’ll want to analyze that and then we’ll have a better judgment, but I think it’s clear when you have players like Benteke, Lukaku, and Fellaini, the attacking players that have that vision on the field and think two steps ahead, that is the thought process that is so important for our players to learn. I think for them it was really important to see. I won’t go into details now because obviously we want to watch the game and see from the first goal on what was going wrong there.”

On DaMarcus Beasley earning his 100th cap:
“He had a good game. He is so simple in preparing for his job. He knows that his role is to keep his side clean and go forward when there’s an opportunity and to help the guys whenever he can. His energy and his positive approach to it, no matter if you’re 4-1 down, he’s still going. He’s still confident, he still wants to make something happen. Even if it’s in defeat, he still played a very good 100th cap.”

On playing Germany next:

We want to give them a good game. We are obviously thrilled that it’s our centennial. There’s a lot of history at RFK Stadium, which has a lot of tradition for the National Team. It’s going to be a packed house, so we want to do well. We have four more days now to keep working and get more into a flow, have them settle in and also get the other guys joining us. We want to do much better than we did tonight.

“For me, it’s a very nice thing to see my old staff. I built that staff and it’s still exactly the same. At the same time, we have two different missions. They just want to have an end of the season tour, and we want to prepare sharply and precisely for Jamaica. This is our job. We want to go into Jamaica and get points, and then also obviously pick up wins at home. That’s what our focus is, but we will definitely enjoy the game in D.C.”

On both goals coming from set pieces and creating better chances in the run of play:
“We talked about that before the game. We want to try to play simpler out of the back. Here and there we always look for the complicated ball into Jozy, into Eddie Johnson, and into Clint instead of just carrying it through the midfield, just playing it to people’s feet,  moving off the ball and keeping it simple. We made it a little too difficult for ourselves there, and if we do that than people get insecure and the passing gets insecure. We were aware of the strengths of Belgium, their short passing abilities, players that are really good on the ball, and they make you run. What we didn’t do well was playing through, keep it simple, give options to each other, pass the ball around and don’t look for the killer ball right away. We lost far too many balls too early, too easy.”

On the crowd in Cleveland:

The experience was wonderful. It was a great crowd, and they were really supportive. It was great that we came to Cleveland.

On the loss:
“It was tough obviously. I don’t want to talk about personal things, but we didn’t get the result that we wanted. It’s disappointing. At the end of the day it’s a friendly, but these are games you want to play in. Belgium is a very good team, you guys saw the same. They have a lot of good attacking players and individual players. We didn’t do enough to get more goals, but at the same time I thought our offense looked a little better tonight. We created more chances than usual and we can take positives from that.”

On playing in front of family and friends:
“Yeah I had about 19 of them today in the stands so it was good to have them there. Like I said, I always love the continued support that they’ve given me over my career so I’m definitely glad I got to share it with them today.”

On playing two top teams before World Cup qualifying:
“It’s great, it’s great. Like I said, as players we want to play these types of games, we want to test ourselves against the best in the world and we have no fear going into these games. Obviously we want the result to go our way more times than not, but today they had more than we did. That’s the way it goes sometimes, the way the cookie crumbles, but we can look at the tape and look at our positives and our weaknesses and our negatives and learn from it and get ready for game against Germany.”

On balancing the team performance and individual performance:
“It leaves a bit of a sour taste in your mouth knowing your coming into a game where your team is already down 4-1 at that point. I think you try and get out if it what you can personally, but as a team you look to build on that now and obviously we regroup and look to a big game against Germany on Sunday. The real results will matter when we come up in the qualifiers and hopefully those have a different outcome.”

On seeing the contribution he can make:
“Yeah I believe I’m ready whenever I get called upon. I’m trying to look when I’m on the bench on where I can fit in and where the gaps are and the space that I can find, so obviously that all kind of plays a part when you finally do get out there and try and make an impact.”

On playing for the first time in almost three years for the National Team:
“Great feeling on a personal note just to be back with the National Team. As I said it’s a moment and a thought that had kept me going through my rehab in the sense of walking back out with this group. What it means to be a part of your national team and that feeling collectively was a really special one for me, and something that I’ll treasure and that I won’t forget now as I try to push on and get better.”

On the USMNT style and playing a challenging opponent in Belgium:
“I think that’s the design, to kind of keep challenging ourselves and I think when you challenge yourself at this level you run the risk of doing things you wish you didn’t do a few times. I do I think it is better than playing a team that we can dominate and is kind of a cakewalk for us. I think these games are probably better, and will serve us better in the long run but time will tell.”

On the game being a showcase game and who stood out:
“I thought Sacha [Kljestan] played excellent. For me Sacha was fantastic. He was honest, he was hard working, and he had some good touches. I think his passing was really good, and he has proven over the last three years, being in Belgium, that he has really turned his game up. It’s exciting for us, and he is kind of one of the old guard who knows what this process is about.”

On the defensive performance:
“We obviously at this level we need to tighten up. I think anybody would tell you that. Most of the teams are going to come up with fire power, so it’s on us to put the other team on our terms defensively. We should be dictating that. Our line of confrontation, our pressure on and off the ball, whether our back line drops or steps up, those are all things that dictate the tempo of the game.”

Courtesy of US Soccer Communications