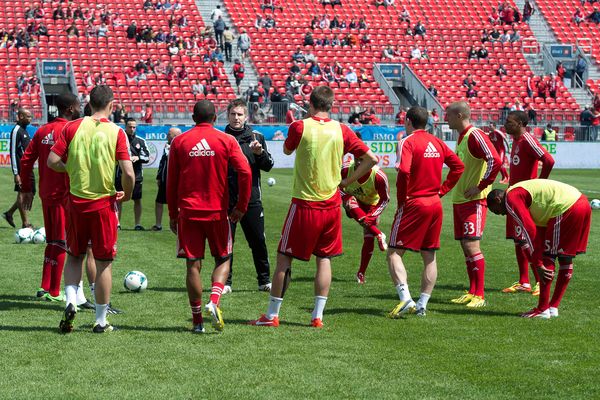 By Jason Davis – WASHINGTON, DC (May 17, 2013) US Soccer Players – Toronto FC hired Kevin Payne away from DC United to bring stability and MLS know-how to one of the League’s most underperforming teams. Despite possessing all of the ingredients – ardent fan base, quality stadium, big money backers – to become one of Major League Soccer’s leading lights, Toronto’s existence has been fraught with missteps and miscalculations.

So far, the jury is more than out on Kevin Payne’s stewardship, they’re flat-out baffled by his approach. Instead of building a team that could compete for a playoff spot, something Toronto fans are so desperate for they’d be willing to stomach almost anything, Payne has cobbled together a nominally talented group of players not quite ready to climb that reasonably sized hill. In other words, it’s par for the course in Ontario.

Instead of “building”, an admittedly subjective concept, Payne and head coach Ryan Nelsen are counting on a series of loans to boost a club mired in their usual position at the foot of the standings. By their temporary nature, loans aren’t building blocks, but short-term shoring for a building that wasn’t well-constructed in the first place. Add in a trade for mercurial winger Bobby Convey, and what TFC has is a team destined to once again disappoint. A team destined to disappoint that is taking on new cargo as it hurtles through the MLS season.

TFC has added five players through loans thus far in 2012, a number only exceeded by Chivas USA (whose loan agreements are entirely with their sister club, CD Guadalajara). The Reds leveraged head coach Ryan Nelsen’s relationship with Harry Redknapp and Queens Park Rangers to bring in winger Hogan Ephraim. They reached out to Spurs to bring in midfielder John Bostock. Then, more than two months into the season with things not going well, Payne and company scooped up two more loanees, Stephen Caldwell from Birmingham City and Jeremy Brockie from Wellington Phoenix of Australia’s A-League. It’s unclear what impact they can make on the club’s immediate fortunes.

At least completed loans, despite their temporary fix nature, bring in a body that can help the cause. Much worse from the perspective of team building was the attempted loan signing by TFC of Tal Ben Haim, another Queens Park Rangers player. The 31-year old defender was all set to add experience, at the very least, to Toronto’s back line when Kevin Payne admitted that Ben Haim might never suit up for TFC. Never mind that the club issued a release announcing the signing. Apparently, Ben Haim received more lucrative offers subsequent to TFC’s release, and the club decided not to stand in his way. Even if that was the right thing to do by the player, it illustrates the fumbling nature of Toronto’s effort to bring in reinforcements.

Oddly, Payne outlines the TC approach as one that will serve the club well in the future. In addition to admitting rushing the Ben Haim signing to meet the transfer deadline, despite the uncertainty of the defender joining the team, Payne explained the rash of loans to reporters on Monday.

“In this instance, these are band-aids that are probably for a year or a year-and-a-half,” he said. “We’re also not going to panic now and make a bunch of sudden moves to try and get better immediately and throw out the plan of getting better for the long term.”

It’s difficult to win with band-aids. In the end, taking the long view might ultimately benefit the club, though that’s unlikely to satisfy fans still waiting to root for a winner after six long years. Moves motivated by panic are bad, but why wouldn’t Toronto want to try and get better immediately? Why are getting better over the long term – presumably in a self-sustaining way – and improving enough to compete for the playoffs in the short term mutually exclusive?

Payne sounds like a man who hopes to sell the fans on the notion of success in the future, promises they’ve heard over and over again since 2007, while getting permission to remain an also-ran for the time being. If this wasn’t MLS, and TFC wasn’t able to compete on a level financial footing with nearly every other team in the League, such a program might make sense. As it is, in this League with Toronto’s resources, choosing long term improvement over the ability to compete in the short term is a cop out.

Mixed messages are part of this story, too, if the trade for Bobby Convey is any indication. Though Toronto gave up little for the former DC United (hence a connection with Payne and Nelse), Reading United, San Jose, and Sporting Kansas City player, he comes with a rather hefty salary. Payne cautions against panic, then executes a trade that smacks of it.

Payne says the loans are “band-aids.” Band-aids imply wounds. Toronto most certainly has some, earned through years of choosing repeatedly choosing the wrong path towards success in a League that is more forgiving than most. We should note that Payne (and Nelsen) inherited a club in desperate need of direction. That gives them some benefit of the doubt in their effort to provide it.

Between a player acquisition policy that provides temporary help that still might not be good enough to make the team a playoff contender and the conflicting statement made by the Convey trade, one can’t help but wonder if TFC fans are in any mood to give it.