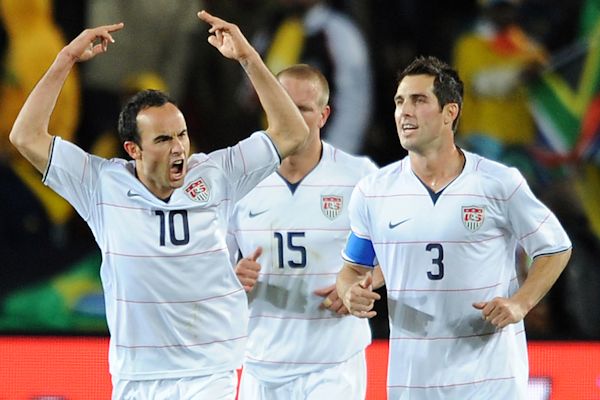 By Clemente Lisi – NEW YORK, NY (June 17, 2013) US Soccer Players – With summer soccer in full swing – and by that I mean trade talk and meaningless friendles – it’s good to be able to enjoy the Confederations Cup over the next few weeks.

It’s a tournament that’s certainly worth our attention. Although it’s not as important a competition FIFA would like us to believe it is, the tournament does serve a purpose for the hosts in terms of planning and logistics and helps all of us get a glimpse of how some of the best National Teams in the world are doing 12 months before the World Cup.

The 2013 edition kicked off over the weekend. What some don’t know is that the tournament dates back to 1992 when Saudi Arabia organized the King Fahd Cup or Intercontinental Champions Cup. FIFA took over the tournament in 1997 and rebranded it the Confederations Cup. The tournament is now in its 9th edition.

Below is a look at the tournament’s history – by the numbers, of course – and how teams and players have fared. As the numbers reveal, the United States has been a protagonist, in good and bad ways, over the years.

The stat: The total goals scored in Brazil’s 8-2 win over Saudi Arabia in the semifinals of the 1999 edition.

The story: The semifinals featured a Brazil squad laden with the likes of Dida and Ronaldinho against Saudi Arabia on August 1 at the Estadio Jalisco in Guadalajara before a crowd of 48,000. In the end, Ronaldinho netted a hat trick as Brazil reached the final only to lose to hosts Mexico. Ronaldinho, along with Mexico’s Chaitemoc Blanc, remains the tournaments all-time leading scorers with nine goals.

The stat: The number of matches that have ended scoreless, including USA-Cameroon in 2003.

The story: In 2003, the United States participated in the tournament as a result of winning the 2002 Gold Cup. The game against Cameroon in Lyon on June 23 saw the USA go into its final group game 0-2 and in need of a win in order to put a respectable finish on the tournament. The game featured few scoring chances as a young Tim Howard recorded three saves. The US defense – which featured Cory Gibbs, Carlos Bocanegra, Danny Califf and Steve Cherundolo – averaged just 23.5 years of age. Two of those four players would go on to be regulars in the lineup. Chris Armas, who wore the captain’s armband, earned his 50th cap that night.

The stat: The number of games Landon Donovan has played at the tournament.

The story: Some of Donovan’s best games for the USA have been at the Confederations Cup. His best game – 45 minutes of it to be exact – came in the 2009 final when the United States led Brazil 2-0 at halftime, only to lose 3-2.

The stat: The number of times Brazil has played at the tournament.

The story: Brazil has appeared in all but two editions of the Confederations Cup. Winners of three tournaments, including the last one in 2009, Brazil hosts this year and are again favorites to win. This past Saturday’s 3-0 win over Japan was a good start.

The stat: The number of wins the USA has recorded overall. The United States is 6-8-1 over 15 matches.

The story: Some of the most memorable wins came in the 2009 edition. A 3-0 victory over Egypt on June 21 in the final group game (coupled by Brazil’s 3-0 win over Italy) landed the Americans in the semifinals. Four days later, the Americans outdid themselves, downing Spain 2-0 on goals from Jozy Altidore and Clint Dempsey.

The stat: The number of editions Mexico has participated in.

The story: Mexico has actually fared fairly well at this tournament. Playing at home in 1999, Mexico won the tournament, defeating Saudi Arabia, Bolivia, USA and Brazil (in the final) at the Estadio Azteca before 110,000 rabid fans.

The story: Although ’09 was the year the USA came close to winning the trophy, the team reached the semifinals 10 years earlier. Memorable wins included a 2-0 victory over Germany. The Americans snagged third-place following a 2-0 victory over Saudi Arabia on goal from Paul Bravo and Brian McBride.

The stat: The number of cards (both yellow and red) that the Czech Republic has averaged at this tournament. The Czechs lead the all-time list of averages with an astounding 13 yellows and 1 red over just 5 games.

The story: In 1997, the Czech Republic’s Jiri Nemec received two yellow cards in a 2-2 draw against South Africa. At the same tournament, Karel Poborsky was red-carded in the 40th minute in a 2-1 loss to Uruguay.

The stat: The number of times Japan won the Fair Play Award.

The story: Unlike the Czechs, Japan has a very clean record. In fact, only one Japanese player has ever been red-carded (Takayuki Suzuki in 2001 against Australia). The Japanese won the Fair Play Award in 2001 and 2003.

The stat: Games that ended with the scoring of a Golden Goal. France’s 1-0 win over Cameroon in 2003 remains the only one when Thierry Henry netted the winner seven minutes into extra time to win the tournament.

The story: FIFA introduced sudden death overtime – as we Americans call it – in an effort to get teams to avoid going to a penalty shootout. Stimulating offense was the objective when FIFA introduced it in 1993. By 2004, FIFA scrapped it.