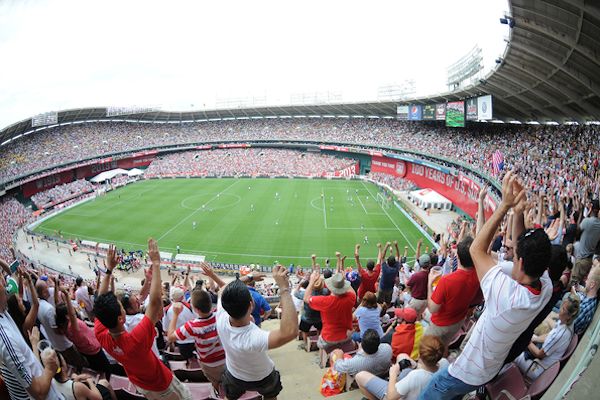 By Jason Davis – WASHINGTON, DC (Jun 5, 2013) US Soccer Players – No building has played host to the United States National Team more often than RFK Stadium. By simple logic, no building has seen more goals, more drama, or more surprises than the outdate edifice the looms over the confluence of the Anacostia and Potomac Rivers in Washington, DC.

On Sunday, RFK Stadium was the site of US Soccer’s centennial celebration, marking 100 years of the organization’s stewardship of soccer in the United States. The building filled to its veritable brim for a match set up to mark the occasion, a friendly between the USA and Germany. It was the first time some of the far upper reaches of the stands had fulfilled their purpose as seating for a sporting event in nearly two years. The last time RFK was that full, the National Team beat Jamaica in a 2011 Gold Cup quarterfinal match.

At this point in the useable lifespan of RFK Stadium – and one might get differing opinion on whether or not the building is, in fact, still “useable” – it’s not out of the realm of possibility that the USA – Germany match was its last marquee hurrah. Whether or not US Soccer will return to the building for another national team game (for either the men or the women) that could sell out is an open question. The stadium didn’t make the list as a Gold Cup venue for the 2013 edition after hosting games in 2009 and 2011. RFK remains home to DC United of MLS, though everyone involved is anxious to end that marriage and move on to a more appropriate, modern home.

Preferably one with amenities. Or, most aptly, basic features like pipes that don’t leak, facades that don’t crumble, and a capacity more suited for a club team. United will never fill up the building on its own, not anymore, at least not without another appearance by someone as transcendent as David Beckham (Beckham made his MLS debut at RFK in August of 2007 in front of 46,686 fans). If and when a new building is secured for DC United (in Washington or otherwise), RFK will cease to have a regular use altogether.

That day is both too far off and too soon, all at the same time. Nostalgia makes the notion of saying goodbye a maudlin. The reality of RFK’s condition makes it necessary and inevitable.

That RFK’s fit for soccer is imperfect needs no revisiting. One of the last remaining multi-use stadiums still standing from an era when multi-use stadiums were the going style, the building’s quality as a soccer venue barely rises above “mediocre” even when filled to its modern day capacity. Short of imagining that the players aren’t appearing out of baseball dugouts last used when the Nationals called RFK home, or that there aren’t large empty spaces reaching into the corners behind each goal created by the post-baseball setup, there’s no getting around how uncomfortable everything seems. It’s not just soccer in a football stadium, which American soccer fans have long stomached, or soccer in a baseball stadium, more ridiculous, but less dreary. It’s soccer in a building never designed for soccer that would already be condemned or demolished if it weren’t for soccer. As marriages of conveniences go, it’s among the saddest on record.

RFK Stadium certainly serves as a repository of happy memories for American soccer fans. Even beyond United’s 17-plus years there, more than few replete with playoff success and championship triumphs, there’s the international soccer to consider. Washington built its reputation as one of the country’s best soccer cities on the back of the crowds that showed up at RFK Stadium. Not just for National Team games, or MLS, but for games between visiting nations with large immigrant communities that invariably squeezed into RFK to raucously support their homelands.

For the United States, there will always be the 4-0 blowout of Mexico in the 1995 US Cup, the friendly win over Argentina in 1999, and the comeback against Costa Rica to sew up top spot in the Hex ten years later. RFK wasn’t full that October night, but it nevertheless rocked on its ancient foundation when Jonathan Bornstein’s 95th minute goal leveled the score and gave the United States bragging rights as the top CONCACAF qualifier for World Cup 2010. That night was thick with emotion, as it came only days after Charlie Davies’ injury in a horrific car accident. A fan-created tribute to Davies, in which thousands of fans held up his number “9” in the ninth minute of the game, remains one of the most iconic moments of community in the team’s history.

No one knows how long RFK Stadium will last. Depending on DC United’s ultimate fate, the 52-year old stadium might last another five years, or with a miracle/disaster, another ten. RFK has already seen its last professional baseball game and its last professional football game. At some point, it will see its last soccer game and finally fall into the complete disuse many expected to have already come. While DC United isn’t going anywhere, for now, RFK’s lifespan as a prominent venue for big games would figure to come to an end even sooner, as other options sprinkled across a vast nation offer better environments for top level soccer.

All of the memories will remain and the games will always exist in the pages of US Soccer history, even when the ugly round hole to soccer’s square peg is razed to the ground in a future that seems perpetually imminent. If Sunday’s win over Germany was in fact the last stand of RFK Stadium as a home venue for America’s team in the nation’s capital, it was a fine way to close the book. If Sunday was the last time RFK Stadium will see paying sports fans inhabit its highest elevations for a few hours, let it be remembered that it was American soccer that brought it about.

RFK is a terrible soccer stadium. It is also one of the best stadiums the US National Team has ever had.