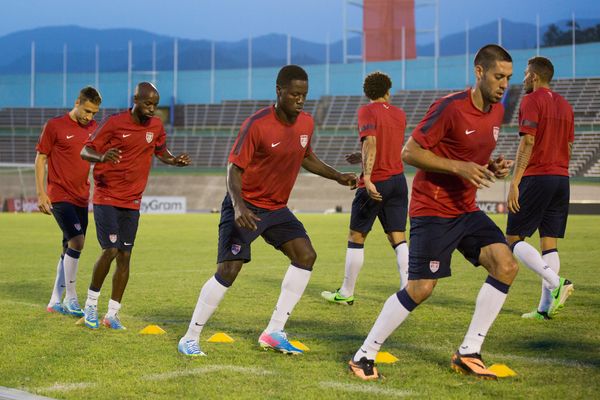 By Jason Davis – WASHINGTON, DC (Jun 7, 2013) US Soccer Players – They call it “The Office.” Built in 1962, Jamaica’s National Stadium is home to the country’s national soccer team and a mecca for world-class track and field that dominates sports in the region. Officially, it’s Independence Stadium. Unofficially, it’s where the affectionately named Reggae Boyz “go to work.”

The 35,000 fans that fill the building each time the national team hosts a regional rival in World Cup qualifying are as boisterous and partisan as any group of fans in CONCACAF. Despite the track around the field, Jamaican fans impress themselves on the game in impressive ways, pushing on their beloved team with their infectious energy.

When the Reggae Boyz beat the United States at The Office last September, it was the first time they’d managed to beat against the USA in World Cup Qualifying. In qualifying matches prior to the September defeat, the Americans drew every time they traveled to Kingston. For as long as the Americans have been playing the Jamaicans in the sport, US trips to the island had always ended with the visitors escaping with a point. It was never a win, but it was also never a loss. Losing in Jamaica signaled that perhaps this specific version of the US team wasn’t as capable of dealing with the unique elements of the trip as teams that came before.

No matter their confidence coming in, issues with injuries, or whatever else might make a trip to Jamaica just that little bit tougher, the Americans always managed to play to equal terms with the hosts. They never won in Jamaica in qualifying, but as long as they left the island with a point in hand, the away date was a success. US National Team coach Jurgen Klinsmann’s team broke new, troubling, ground when they fell last September. New ground for the United States that is. The other CONCACAF power, Mexico, had already felt the sting of a loss in Kingston.

The trip to Jamaica is difficult, for Mexico, the US, or anyone else. The region’s longstanding top-heavy nature can’t mitigate the home field advantage of far-flung locales with their raucous crowds and steamy temperatures. The Office might not be the most outwardly daunting of the region’s notorious stadiums, but it undoubtedly helps level the playing field when Jamaica takes on a more talented opponent. The Jamaican fans lack the dangerous edge of their contemporaries in Honduras, Costa Rica, and El Salvador, but that doesn’t mean their contributions aren’t considerable. It doesn’t take the throwing of projectiles to impact the outcome of a game.

Mexico left Kingston on Tuesday night with a hard-fought 1-0 win. Over the course of 90 minutes, the Jamaicans slowed down the potent Mexican attack enough to give themselves a chance to pull out a result. In the end, one quality header from Aldo De Nigris was enough to beat Jamaica. But outside of that taken chance, and a few created by Mexico as a result of Jamaica’s push for the equalizer, the talent disparity all but melted away in the heat of the Caribbean. The difference wasn’t Mexico’s superior technical ability, better passing, or dominant possession. The difference was one moment of slack defending on the part of Jamaica and the brilliant play of Mexican goalkeeper Jose de Jesus Corona. The Reggae Boyz either missed excellent chances, or Corona saved them.

The win on Tuesday was Mexico’s third in six qualifiers in Kingston. The last time El Tri visited The Office for qualifying back in 2008, Jamaica came out on top with a 1-0 victory. The disparity between Mexico’s aggregate score against the Reggae Boyz at home in World Cup qualifying versus on the road illustrates the advantage Jamaica gets on their patch of Caribbean soil. In six matches in Mexico between the two nations, Mexico scored 23 goals; in the six matches in Kingston, they scored six. Even accounting for the home advantage Mexico possesses at Estadio Azteca, the swing in competition between the two sides is dramatic.

Jamaica, like so many other small nations in CONCACAF and beyond, are a different team at home on the island.

Mexico’s relative struggles in Kingston put the American efforts there in perspective. The Office is no pushover. A win on Jamaican soil tonight would be the first victory for the Americans there in World Cup qualifying, going all the way back to 1988. No matter the level of the Jamaican program in any given cycle, they rarely fail to get up for the region’s best teams, the United States included. Mexico once again first hand on Tuesday. It would be no surprise to see Jamaica put up a fight and push the U.S. to the limit of their abilities in the uncomfortable environment of Independence Stadium.

Jurgen Klinsmann brings in an American side anxious to erase last year’s loss in Kingston and high on the confidence of a strong performance against Germany on Sunday. No matter what psychology is at play, it seems extremely likely that the game with be tight throughout. The history in Kingston all but ensures it.