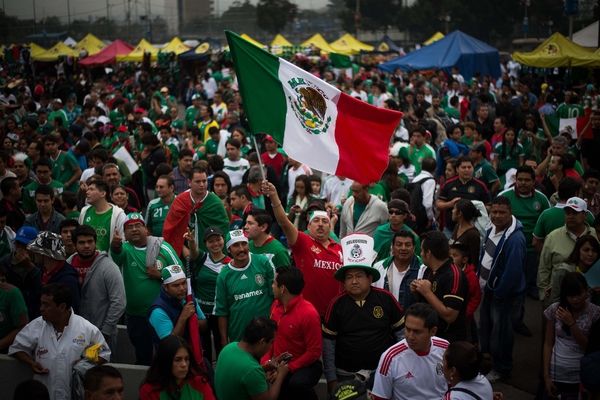 By Clemente Lisi – NEW YORK, NY (June 24, 2013) US Soccer Players – Mexico is a team in despair. Nothing is going their way these days. To say that they are in a slump is generous. The Confederations Cup was a disaster for El Tri. Period. The team finished third in its group and had been officially eliminated heading into its third group match Saturday against Japan.

Despite closing the tournament with a 2-1 victory against the Asian champions, the fluid passing, the tight defense and the strength on the wings seem to have evaporated. What we witnessed in Brazil over the past week was nothing short of a poor effort. Simply put, this is a squad that’s lost its groove.

Those two paragraphs read very much like Mexico’s obituary. In a way, they are. And until the team doesn’t string together some wins and shows us all some inspiring play, Mexico’s strength as a regional power will be further diminished.

First, it was Italy who blew past Mexico 2-1 in a game that featured a highlight-reel free kick goal by midfielder Andrea Pirlo that left El Tri’s defense stunned. Then it was Brazil who knocked Mexico out of the tournament with a 2-0 win that was as easy and comfortable as the score line suggests. While Neymar got all the attention for his goal and fancy footwork, US fans must have been wondering – and some gleefully – that Mexico just isn’t the team it was a decade, or even three years, ago. On Saturday, while most of us were riveted by the Brazil-Italy match, those of us in North America who follow Mexico closely were interested in how El Tri would do against Japan.

What we saw was a better performance (and two goals by Javier “Chicarito” Hernandez), although it was only the team’s second win in 14 games this year. Two goals in one game were better than the two goals the team had scored in the previous five. Nonetheless, Mexico enters the Gold Cup – and, more importantly, World Cup Qualifying – with a dark cloud hanging over it. Chicarito has been erratic as of late. Although he scored twice (and also missed a PK) against Japan, he only had 15 touches against Brazil, the fewest of any starter.

“We’re on track. The main objective is qualification for the World Cup,” Mexico coach Jose Manuel “Chepo” de la Torre reassured reporters – and his countrymen back home – during a news conference following the Brazil loss. “In (the Confederations Cup), we didn’t manage it. That’s how it is.”

De la Torre knows that not getting results over the next few months will mean the loss of his job. Not making Brazil ’14 would be a disaster, especially after the Mexicans reached the finals of ever World Cup since USA ‘94.

Less than a year ago, Mexico was on top of the world. Its under-23 team had won the Olympic gold medal (shocking favorites Brazil in the final no less) and the future really seemed bright. Ten months later, some of those same gold medalists have flopped at the senior level. Eight Mexicans from this Confederations Cup squad were on that Olympic team, including veteran midfielder Giovani dos Santos.

In his pre-game analysis of the Mexico-Japan game on ESPN, former US defender Alexi Lalas, no stranger to games against Mexico during his playing days, said El Tri had recently suffered a “lack of confidence.” When it came to expectations, the team’s young players had “not lived up to it or embraced it.”

That is one way of explaining what has happened to this Mexican team. The team generally lacked chemistry and it was evident in Brazil. Historically, El Tri has gone through some massive slumps before (including 2001 and 2009) and always come up ahead. In both those years, Mexico ultimately qualified for the World Cup finals, even when the situation looked to be in despair. This time, however, Mexico could find itself the odd team out – especially since the USA has now solidified itself as the region’s dominant team.

Mexicans woke up Sunday to the headline “A Farewell with a Victory” in the daily La Prensa. It was a positive morning after a week in which the Mexican media reported that the players had broken curfew to party in Ipanema Beach after the loss to Italy last weekend. Although the team denied those reports, their poor form on the field did little to quell the news stories.

For US fans, how Mexico fares in international competitions is a dilemma. As MLSSoccer’s Greg Lalas pointed out on the eve of the Confederations Cup, Mexico doing well means more respect for CONCACAF, a confederation in much-need of it. It also means, by association, more respect to the USA. Although we all know how difficult it is to play in places like Honduras and Jamaica, most around the world still consider it a pretty easy region to qualify out of.

It hasn’t been so easy, however, especially for Mexico. The team is currently in third place with eight points in the Hexagonal standings – three ahead of Costa Rica and five behind the United States. Even the Estadio Azteca doesn’t seem like such a scary place anymore. Its last three games in Mexico City ended 0-0, including the one against the United States in March.

“I say goodbye (to Brazil) and hope to see you next year,” said De La Torre.

That’s the hope of an entire nation. On September 6th, Mexico hosts Honduras at the Azteca. Anything short of a win would end De la Torre’s tenure as coach – and ultimately mean Mexico missing out the World Cup finals.