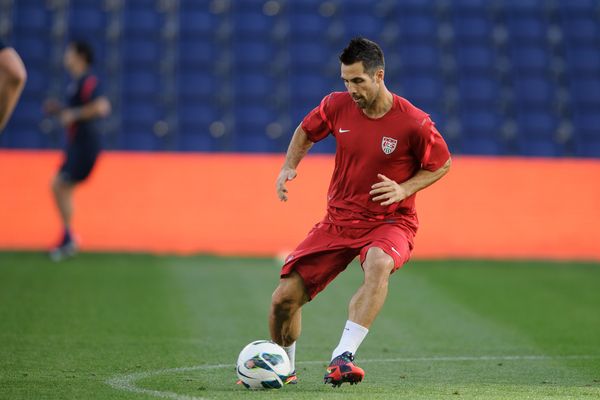 By Clemente Lisi – NEW YORK, NY (July 31, 2013) US Soccer Players – Carlos Bocanegra was not on the field Sunday afternoon in Chicago as the US players celebrated winning the Gold Cup. Instead, he watched on television in his hotel room some 1,700 miles away in Seattle, watching every pass and kick as if he were at Soldier Field.

“Panama was a really tough opponent. They particularly frustrated us in the first half,” said Bocanegra. “The goal was great and turned out to be the winner. Landon (Donovan) had a wonderful tournament, helped set up the goal. The last 10 minutes were frustrating. It was nail biting, but we won it in the end. I was happy.”

Bocanegra still uses “us” and “we” when he talks about the National Team. You can’t blame him. The 34-year-old defender has been part of the senior National Team since 2001. Although he was not on coach Jurgen Klinsmann’s roster for the Gold Cup, Bocanegra has returned to play in Major League Soccer with Chivas USA and is working to make his way back on the US squad in time for the 2014 World Cup.

“You have to earn it,” Bocanegra said. “I love to represent my country. It’s more about what you do on the club level. I have to work hard each week and hope to get the call.”

What Bocanegra is doing each week is trying to make Chivas USA into a more competitive club. Currently in last place in the Western Conference, Chivas USA is 4-12-5 at the All-Star break and looking for a respectable finish this season. This past Sunday night, Seattle got the better of Chivas USA 2-1 at CenturyLink Field. Despite the loss, Bocanegra was impressed with what he saw on the field – and in the stands. Bocanegra, who last played in MLS with the Chicago Fire in 2001 before heading off to English side Fulham, said the fan experience in places like Seattle has changed the league.

“Going up for a game in Seattle was pretty cool. I’d seen it on TV but never played a (MLS) game there,” he said. “They draw 30 to 40 thousands fans per game. Things like that, the atmosphere at games, has changed. It’s definitely a European feel to it up there (in Seattle).”

Bocanegra, who has 110 caps and 14 goals for the USA, also said MLS has gone a long way in developing players over the last decade and providing the National Team with a deeper player pool, particularly on defense.

Bocanegra returns to MLS after nearly 10 years of playing in Europe. A veteran of the English, French, Scottish and Spanish leagues, the former National Team captain said each country was different. Asked which league was the toughest, Bocanegra said the Scottish League was “the most physically demanding.”

“Each league is different, Scotland was definitely the most demanding on your body week in, week out,” he said, recalling the 2011-12 season with Glasgow Rangers.

Bocanegra, who also played for Rennes and Saint-Etienne, said the French league was “more tactical” and that “they really have great athletes there as well.”

Personally, being back in MLS provides Bocanegra with the challenge of trying to make Chivas USA better while trying to get a spot on the National Team. Bocanegra is clear, however, that helping Chivas USA is his top priority since officially signing with the team July 1.

“It’s a good challenge for me. I’m glad to be playing here to be back in Southern California,” he said. “We’ve been working hard. We didn’t get the three points in Seattle, but we’re getting better and better with every game. We have to improve and just put a better product on the field.”