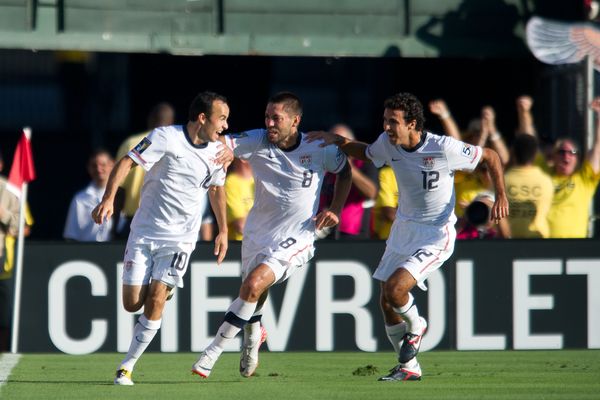 By Clemente Lisi – NEW YORK, NY (July 3, 2013) US Soccer Players – In this Summer packed with MLS games, preseason friendlies, World Cup Qualifying, the Confederations Cup and U-20 World Cup, the start of the 2013 CONCACAF Gold Cup just days away adds to the already-packed fixture list. Of course, the biggest sport outside of soccer itself is trying to predict how teams will do and who will win a competition. In the case of the biannual Gold Cup, there is little doubt what the final will be: USA vs. Mexico. It’s not just me saying it, but the tournament’s history dating back to 1991.

Now in its 12th edition, Mexico has six Gold Cup titles, The USA four, and Canada one. Clearly, Mexico and the United States are the region’s superpowers with no one else even coming close. That will also be the case this month.

Let’s start with the USA. To begin with, it has the easiest of the tournament’s three first-round groups. Placed in Group C with Costa Rica, Belize and Cuba, the USA has a winning record against all of them and should cruise to the knockout round. Ditto for Mexico who is in Group A with Canada, Panama and Martinique. Once the teams make the knockout round, there should be little in the way of each of them to get to the final.

If the final is USA-Mexico (a very likely scenario), which team is best equipped to win? Of course, the US players are confident of a victory. Landon Donovan, who will be making his National Team return at the tournament following his brief hiatus, last week told LA Galaxy Insider: “For us, the goal is always the same. Get out of the group and try to win the tournament and it’s a tournament that we feel like we have a good chance to win so we always approach it that way.”

Total agreement there, and statistical proof backs up why the Americans will come up on top. Aside from making his return, Donovan is also the USA’s all-time leading scorer at the Gold Cup with 13 goals. By comparison, no current Mexican player is in the top eight.

So, what do you make of Mexico’s last two Gold Cup titles? El Tri‘s victory in 2009 – a 5-0 win over the USA in the final at Giants Stadium – featured a second-string American team since the tournament was played shortly after the Confederations Cup. Two years ago, Mexico again beat the USA in the final 4-2 in a game played before a pro-Mexican crowd at the Rose Bowl. This year, Chicago’s Soldier Field hosts the final, where the crowd should be more evenly split if we get the expected matchup of the regional powerhouses.

The biggest factor as to why the USA is at an advantage is because of Mexico’s poor form over the past year. The team’s Confederations Cup was a disappointment with players looking out of sync. The Americans go into the tournament relaxed; it’s do-or-die for Mexico. If that poor form continues, Mexico could find itself out of the Gold Cup sooner than ever before. Even pro-Mexico bloggers are finding it difficult to defend the team.

Writing for FutNSoccer, Cesar Hernandez said: “My worry is that after seven months of assuming ‘Mexico will do better next game,’ I began to question whether there was anything concrete at all about all of the praise and potential we were putting on the team. I still believe Mexico has the talent to rise above, but it’s becoming more difficult to do so with each game.”

Consider this: Although Mexico holds a better overall Gold Cup record (W-T-L) versus the USA (38-7-6 compared to 42-6-7), it’s the Americans who have won a slightly largest percentage of games played. The United States have won 42 out of 55 games (76.3%); Mexico 38 out of 51 (74.5%) – that is an important statistic in a tournament that only features 12 teams and only three knockout rounds.

Furthermore, a look at all US and Mexico games played this year, the Mexicans have posted a 2-8-2 record over 12 games (which includes matches against Italy and Brazil); the Americans are 5-2-2 in nine games (with games against Belgium and Germany’s “B” squad). Despite these records, its obvious that the CONCACAF deck is stacked in favor of a USA-Mexico final, but look for the Americans to lift the trophy come July 28.