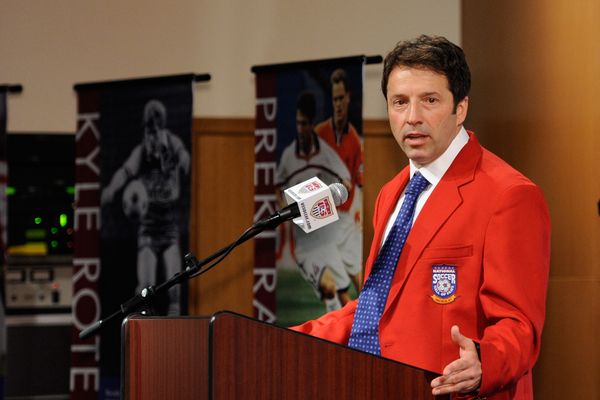 By Clemente Lisi – NEW YORK, NY (July 22, 2013) US Soccer Players – The USA may be preparing to take on Honduras Wednesday night in the semifinals of the Gold Cup, but the greatest semifinal match to ever take place at the CONCACAF tournament occurred in 1998 between the Americans and Brazil. In what is one of the greatest moments in US Soccer history, the National Team defeated Brazil 1-0 that year. The tournament, played in February because it fell in a World Cup year, saw the Americans pitted against the then-reigning world champions. Entering the competition, Brazil, who had participated at the Gold Cup as an invitee of CONCACAF, had never lost to the USA.

Brazil’s run of form included a win against the United States in the ’94 World Cup, the ’95 Copa America, and the ’96 Gold Cup. What all of these games had in common was the score line. In all three competitive games, Brazil won 1-0. In the 1998 Gold Cup, it was the USA’s turn.

For all of Brazil’s one-name wonders, it was an American player with a single name, Preki, who decided the match with a left-footed strike that won the USA the game and put them in the history books. After a career that included the Tacoma Stars of the Major Indoor Soccer League, Preki made a name for himself in Major League Soccer as an outdoor player with Kansas City. After gaining US citizenship in 1996, Preki became part of the National Team and continued to score goals. His 65th minute strike against Brazil on February 10, 1998 at the Los Angeles Memorial Coliseum is the biggest of the four goals he scored for the USA in 28 appearances.

“I have scored a lot of goals in my life but I will never forget that one,” Preki told me in 2010 after his induction into the US National Soccer Hall of Fame. “To come off the bench that night and score a goal was really wonderful. But I didn’t do it alone. Kasey was the star. He made the saves and kept us in the game that night. He was great.”

Preki’s comments could not be more spot on. His goal aside, the Americans would have never won the game without Kasey Keller in net. The goalkeeper made 10 saves to preserve the win. It may very well have been the best performance by a goalkeeper wearing the US jersey. Keller played so well that the great Romario, during the course of the match, even shook his hand following yet another wonderful save. Romario even admitted afterwards that it had been “the greatest performance by a goalkeeper ever.”

Making the win even greater was that the USA was missing stalwarts Tab Ramos, Claudio Reyna, and Thomas Dooley to injury. In the era of three-team groups, the US had no issues with Costa Rica or Cuba, winning both games with Preki scoring the winner in the 2-1 win over Brazil on February 7th. Against a full-strength Brazil, something that wouldn’t be the case in other Gold Cup appearances, the United States pulled out an improbable win against one of the best lineups in the world.

“We knew we were playing against an exceptional Brazil team, a team that had Romario, one of the greatest strikers in the history of the game,” then-US coach Steve Sampson told USSoccer.com. “But on that day, it was all about Kasey Keller, his exceptional play and how brilliant he was in that game. Romario calls it one of the best goalkeeper performances in the history of soccer and I agree.”

In the game’s post-game interview, broadcast on Fox Sports World (what later became Fox Soccer Channel), Keller said, “It was just our night.”

Was it ever. The Americans have not beaten Brazil since that match. Their all-time record against Brazil stands at 1-16-0 and now includes an overtime loss in the 2003 Gold Cup and a 3-2 loss in the in the final of the 2009 Confederations Cup.

The USA went on to lose the 1998 Gold Cup 1-0 to Mexico in the final. Brazil finished third with a win over Jamaica. 15 years later, it’s the USA – Brazil game that the players on both teams – not to mention US National Team fans – will never forget.