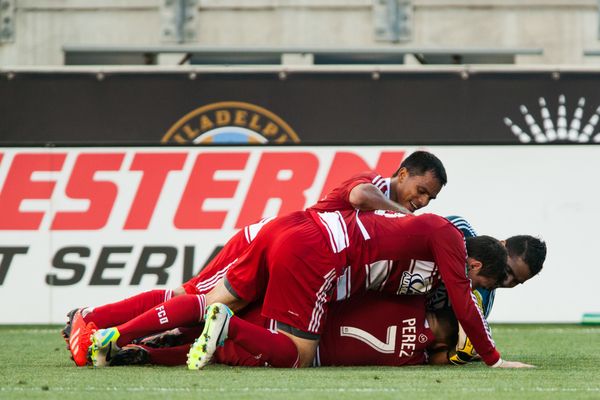 By Clemente Lisi – NEW YORK, NY (Aug 26, 2013) US Soccer Players – Blas Perez’s resume is long. Very long. A soccer nomad if you will. The Panamanian striker has played for 15 clubs during his professional career, but he said his time with FC Dallas has allowed him to be part of something special.

“MLS is a growing league,” said Perez. “More Central American players are coming here, and more Panamanian players will come, and that’s a good thing for us CONCACAF players.”

At the start of the season, Perez was the only Panamanian player in Major League Soccer; something that changed this summer after Panama reached the Gold Cup final. Since losing the championship game to the United States, others have followed in Perez’s footsteps such as goalkeeper Jaime Panedo (Los Angeles) and striker Gabriel Torres (Colorado).

Although they lost in the final, Panama defeated Mexico twice during the tournament – something Perez said his team could not have done without the kind of supported normally reserved for El Tri.

“Pulling off those two wins against Mexico was big for us. I really want to thank the Panamanian fans, especially the ones who live in Texas, who backed us,” he said, referring to Panama’s 2-1 win over Mexico in the semifinals at Cowboys Stadium in Arlington.

Perez said he hopes the recent form shown at the Gold Cup could translate into a World Cup berth. Perez is the catalyst for Panama’s success and his 32 goals in 80 appearances are a testament to that. He scored 18 of those goals in the last two years. Panama, which has never qualified for a World Cup, are fifth in the six-team Hexagonal but can still qualify. They host the United States on the final match day on Oct 15th.

“This is a very important year for us,” said Perez, referring to Panama’s upcoming World Cup Qualifying schedule.

Perez is having a great 2013 – and not just for Panama. He leads FC Dallas in scoring with 10 goals this season – including one this past Saturday to help his team rally from a two-goal deficit against San Jose to earn a 2-2 draw – and the team is currently fighting to get into the playoffs.

“I love scoring and setting up goals for my teammates. That’s my job,” he said.

“I believe Los Angeles is the toughest team. They are the champions,” he said.

The 32-year-old Perez is a trailblazer for Panamanian soccer. He is already been labeled by some as the best player to ever come out of the Central American nation. Before landing in MLS, he played in some of the world’s finest leagues, including Colombian side Cucuta Deportivo. It was while in Colombia that Perez made a name for himself, helping his club excel at the 2007 Copa Libertadores. At the tournament, Perez scored eight goals – two against famed Argentine club Boca Juniors — as Cucuta Deportivo reached the semifinals.

“Playing in the Copa Libertadores and scoring eight goals in the competition was big for me. It allowed me to showcase my talents and play in Europe,” he said.

Indeed, that allowed Perez to sign with Spanish second division club Hercules. He played there for one season, tallying four goals in 16 games. He spent the next few years playing for various Mexican clubs (including Pachuca and San Luis, not to mention a brief stint in the Middle East with Dubai-based club Al Wasl in 2009) before coming to Texas.

“It is really rare these days to see a player, especially a striker, stay with one club for a long time,” said Perez. “I’ve changed teams but for me, as a striker, you are the one teams like to change if you don’t score goals. The only thing I have to show with each game is that I am doing my job and that is scoring goals. I hope the (FC Dallas) fans appreciate what I have done.”