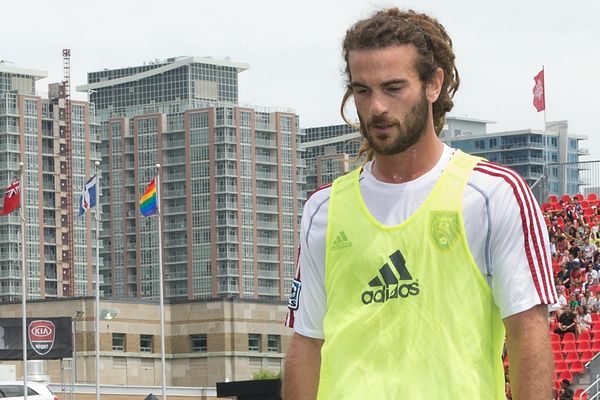 By Tony Edwards - San Jose, CA (Aug 15, 2013) US Soccer Players - In Thursday’s column, Tony asks who are the most effective passers in Major League Soccer; wonders along with everyone else how to explain the Red Bulls; and remembers Marcus Hahnemann’s best Seattle moment.

In terms of average passes completed per game, who are the two most effective players in MLS?

You don’t need to get into advanced game metrics to see that the key number next to Seattle’s Osvaldo Alonso is that he’s only played in 14 of Seattle’s games this season. With a number of World Cup qualifiers coming up and Seattle presumably being shorthanded during those games, having Alonso healthy and on the field might end up determining where in the Western Conference the Sounders finish.

What happens to the Red Bulls on the road?

Certainly Mike Petke doesn’t know. “It’s mind-boggling and I’m sure it’s mind-boggling to players, too. I would hope it is. I can’t put my finger on it, to be honest with you. I can’t. If I could, we’ll go undefeated the rest of the season on the road if I had that answer,” Petke told the league’s website.

The New Jersey franchise is 1-3-1 in its last five road games. That they have taken four points while being shut out in four of those five games is, I guess, a reason for some optimism. However, the Red Bulls only have one more road game in August, and it’s against Chivas. September and October, however, include two visits to Houston and a trip to Seattle.

Including US National Team player Jozy Altidore, how many new players have Sunderland signed?

An incredible 10, including loans, as Sunderland look to improve on last season’s near-relegation drama.

Sunderland remains one of those clubs you look at from a distance, see the crowds they draw, and the quality of coaches they have had (Keane, Bruce, O’Neill), and you ask yourself why they aspire to mid-table rather than challenging for a European place. Step one, of course, was getting back to the Premier League. Now what?

Think what you will of his personality and politics, but Altidore’s new coach Paolo DiCanio has brought a new approach to Sunderland. Widely touted as having passed his UEFA coaching licensing courses with flying colors and for his hands-on work with the players in training, everyone is saying the right things, so far, about Sunderland’s preseason.

Here’s the thing. Another team in red-and-white stripes wowed Europe a few years back with stylish, exciting play and a coach who brought his own ideas and tactics. However, Marcelo Bielsa burned out his Athletic Bilbao team that season and when it came to the business end, Bilbao came back home with nothing but a runner’s up medal in the Europa League. Bielsa’s second season at Bilbao was nothing like his first, as the team struggled. Bielsa is not coach at Bilbao any longer.

How it goes on Saturday for Sunderland against Fulham isn’t going to determine how DiCanio’s time at Sunderland will go, but seeing if DiCanio can keep his team functioning at a high level as the new signings integrate is one of the more interesting stories this coming EPL season.

Which player has scored the highest percentage of his team’s goals on the road?

Again, thanks to whoscored.com, US National Team player Jack McInerny has scored 47% of Philadelphia’s away goals (7 of 15). He also leads the League in average shots per game on the road.

Were these back-to-back starts for former US National Team goalkeeper Marcus Hahnemann the highlight of his Seattle career?

Hardly, as he told the Seattle Times. “My biggest Sounder moment was lifting up the trophy at Memorial Stadium,” said Hahnemann, who won A-League championships here in 1995 and 1996. In 1995, the A-League was the highest level of professional soccer in this country. It’s good of Hahnemann to remind us that soccer existed before the Sounders joined MLS.

Los Angeles FC is struggling but the safety net of the playoffs may still have plenty of room for last season’s record setting team.

The San Jose Earthquakes do not play it safe with a pressing style, but losing 7-1 and 6-1 is calling their project into question.

UEFA is allowing a limited number of fans to attend Thursday’s Super Cup in a trial to see how workable a return to in-stadium attendance might be.