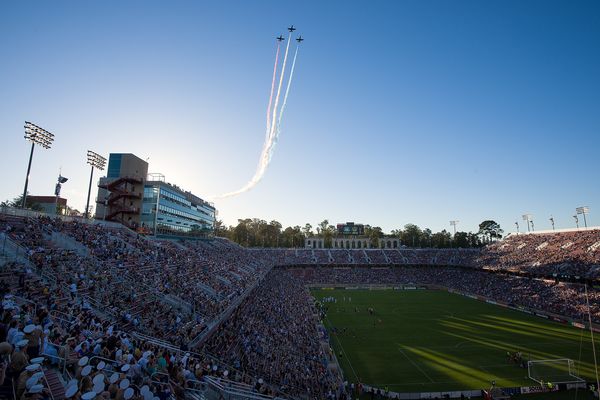 By Jason Davis – WASHINGTON, DC (Aug 7, 2013) US Soccer Players – On June 29th, the San Jose Earthquakes beat the LA Galaxy in dramatic fashion in front of 50,000 fans at Stanford Stadium. The game was one of a handful the Quakes have played away from their usual home of Buck Shaw Stadium over the last few years, the better to maximize the possibilities with a high-profile opponent in town. Although the practice began during David Beckham’s MLS stay, San Jose has continued it in the post-Beckham era. This year’s Stanford game delivered a massive crowd, almost all of them cheering for the Earthquakes.

It appears then, at least when it comes to the Galaxy in the Bay Area, a visiting team can dictate demand. It’s hard to know if the big crowd was due to people simply conditioned by Beckham’s visits or a set of fans who honestly see the Galaxy as a draw. As a one-off event, San Jose’s promotion of the Galaxy game probably outstrips most other marketing efforts throughout the season. Does that mitigate the reasonable conclusion that MLS is home to a phenomenon prevalent in Major League Baseball and the NBA – the big road draw?

This is evolution beyond the simple appeal of individual star power. The crowds that showed up to see Beckham play when he first made his American landfall were easy to identify as temporary bumps in interest. The full house at RFK to see his league debut. Old Giants Stadium filled to bursting to see the world’s most famous soccer player stretch out his famous right leg on artificial turf. Those were flashes in the pan, sure to fade quickly as MLS got used to Beckham’s presence, or when Beckham ultimately decided to move on.

Clint Dempsey, too, might “move the needle” now that he’s back in Major League Soccer. Time will tell if bigger-than-typical crowds come out to watch the US National Team captain play on the road in Seattle colors. It won’t be the Beckham level – the English superstar attracted many with little interest in soccer or MLS – but it might add a few thousand to crowds in places like Colorado, Columbus, and Dallas.

But Seattle’s acquisition of Dempsey does reinforce the notion that MLS is now a league with stratified tiers of clubs. Seattle joins LA and New York on the top of level teams, those that spend the most and have the biggest names. Could those teams begin to take on the characteristics of the Yankees and Red Sox in baseball and the top teams in the NBA (recently the Lakers, Heat, etc.) and drive tickets sales on their visits to other MLS cities? MLS team marketing departments aren’t immune to using whatever tools necessary to sell tickets, and a visit from the Sounders, with their shiny new National Team captain on board, makes for easy fodder.

Every MLS market in which Dempsey is likely to appear through the end of the regular season has leveraged his image to sell extra tickets. LA and New York included. In the case of Houston, Seattle’s second stop on their post-Dempsey signing tour, the American captain’s likeness appeared in a ticket push before the Sounders had even unveiled him at Century Link Field.

There are a couple of reasons to think that any bump from visiting team will be fleeting at best and mostly dependent on the inclusion of one or two big name stars. First, the Yankees and Red Sox not only draw on the road thanks to their winning ways and famous players, but because of the number of transplants from their home regions that live around the country. No MLS club has enough of a legacy, or enough of a loyal diaspora, to push numbers up merely by their presence.

Second, MLS fans are typically more provincial, at least in their 2.0 incarnation, than baseball fans. The number of casual fans likely to come out season after season because it’s the Galaxy in town, or because the Sounders are making a visit, won’t be very large based on current evidence. Television ratings are a strong indication that the soccer fans not going out to the stadium week after week aren’t watching MLS on television, either. While the also-rans of the NBA rely heavily on visits from their league’s marquee teams coming to town to fill seats, MLS clubs can’t expect major interest in out-of-town clubs with a history of parity and the era of star power so short.

Then again, there’s the evidence, and unclear implications, of the Galaxy’s visit to San Jose. It’s worth suggesting that the Earthquakes-Galaxy dynamic might be unique in Major League Soccer, making the massive crowd at Stanford Stadium indicative of nothing on a wider League scale. Because that game was not in the Earthquakes usual home venue, we can dismiss it as an outlier.

Still, the Galaxy’s drawing power on the road seems to be larger than their MLS peers, but with so many variables, it’s difficult to pin down why. Is it MLS teams putting more effort because the stars are coming to visit, which leads to selling more one-off tickets than usual, or are the stars bringing out the fans on their own, because they’re stars? Even with Beckham gone, there might be lingering effect of his time touring the country with LA.

The teams immediately behind LA in road attendance include FC Dallas and Chivas USA. That fact alone may invalidate any conclusions drawn from the road attendance numbers in MLS in 2013, even for the Galaxy. Despite their enormous drawing power at home, the Sounders are actually last in the league in road attendance.

MLS very well might develop a culture that leads to certain clubs driving larger attendance numbers on the road. As the reaction to Beckham (admittedly an exceptional case) proved, a star can in fact entice fans to buy tickets. Clint Dempsey does not have Beckham’s crossover appeal, but his status as an American star in America after a successful European career bodes well for bigger crowds than usual wherever he goes.

The notion of a “big club” being more of a draw on the road in Major League Soccer isn’t yet proving to be true.