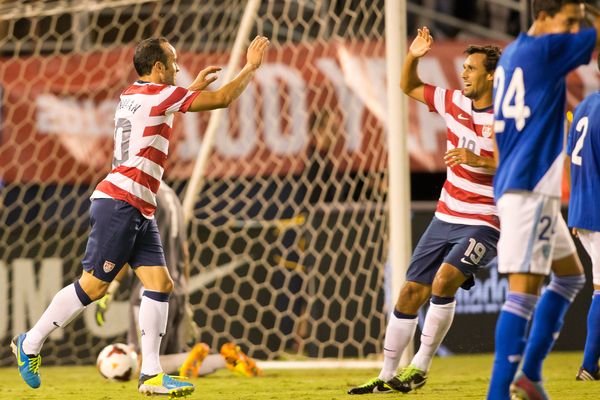 By Clemente Lisi – NEW YORK, NY (Sept 2, 2013) US Soccer Players – The United States is just four games away from making history. The National Team has to win its next four matches – all World Cup Qualifiers against Costa Rica, Mexico, Jamaica and Panama – in the next two months to tie the all-time record for consecutive victories. Spain currently holds the record at 15 – a number that was smashed after losing to the USA at the 2009 Confederations Cup.

The current USA streak began on June 2nd with a 4-3 win versus Germany. Since then, the Americans have defeated, in this order, Jamaica, Panama, Honduras, Guatemala, Belize, Cuba, Costa Rica, El Salvador, Honduras, Panama and Bosnia-Herzegovina. This being US Soccer’s centennial year, the streak is yet another sign in how far the National Team has come over the past 100 years. More importantly, the streak is a momentum-builder going into a World Cup year and at a time when its regional rival Mexico has lost so many games in 2013.

“It’s exciting and I think it shows how far the program has come,” striker Jozy Altidore said.

While the United States is on the verge of making history, it has traditionally been responsible for ending unbeaten streaks – not setting them. The aforementioned win over Spain ended that team’s winning streak. The victory (with goals from Clint Dempsey and Altidore) remains one of the most memorable in recent US Soccer history. Spain shares with Brazil the unbeaten record (which includes draws) of 35 games. Brazil’s loss at the 1996 Gold Cup ended that team’s streak. Again, it was the USA that busted that record with a 1-0 win (a goal by Preki), which remains the only time in history the Americans have defeated the five-time World Cup champions.

Since beating Germany, the USA has won the Gold Cup and enter the fall prepared to win the Hexagonal and qualify for Brazil ‘14. Dissecting the streak also allows us to see the National Team’s strengths and assess which players should be a part of what is turning into an increasingly deep player pool for coach Jurgen Klinsmann. As my colleague Jason Davis put it in July: “Winning breeds confidence, which breeds more winning, which breeds more confidence, and so on.”

To put this streak into perspective is comparing it to others. Here’s some context: Arsenal holds the record for consecutive wins in the Premiership at 14 recorded in 2002. In Major League Soccer, the Los Angeles Galaxy put together a 15-game run that stretched from 1997-98. The all-time record for a club team is 32 matches by Al-Faisley of Jordan – a streak that stretched for two years starting in 2001. The record held for consecutive wins by an American pro team – in any sport – was accomplished by a soccer team. The San Diego Sockers, who play in the PASL, recorded 48 straight wins earlier this year.

Here is a look – by the numbers, of course – at the USA’s impressive run and some statistics compiled by the team along the way:

39
The number of goals scored by the USA during the streak.

38
Players used by Klinsmann during the 12-game streak.

14
The number of players who have scored during the streak.

9
Appearances made by DaMarcus Beasley, the most of any US player.

8
The number of consecutive games played by Mix Diskerud during the stretch, the most of any player on the roster.

7
As in goals for Altidore and Landon Donovan. First, let’s start with Jozy. The streak began with Altidore, who scored a goal in each of the first four games. Not called up to the Gold Cup squad, Altidore picked up where he left off and scored a hat trick in a 4-3 come-from-behind win last month over Bosnia-Herzegovina in a friendly in Sarajevo. The goals made him the first player to score in five straight games for the National Team. Brazil ’14 could be the place where Altidore is finally able to assert himself as the team’s leading striker and the man who can win games for the USA. At the same time, Donovan’s return to form after his self-imposed hiatus showed again why he is arguably the best player to ever don the USA jersey. He has scored seven goals and assisted on seven others during the streak. His seven goals rank second only to his own record of 10 goals in 2009. In what could be his final World Cup appearance, Donovan has showed everyone he still has what it takes to marshal the US midfield, create chances and score goals.

6
As in the number of Chris Wondolowski goals. The San Jose Earthquakes striker entered 2013 with eight caps and no goals for the USA. Wondo finally took his MLS scoring prowess and translated that to the international game. During the streak, he scored six goals, highlighted by a hat trick in the first half on July 9 in what turned out to be a 6-1 rout of Belize.

3.25
The number of goals the USA has averaged during the streak. A number so impressive that the Americans could be a real threat at Brazil ’14 should they keep this sort of form going into next year.

1
The times Wondolowski’s name was spelled wrong on his jersey. It happened against Belize. No matter. He scored three goals that night.