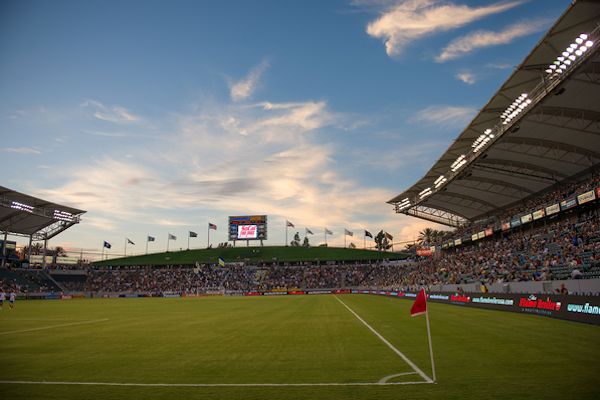 By Clemente Lisi – NEW YORK, NY (Sept 19, 2013) US Soccer Players –It’s the game everyone has been waiting for. Los Angeles and Seattle will duke it out Saturday night at StubHub Center (10:30pm – NBCSN). The Sounders look to keep their spot at the top of the Western Conference and the Supporters’ Shield table. The Galaxy will try to get a step closer to sealing a playoff spot. Although Seattle is the team dominating the Western Conference, Los Angeles is the two-time defending MLS Cup champion and always finds a way to win the big games. Therefore, the Sounders will be looking to make a statement Saturday that Los Angeles will have to go through them if they want to defend their title later this year.

The game, however, isn’t just a fight between heavyweight clubs – but will feature Landon Donovan versus Clint Dempsey, a subplot to an already exciting match. Teammates on the US National Team, they represent the best players – possibly ever – to don USA jerseys. Both have played abroad, both have excelled in Major League Soccer, to varying degrees, and now they square off at StubHub Center in a game that will start the fall in dynamic fashion.

Dempsey downplayed the importance of taking on Donovan.

“It’s the same as playing against anybody. It’s not any more special,” he told the Sounders’ website earlier this week. “When you’re playing against people, they’re your opponents,” he said. “I don’t care if it’s my brother or if it’s my mom, it’d be the same. I’d want to win.”

USA fans were delighted to see the two players reunited for the recent Costa Rica and Mexico World Cup Qualifiers. Both also recently signed long-term contracts with their respective teams. Both are in their playing prime. So, how do you compare these two gifted players?

Of course, Dempsey and Donovan can’t ignore how their respective clubs have been doing as of late. Last Friday, Seattle downed Real Salt Lake 2-0 before a home crowd of 55,000. With the Supporters’ Shield in sight, Seattle is 8-1-0 in its last nine matches. The Sounders have also amassed five straight wins, a franchise record, and are now favorites for MLS Cup.

On the other hand, never count out the Galaxy despite some bad results. Los Angeles is coming off playing DC United, the worst team in the League, to a 2-2 draw on the road – twice giving up the lead. Poor defending has hurt the Galaxy this season and the team is in fourth-place in the Western Conference, five points behind Seattle.

“We have a tough game coming up in Los Angeles,” admitted Schmid during a news conference on Monday following practice. “We want to succeed on the road as well as home. The way our League is set up, if you want to win MLS Cup then you have to win on the road as well.”

This is the context in which the Dempsey-Donovan duel takes place. Not a bad set of circumstances if you’re Dempsey. He is still looking to score his first MLS goal since returning to the League in August and this could be his chance.

As for Donovan, he is used to comebacks – his recent National Team exploits are a great example – and this game gives him yet another chance to show that adversity is no barrier to success. Donovan’s three-month sabbatical did him some good and the veteran has played with newfound energy and confidence.

To Galaxy coach Bruce Arena there is no doubt who the best American player is at the moment – or ever.

“He is the best player in the history of the game in our country,” Arena said.

Dempsey has had no time off, but he is also enjoying a great time in his career. The striker was hardly used against RSL, while Donovan suffered an ankle sprain versus DC United. Adding to LA’s troubles is a CONCACAF Champions League home game against Salvadorian club Isidro Metapan on Wednesday night, a match Arena used to rest the USA star. Seattle, meanwhile, has had a week to prepare.

The last time there was a Dempsey-Donovan duel was in January 2012 when Fulham took on Everton in the fourth round of the FA Cup. At the time, Ives Galarcep wrote: “It is hard to argue that they aren’t the two most beloved American players. You can understand why, given the success they’ve both enjoyed, though it is the unique paths both men have taken to reach their stardom that have shaped them into very different characters.”

In that game, it was Donovan who ended up on top as Everton won 2-1 at Goodison Park. Donovan, who assisted on both goals that night, inspired the win. In a fan poll of player ratings for that game on Yahoo! Sports, Donovan averaged an 8.2, the highest on his team. Dempsey, who failed to do anything that night to get himself highlighted in a box score, averaged a 7.1 in the same game.

“He’s a diamond of a guy,” Steve Round, Everton’s assistant manager, told The Guardian newspaper following the game. “The lads all love him and he’s a very intelligent player who also brings speed to the team and allows us to get from back to front very quickly. He has brought a lot to the club. He is a top player.”

Of course, Seattle-LA won’t settle which of the two is the better player ever. It will just be the latest chapter in the battle to be the best. Those who benefit most from this rivalry are the fans and Major League Soccer. To have the chance to say that the US has not one, but two, of the greatest players ever says a lot about how far MLS and American soccer as a whole have come over the past 20 years. One thing is for sure, that both players belong on soccer’s Mount Rushmore no matter which team wins this weekend.