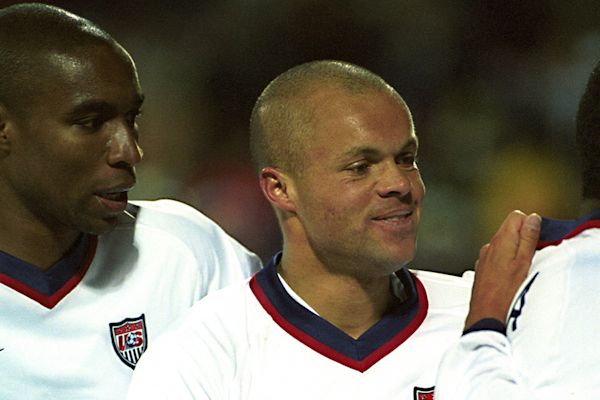 By Clemente Lisi – NEW YORK, NY (Sept 9, 2013) US Soccer Players – The USA and Mexico meet again on Tuesday night in Columbus. Mention those two teams and that city and 2001 immediately comes to mind. The phrase “Dos a Cero” was born as a result. That’s Spanish for 2-0. As in the final score when the USA defeated Mexico that year.

The score line, forever etched into the memories of National Team players of the time and fans, was a watershed moment for US soccer. The National Team had defeated its regional rival (in a World Cup Qualifier no less) and was well on its way to qualifying for the 2002 World Cup finals in Japan/Korea. Since then, “Dos a Cero” has spawned T-shirts, posters and even a song.

The result was not the first 2-0 game involving the United States and Mexico. In the semifinals of the 1991 Gold Cup, the Americans stunned Mexico by the same score to reach the championship game. The “Dos a Cero” game that took place on a cold night in February 2001 at Crew Stadium in Columbus showed, for the first time, that the USA also had home-field advantage when it needed it. Mexico was no longer the sole soccer superpower in CONCACAF. Less than a year later, the US made that abundantly clear with a 2-0 defeat of Mexico at the World Cup.

The Americans went into the February 28th match needing a win to open the Hexagonal. After all, every game in the final round of World Cup Qualifying is crucial. The Americans were playing at home. Knowing they would likely drop points at away at Estadio Azteca, this made it a must-win match, potentially setting the tone for the remainder of the Qualification process. The majority of the fans wore red and blue, not red and green, and the Mexican players grew quickly overwhelmed by the cold Ohio air and pro-USA crowd of 25,000. It was “La Guerra Fria” – soccer’s “Cold War” – a name the rivalry was given by the Mexican media for obvious reasons.

“It was cold. The field felt frozen,” recalled defender Tony Sanneh. “I braved it and wore short sleeves in the first half and no gloves. Not sure what I was thinking.”

On the eve of the match, then-US coach Bruce Arena said of Columbus as a venue: “I think it will provide a real home-field advantage for our team. …  After weighing all these factors, we felt that Columbus is probably the best venue to give us the opportunity to win this important game.”

And win the USA did.

“It was one of those games where we finally started to turn things around,” midfielder Earnie Stewart, who scored the second goal that night, told USSoccer.com earlier this year. “All of a sudden we went to a new phase. When we played at home against Mexico, we pretty much took over and started winning those games. Columbus was one of those first games where we actually had the attitude that we were playing at home and we could definitely win this game.”

With temperatures dipping to 28 degrees at kickoff, both teams appeared to suffer the cold at first. Further hurting the USA were injuries to Claudio Reyna and Brian McBride, which resulted in an unproductive first half for the Americans. McBride exited the match in the 15th minute due to swelling near his right eye following a collision with defender Rafael Marquez after just 10 minutes. Reyna exited in the 43rd minute with a left groin strain.

The two substitutes that replaced them – striker Josh Wolff (for McBride) and midfielder Clint Mathis (for Mathis) – made the difference in the end. The duo combined for the opening goal in the 47th minute. Mathis played a long ball from to Wolff, who beat Mexican goalkeeper Jorge Campos and slotted the ball into the empty net. Wolff was also involved in the second strike, luring Campos outside his net to the near post, then laying it across the box where Stewart scored in the game’s dying minutes.

“Once we scored the second goal we knew it was over. (Stewart’s goal was) the nail in the coffin,” recalled Sanneh. “The whole game I felt was do-or-die.”

For Sanneh, the win signified a shift in power – and CONCACAF hasn’t been the same since that night.

“That game signifies the turning point where we looked at (Mexico) as equals or lesser than us,” he said. “We went on to beat them in the World Cup because we knew we could.”