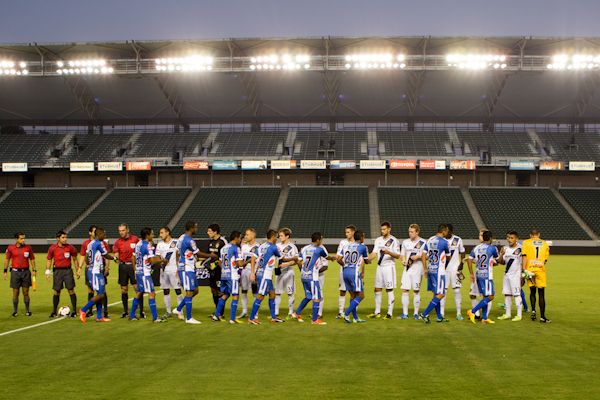 By Jason Davis – WASHINGTON, DC (Sep 27, 2013) US Soccer Players – This is an old conceit, but humor me for a second. If you asked 100 MLS types (fans, coaches, administrators, league officials, take your pick) what the CONCACAF Champions League means to American soccer, you’re almost certain to get 100 different responses.

Sure, the it’s generally accepted that MLS “has to win” the tournament in order to take the “next step”, but it’s not really clear why that’s the case. Even if we buy that story – because a berth in the Club World Cup is on the line and maybe that means a “competitive” match against one of the world’s biggest clubs on something approximating a “big stage” – it doesn’t really explain why fans should ignore the signals sent by MLS teams who clearly rate the competition somewhere between annoying distraction and outright burden. Nevertheless, the media trots out the story, typically timed with the last team standing, that MLS “needs” a continental champion.

The CONCACAF Champions League is a lie American soccer tells itself to give us a reason to dream of questionable validation. Any overuse of quotation marks is purely down to that phenomenon.

The Champions League is under-attended and under-loved until the final few rounds. Even now, MLS teams are sending out reserve teams in midweek matches played in front of sparse crowds few care about and fewer watch.

It’s not just that the Champions League clashes with American sporting sensibilities, though that’s true on some level, it’s that the incentive to win exists almost solely in a distant, irrelevant future. It’s difficult to convince coaches that need league success to justify their jobs and players who deal with grueling travel and the stressful playoff races that giving their all in a tournament mostly played against teams they’ve never heard of is important. Minus the unknown team factor, it a lot in common with the US Open Cup.

On Wednesday night, the LA Galaxy advanced to the knockout rounds by beating Cartagines of Costa Rica 3-0 in San Jose. The goal scorers were Jack McBean, Chandler Hoffman, and Laurent Courtois. Between them, they have 494, zero, and 43 minutes for the Galaxy in MLS play.

Last week, the San Jose Earthquakes dominated Montreal 3-0 at Buck Shaw Stadium in a Group 5 match. San Jose got goals from Chris Wondolowski, Marvin Chavez and Shea Salinas – all first choice starters in a lineup that wasn’t far from the Quakes at full strength.

When the teams taking the tournament most seriously are the ones with the least to play for on the league front, there’s something off about the emphasis placed on it by those directing the narrative. Don Garber and Major League Soccer made one of their teams winning the Champions League an emphasis because it is literally the only measuring stick the league has against any foreign competition. Friendlies don’t cut it, and because there’s an insatiable need on the part of fans both pro- and con-MLS factions to compare the league to others, it makes sense the MLS would push the Champions League as a hill to climb.

CONCACAF’s aping of Europe with the name and format of the Champions League, as almost every other confederation does, overstates the importance of the tournament from the outset. The CONCACAF version suffers from the comparison. CONCACAF is top heavy and uneven, the level of play from various parts of the region dragging down the competition as a whole. CONCACAF separates American and Mexican teams in the group stage, robbing those matches of any real intrigue. Mexican teams are almost certain to go through, and the American sides that fail to advance typically do so by their own lack of interest.

It raises a necessary question, as fans stay away from the Champions League games in droves: Should the fans allow themselves to be pulled along by the media obsession with the league’s performance, or would the media be wise to take their cue from the fans? Who is to say that the boosterism inherent in the yearly call for MLS to finally win the Champions League is the proper response to the tournament as it currently exists? The market is telling us something.

When things get serious in the knockout stages, with MLS still rousing itself after a winter hibernation, it’s a little late to start treating like the competition like it suddenly matters. The value of a spot in the Club World Cup, the nominal reward and a tournament with its own significant perception problem, is artificially elevated by Major League Soccer’s inferiority complex and the need to get one over on Mexican soccer. Pro soccer teams exist to win trophies, but not all trophies are made equal.

That’s the flipside of the “The Champions League is important” coin: the inherent assumption that it’s worth winning at all. The scheduling is disastrous. MLS coaches paid to win MLS Cups can’t afford to stretch what little quality they have in their teams for games played in front of tiny crowds in far flung foreign locales. Too many of the group stage games have little value, even as de facto reserve matches. The attempt to mirror the Champions League in Europe without a comparable depth of quality teams in high profile leagues means there’s little attention paid to what is often very bad soccer. The prize at the end of the road is fool’s gold.

Monterrey won three CONCACAF Champions League titles in a row. They finished third in the last edition of the Club World Cup. Do we doubt they’d trade those accomplishments for another Mexican league title or two if given the chance?

The simplest way to say it, with apologies for the unfortunate circular logic, is that the Champions League won’t be important until the Champions League is important. Every now and then, an MLS team might make a run at the title. Occasionally, an organization will prioritize the competition or make a show of doing so. Until the interest arrives, and the tournament begins to bear even a passing resemblance to its European namesake, maybe the best thing to do is to sit back and let it happen.