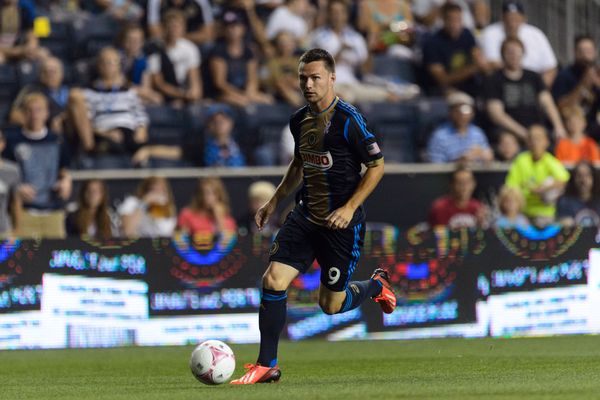 By Tony Edwards – San Jose, CA (Oct 10, 2013) US Soccer Players – In Thursday’s column, Tony analyzes Philadelphia’s style of play, asks what type of player Tab Ramos was looking for on his U-20 National Team, and wonders what we can learn from the seasons Montreal and Dallas are having.

Which MLS team’s midfield has scored the fewest goals so far this season?

According to the Delaware Times’ Matthew De George, one of the teams is the Philadelphia Union. Kleberson’s winning goal for the Chester franchise on Saturday night was just the seventh from a midfielder this season. The team also has only five assists from its midfielders this season. In perhaps the most predictable comment this season on whoscored.com, the game summary for last weekend’s Philadelphia-Toronto game said the Union ‘favoured long balls’… hey, it’s a British site. And one wonders why Philadelphia’s strikers have been streaky this season?

This is a reflection, not of the players, but in how they’re used. Maybe John Hackworth’s system works and keeps his midfielders on the field. Ok, but if Philadelphia’s ambition is more than the play-in game, the Union has to get its talented strikers the ball in better positions.

When it comes to choosing a player for a position, what is the stance of former US National team player Tab Ramos, currently US U-20 Coach?

From the second part of his interview with Soccer America’s Paul Gardner, Ramos emphasized that at every field position, but center back, he wanted the best players overall.

“For the U-20s we were selecting all the best players, not so much for specific positions,” Ramos told SA. “I’d rather have a good player in an unfamiliar position than an ordinary player playing a familiar role.” His underlying thought is that he is “looking for those players who can receive the ball in crowded areas and not panic.” Central defense requires a specific skill set. “You need at least one player who is tall and good in the air,” Ramos said.

When was the last time the Earthquakes gave up a goal at home?

Saturday July 27, when Portland scored in a 2-1 Earthquakes win. It’s probably no coincidence that US National Team player Clarence Goodson joined San Jose after the Gold Cup and that the Quakes have turned their season around since then. San Jose’s inability to defeat Vancouver (the game was a 0-0 draw), may well turn into two points dropped for the Quakes and may be the difference between them making the playoffs or not.

What can we learn from the season Dallas is having?

Dallas looked like a lock-solid legitimate contender in the packed Western Conference from their impressive early-season results (only three losses in their first 15 games). Under Schellas Hyndmann, Dallas was more concerned with keeping their shape and passing the ball than rushing upfield as quickly as possible to cross the ball. There were some impressive results and Dallas seemed well-positioned to sustain their playoff position.

Dallas has two wins and seven losses over their last 16 games. Chivas USA, the laugh track of the Western Conference, has three wins over that same timespan, for those of you needing perspective. Kenny Cooper didn’t score between mid-May and early October with limited playing time. Blas Perez has 11 goals, but injuries and World Cup qualifying has seen him only play in 23 games. Neither forward leads the team in shots (midfielder Jackson does), suggesting getting the ball to the forwards is an issue.

As currently constructed, the Dallas roster isn’t good enough. Yes, injuries have hurt them this season more than most teams, perhaps, but they’ve also been unable to get the most out of some talented players when healthy. In a packed Western Conference, that’s not going to be good enough for the next several years.

What can we learn from the seasons Montreal is having?

Montreal came out playing interesting soccer and built impressive early season results. There was even talk of them being a Supporters’ Shield contender. While it would be easy to point to Montreal’s apparent average age and dependence on Marco Di Vaio, the season results show that Montreal only lost four times in their first 15 games, and only have four wins in their last 15 games (six losses).

Di Vaio has scored 19 goals this season but 15 other players have scored for the Impact. Montreal is the second-best scoring team in the Eastern Conference with 48, so it’s not dependence on DiVaio that is the issue. Are they too old? Certain of their players are more experienced, but then how do you explain the minutes given to starters such as Felipe Martins (23) or Jeb Brovski (24).

The answer is much more benign and unfortunately a significant part of the MLS narrative this season. There are no great teams. There are no teams with the roster depth to cope the travel, the changing weather, and the out-of-MLS competition. Montreal had their nice run of form early and so far that run of form has them in a playoff spot. It’s worth remembering they didn’t qualify at all last season.