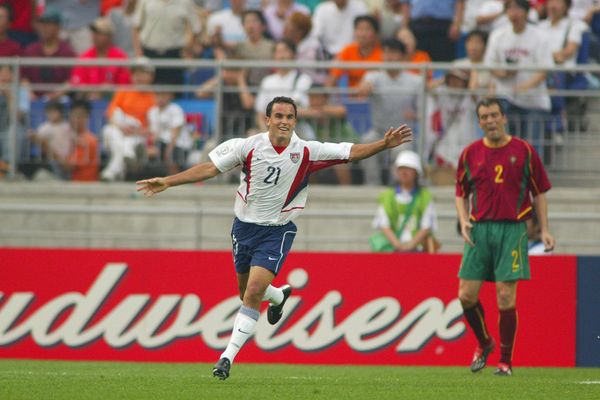 By Clemente Lisi – NEW YORK, NY (Oct 14, 2013) US Soccer Players – The 2002 World Cup finals in South Korea and Japan will go down as the tournament with the most shock results. Although Brazil won the World Cup against Germany, a game between two traditional titans, the third-place match featured co-hosts South Korea and Turkey, two surprise teams. Then there was the United States. The USMNT reached the quarterfinals – losing to Germany in a tight, controversial (more on that later) game – and had its best World Cup since finishing third in 1930.

For the USMNT, this was the first time the team showed any real depth. MLS was barely seven years old, but it had already helped get American players exposure to the rigors of a competitive league. Coach Bruce Arena had several options at his disposal. Aside from the core veterans – the team he brought to the finals averaged 29 years in age – he had many youngsters from the 1999 Under-17 World Cup squad. Joining Clint Mathis and Claudio Reyna was Landon Donovan and DaMarcus Beasley – the last two still active members of the US team – and Brad Friedel in goal. Although no one knew it at the time, this team was about to make history.

The USA entered the tournament having won just four World Cup finals games in 72 years. No one thought they could defeat their group D opponents Portugal in the opener, and co-hosts South Korea and Poland made advancing a tough assignment. Due to the time difference, the USA played Portugal on ESPN2 at 4:55am Eastern Time on June 5th. Those who got up early that morning were in for a treat.

Portugal, a team loaded with stars like Fernando Couto and Luis Figo, were favorites to beat the USA and win the group. Instead, it was the USA who won the game, 3-2, on a humid afternoon in Suwon thanks to goals from John O’Brien, an own goal by Jorge Costa, and a wonderful header from Brian McBride.

“We came into this game believing we could win this game, and our guys played a great 30 to 40 minutes in the first half that really won the game for us,” Arena told reporters after the game.

McBride provided what would be the eventual game-winner, sneaking in between two Portuguese defenders to slam home a diving header off a perfect cross from his former Milwaukee Rampage teammate Tony Sanneh on the right side.

“The important thing was to come out quick,” said McBride, adding, “We needed to make sure and put them on their heels and that’s what we did.”

The team played well despite some mixed results in the first round. On June 10, the USA tied co-hosts South Korea 1-1. Four days later, the USA lost to Poland 3-1. No matter. The Americans, with a 1-1-1 record, finished second in Group D (behind South Korea) and clinched a spot in the Round of 16, where they faced CONCACAF rivals Mexico. Again, this was a game that didn’t favor the US on paper, but the players on the field had other ideas.

McBride’s goal after just eight minutes and another from Donovan helped the United States cruise to a 2-0 win. While the Americans struggled to maintain possession, it was the team’s counterattack that helped win the game, catapulting them into the quarterfinals.

Javier Aguirre, who was Mexico’s coach at the time, recalled, “We usually beat them so to lose was a big deal, especially because it was a World Cup game. To me, the rivalry between Mexico and the USA started from that moment. That’s when it really intensified to what we see today.”

“It’s a great day for US Soccer,” US coach Bruce Arena said. “The gap has closed considerably” between the United States and world soccer’s established powers.

Arena was to test that theory in the quarterfinals. The Americans had caught the attention of the nation, who stayed up late or got up early in record numbers to watch.The United States and Germany faced each other on June 21 in Ulsan, South Korea. The Americans, playing a 3-5-2 formation that defeated Mexico, were the clear underdogs. But in a tournament where surprise results had become the norm, the Americans were feeling good that a win was possible. Starting at forward was Donovan in place of Josh Wolff and defender Frankie Hejduk was back in the starting lineup after serving a one-game suspension.

On a day where the Americans outshot the Germans 11-6, the USA could not score on Oliver Kahn. Even with the USA using the counterattack to scare the German defense, Kahn kept the Americans from scoring. At the other end of the field, a Michael Ballack header in the 39th minute was all the Germans needed to win the game 1-0.

Controversy was also a big part of the match. At a tournament where the officiating was less than stellar, the Americans were the victims this time around. In the second half, a shot by Gregg Berhalter bounced off Kahn and hit the left arm of defender Torsten Frings, who was standing on the goal line. The ball nearly crossed the line before Kahn grabbed it. Scottish referee Hugh Dallas didn’t whistle a penalty kick when repays clearly showed it was a handball.

When Dallas did finally blow his whistle to end the game, the American players collapsed to the ground. With the crowd chanting “USA! USA!” at the end of the match, the players walked off the field with their heads held high. Four years earlier, the Americans had lost to Germany 3-0 and finished last in the 32-team tournament. This time, they had advanced to the quarterfinals and showed the world they were no doormat, but rather a team that could get results at a major tournament.