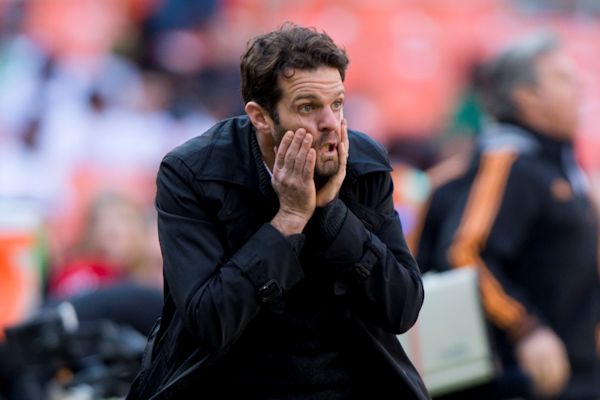 By Tony Edwards – San Jose, CA (Oct 29, 2013) US Soccer Players – In Tuesday’s column, Tony labels this season perhaps the worst in MLS history, looks at both sides of the Houston – Montreal play-in game, and salutes the teams that impressed in the final week of the season.

Has there ever been a club in a non-expansion season with worse goal differentials than Chivas USA and DC United’s -37?

Now let’s focus on the less-than-positive. Incredibly, you could make a case that this season was the worst season in terms of team quality in league history, as never before in a non-expansion year have two teams had worse goal differences than Chivas and DC have this season. -37 is tough to ignore. Some other examples include the 1999 Metrostars at -34 and the 2001 Mutiny at -36 in 27 games, but this level of negative goal difference is historic in a non-expansion year (for the record, in 2005, Salt Lake was at -35 and Chivas at -36). Combined with Toronto’s -17, the goal difference for the three worst teams in the League was -91. Yes, Chivas USA’s goal difference was worse this season than their expansion season.

Did anyone really doubt the Dynamo weren’t going to deliver on Sunday?

There’s no surprises from Houston. They are going to attack from the left. The opposing team will probably have as much or more possession. They have great set pieces. Their coach always builds a winner, even if they aren’t always easy on the eye. As always, the question becomes what have other teams in the Eastern Conference learned about how to stop the Dynamo in a short series. It’s easy to say ‘don’t give up set pieces near the box’ and ‘contain Brad Davis.’ It’s also easy to say ‘get a lead’ with Houston 1-11-4 when they give up the first goal in 2013.

How does Montreal, in a must win game, allow Toronto to have the majority of possession?

And not just by a little, but to the tune of 59% to 41%. The Impact also had only three shots on target, which is astounding given they had 74 minutes to chase an equalizer. Montreal spent the entire season confounding expectations. They came out of the gate playing attractive patient soccer and ended the season stymied and only in the playoffs because of flaws in Chicago and Philadelphia.

Which teams did step up this weekend?

Beyond Houston, let’s focus on the positives for a moment. The New York Red Bulls were as emphatic as you’d like a team to be in their situation. Portland saw an opportunity and took it. New England earned their spot and a home game this coming weekend. Let’s remember New England finished third, above Houston, Montreal, Philadelphia, and Chicago. Speaking of stepping up, impressive commitment by the NBC Sports Network to show tomorrow and Thursday evening’s play-in games.

Can you disagree with San Jose’s decision to give interim Head Coach Mark Watson the job permanently?

Reports started circulating on Sunday that Watson will drop the interim part of his job title, following comments from Quakes GM John Doyle last week endorsing the work Watson had done since he replaced Frank Yallop in June.

Under Watson, San Jose went 11-5-3 and won their Champions League group. Both of which are solid enough reasons to move forward with Watson. It’s a results oriented business and the results under Watson were good.

What didn’t change under Watson was the Quakes’ style of play, which was physical and mostly consisted of getting the ball upfield as quickly as possible, in hopes a Shea Salinas cross would find the head of one of San Jose’s three talented strikers. That there are teams in MLS who can’t deal with this style of attack still baffles me.

What Watson has now is an off-season to reshape San Jose, not just for the new stadium in 2015, not just for the matchup against Toluca in the CCL, but for a Western Conference that is only going to become more competitive as expansion looms. As currently shaped, which playoff team is San Jose better than?

El Salvador and Canada round out the Octagonal final round of Concacaf World Cup qualifying, both presenting interesting problems this fall.